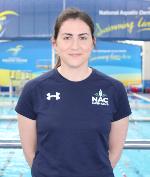 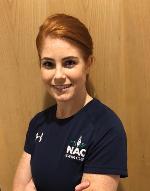 Niamh took over as Lead Strength and Conditioning coach of the NAC Swim Club Gym in October 2018 and brings a wealth of experience with her.

Niamh recieved a citation from Kukkiwon [Highest Taekwondo Authority] for her contribution to Taekwondo whilst attending a Kukkiwon Seminar.

In a coaching capacity, Niamh has attended European Chamionships & World Championships and has extensive experience at Elite level right down to grass roots development.

Having completed an honours degree in sports science she took a huge interest in the biochemical movement and exercise science during her studies and it was from here she continued on her studies into Strength and Conditioning. Niamh has worked in an S&C capacity with inter county level GAA, Rugby and Olympic level Taekwondo athletes and has now taken a keen interest in the sport of swimming, particularly youth swimming.

Niamh joined Paralympics Ireland in the summer of 2016 as the new Performance Operations Manager. She has also had the opportunity to work with some of the leading Irish para athletes in an S&C capacity.