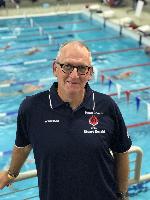 From swimming competitively with Beckenham, Addington and Croydon Amphibians swimming clubs, Stuart has always had a passion for swimming.  Having taught many children to swim in his spare time, he undertook his first ASA Teachers' and Coaches' qualification in 2006, quickly followed by his Level 2 in 2007 when he joined Sutton Atlantis SC as a part time coach.

In 2009, he decided to teach and coach swimming full time, working for Greater London Leisure, David Lloyd health clubs and various schools/clubs. Simultaneously, he devoted time to study for his ASA Teachers and Coaches Level 3 qualification, achieving this in 2010.

He was subsequently appointed Joint Head Coach of Sutton Atlantis SC, guiding the club to many county and regional successes with minimal resources.

In March 2014, he joined the coaching team at Guildford City SC, gaining valuable experience at a high level. In July of the same year, he took on the additional role of head coach at Elmbridge Phoenix as part of the ‘Pathway’ between the two clubs whilst continuing to work part-time for Guildford City SC with the High Performance and Competitive Development squads. This successful arrangement was officially ended in July 2017 when Stuart was asked by the committee at Elmbridge Phoenix to take on the role as Head Coach full time, and the club has continued to go from strength to strength.

With an ever-growing membership of swimmers aspiring for success at the highest level, Stuart works with a great group of committed coaches. Together with the dedicated committee at EPSC that share a combined vision, Stuart and his coaching team aim to achieve success at all levels in our sport and to continue guiding many athletes to compete and succeed all the way up to National and Para National level.

Despite the challenges of Covid 19 and the devastating effects on the swimming community, Stuart and the team are excited to be back striving to help EPSC swimmers achieve their goals and again pushing for County, Regional and National honours once again.

George has been a competitive swimmer throughout his life, competing both Nationally and Internationally, gaining podiums at Nationals and British Championships with 2 British Records in the 200m Freestyle. He has represented the County, Southeast Region and England Schools in a variety of competitions.

As well as being the Clubs Performance Coach, he is also Co-Lead of Age Group Performance with Glen. George uses his experience and knowledge from competing at a high level to fuel his passion for coaching and developing performance swimming. He has his Level 2 in Teaching Aquatics and an Advanced Apprenticeship in Sporting Excellence; this extends to a BTEC Level 3 in Understanding Sports Performance. 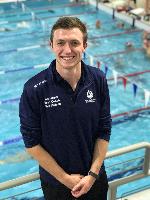 Glen has been a member of Elmbridge Phoenix since 2003. He has swum competitively for 15 years, going to the National championships on multiple occasions.

In 2015, Glen graduated from Loughborough University with a BSc in Sports and Exercise Science. During his time at Loughborough, he swum for the university team. After graduating from university, he became an ASA level 2 teacher of aquatics, as well as an ASA level 2 swimming coach. He has been able to use his previous knowledge and experience of competitive swimming to benefit others in the club. Glen is the Co-Lead for the Age Group Performance Squad with George

Glens passion for exercise and health lead him to completing NASM Level 3 Personal Trainer course. He now instructs the land conditioning sessions for the Seniors and Juniors, developing core strength, flexibility and mobility. In addition to this, he works in the gym with the senior swimmers to increase aerobic fitness, muscular strength and power, to improve performance.

As well as working at Elmbridge he also coaches at ACS International School in Cobham. His active lifestyle has meant he can represent the club and compete at team events, as well as swimming individually at counties and regionals. He hopes his sporting achievements can motivate younger swimmers to develop as athletes and encourage them to improve. 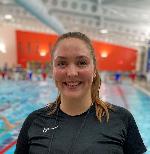 Lizzy Started her swimming at Teddington swimming club, whilst she was there, she swam at a National level, specialising in 800FR, 1500FR, 200Fly, 400IM and Open water swimming, competing for 15 plus years. Whilst at University, Lizzy swam at BUCS as her Uni swim captain, which consisted of coaching the lower squads whilst training.  She still trains twice a week with Teddington Masters when not coaching at Elmbridge.
Lizzy Started off her coaching career at Teddington swimming club, gaining her level two coaching at 18 years old, this year will be her 10th year coaching.  Alongside working for Elmbridge Pheonix, Lizzy teaches swimming of all ages and levels, and has her own illustration business.
Since joining Elmbridge in 2020 Lizzy has been very impressed with the Talent, she has seen at EPSC. She is excited to be heading up the development squads and looks forward to spending more time with them, she is passionate about pushing the club to its full potential as well as getting the most out of the swimmers.

Pippa (Pip) has been a competitive swimmer since 2011 when she first joined EPSC. She progressed through the squads and competed at her first Surrey County Championships in 2015 where her form stroke is breaststroke - although in Autumn that year she joined Woking SC where she subsequently won medals at both County and South-East Regional Championships, as well as competing in the Premier Division of the national inter-club Arena League. In Spring 2019, Pip returned to the Masters squad at EPSC. Pip has also been working at Elmbridge Xcel since she became an ASA Level 2 qualified swimming teacher in 2018 - and here she specialises in younger years. Prior to this she was also an Assistant Coach at Woking SC for two years. More recently she has completed CPDs to further her knowledge, including Integrating Autistic Children into Mainstream Swimming. In Spring 2021 Pippa joined the coaching team at EPSC and is already planning to do further coaching courses over coming years too. In September 2020 Pip began her degree course in Sport and Exercise Science at Portsmouth University, where she also swims on the Uni team. Pip has a passion for the science behind sports and wants to be able to apply her knowledge in areas such as physiology and biomechanics into everyday scenarios, as well as using psychology - and all of which can assist to find marginal gains and that valuable extra competitive edge. 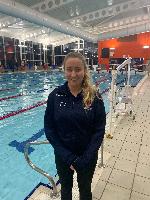 Grace’s swimming journey started when she joined Elmbridge in 2010, igniting her passion for swimming, competing at the Surrey County Championships with the Elmbridge relay team on multiple occasions. Alongside competing for Elmbridge, Grace was also a Corporal with The RAF Air Cadets where she also competed, winning medals at both county and regional level as well as finishing 4th in the RAF AC National Championships at RAF Cranwell, in 2016.

Grace’s swimming career was cut short, following a fractured femur but she went on to qualify as an ASA Level 1 and 2 Swimming Teacher in 2019 and now enjoys teaching both children and adults. She is also working towards her Babies and Toddlers CPD. Since returning to Elmbridge in 2021, Grace has been appointed Lead Coach of Senior Competitive Squad, overseeing training sessions, whilst also having fun!

In September 2020, Grace began her Geography degree at Royal Holloway University where she also swims with the university swim team. Outside of her studies, Grace has a passion for water sports, particularly kayaking and paddle boarding. In the future, Grace hopes to take up open water swimming.

Grace is keen to help swimmers achieve their highest potential whilst helping the club perform to its fullest extent. 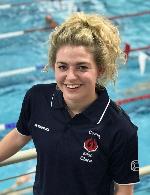 Having taught swimming to children and adults for 6 years, Manny wanted to ensure the children he has taught go on to competitive swimming. He is passionate about the Swim Active Programme because it welcomes non-competitive swimmers to continue their swimming journey for fitness and fun. As well as swim coaching and teaching, he is working towards being a qualified personal trainer. He enjoys training in the gym and swimming for fitness. Even though he works hard with the kids, having fun and enjoying their sessions is his priority. 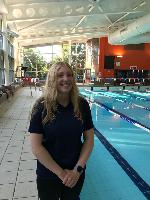 Cerys has been a competitive swimmer with EPSC since the age of 8 years old. At her first counties she won ‘Top Girl’ by gaining the most points in the 10/11 year old age group. Since then she has continued to qualify for the Surrey Age Group Championship each year, winning multiple medals in 2016, 2017 with her most recent being silver in both the 1500m freestyle and the 4x100m freestyle relay in 2020. She has qualified for the South-East Regional Championships for the last 5 years in largely the long distance freestyle events and has also been competing in Welsh Nationals for the past 3 years.

Cerys has been volunteering poolside with the club for the past 3 years and has enjoyed using her knowledge and experience of swimming to help the younger swimmers of the club. During the summer of 2021 she gained her Level 1 and Level 2 swim teaching qualifications and is now lead coach of Bronze squad. She focuses on ensuring the swimmers gain the correct technique as well as making sure her sessions are fun as these are both very important at this stage in competitive swimming.

Whilst coaching for Elmbridge Phoenix, Cerys is also doing A-levels in PE, Media Studies and Psychology. She hopes to go on to study something related to these subjects at university. 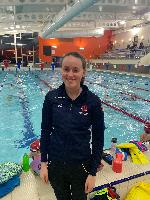 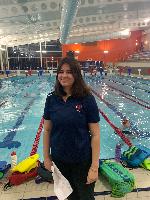 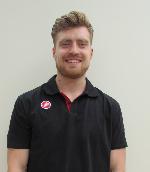 Strength and conditioning training is central to the long-term development of our swimmers, and as one of our land training coaches, Duncan plays a key role in our programme.

Duncan gained a degree in Physical Geography at the University of Portsmouth, and, after university, qualified as both a personal trainer and sports massage therapist. He has since worked with elite level rugby players (at the Premiership side, London Irish) and cyclists. He uses the extensive knowledge and understanding of the human body he has gained through his work outside the club to develop the strength and conditioning bases of our swimmers, and to raise their levels of overall fitness.

He is passionate about improving an individual's health and well being, something which he demonstrated to great effect when he helped keep our swimmers physically fit and mentally engaged as preparation for their return to the pool by regularly holding the club's land training sessions via Zoom during the pandemic-enforced lockdowns. 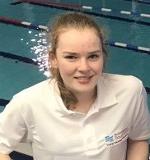 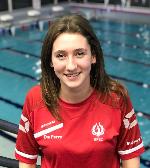 Swimming became a big part of Eve's life when she joined Elmbridge Phoenix at 9 years of age. After gaining her first county time for the 50m backstroke in 2013, she continued to train hard, and went on to win medals in multiple relay events at the Surrey County Championships, a silver medal at the South East Regional Championships in the 100m free, and compete at the English Nationals at Ponds Forge, Sheffield.
Eve started to volunteer as a coach at Elmbridge Phoenix for her bronze and silver DofE and, after almost three years of volunteering, she then went on to complete her Level 1 and 2 teaching qualifications.  She has now been teaching at Elmbridge Phoenix and two local swim schools for three years.
In September 2020 she started a new chapter in her life, studying Sports Science at the University of Birmingham. She is currently swimming with the High-Performance squad at the University, where she hopes to keep improving and adding to her swimming achievements.  She continues to coach for Elmbridge Phoenix during her holidays
Eve's focus is primarily on the younger squads, ensuring that they develop the correct techniques while enjoying their swimming. However, when necessary, Eve will also work with the Age Group and Youth Performance squads.