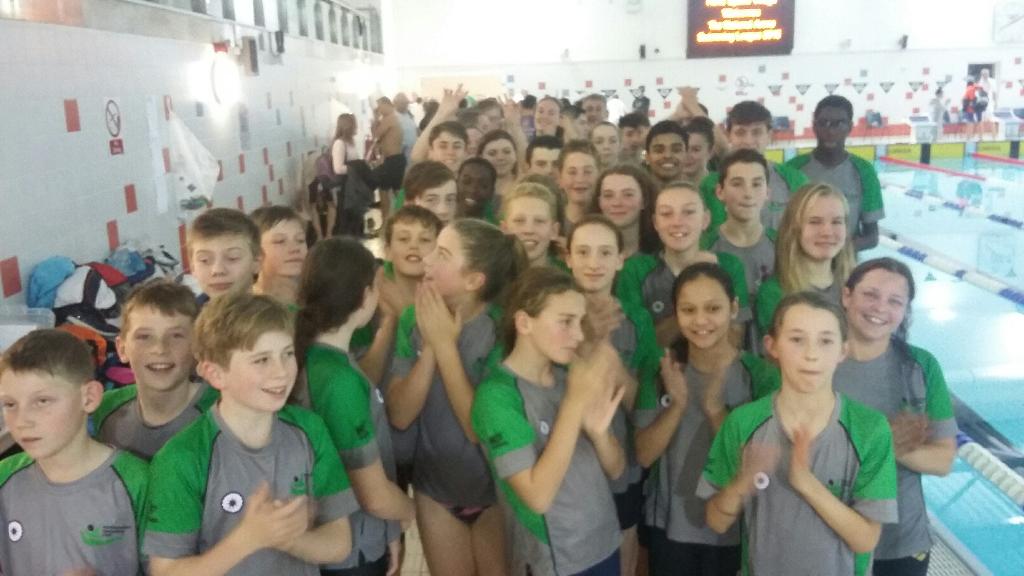 Berkhamsted SC hosted the second round of the National Arena League at the Herts Sports Village in Hatfield and after a whole host of excellent swims claimed a valiant 3rd place on the night after a 50 race duel with Hertford (4th), only decided in the final few relays. The whole gala was swum in an atmosphere of frenzied excitement although eventual winners, Putteridge were away and gone from an early point on the 50 events.

As hosts of the meet we needed a whole load of volunteers and officials to be able to run this meet and what a team we had, great evening thank you to everyone. Thanks also goes to those who relinquished their place on the swim team, those who had other possible events to go to and those who were not feeling 100%. Without you all and the great team work, we could not have done this

and I understand everyone enjoyed themselves if not slightly deaf afterwards.

Swimmers of the night were difficult to decide upon given how many super swims there were but, eventually the hats went to first timer Issy Whitaker who smashed out a 5 second improvement in her 10/11 years 50m backstroke, coming home off the turn to overhaul the early leader with a 39.16 and her first ever County Consideration time (CCT). The other awards went to Daniel Chennells and Ellen Northwood as they anchored home the Boys 14/15 4 x 50m Free relay and Open Girls 4 x 50m Medley relays. Dan Chennells posted his first ever sub 25 second swim with 24.96 after George Thorne (27.01) Yazeed Swarray-Deen (32.87) & Omar Swarray-Deen (30.09) had all swum faster than ever before to smash their combined pbs by nearly 4 seconds in 1:54.88. Ellen Northwood’s 29.61 saw her sub 30 for the first time in 2 years bringing home Molly Baker, Maddie Kiernan & Tracy Van DeVenter whose 50m fly leg was her first time under 35 seconds since her return (34.95),

The night had begun with Ellen Northwood swimming 3 seconds faster than the last round in her 200m IM (2:40.87 – improved CCT) and James Chennells collecting the first win of the night in the Boys’ 200m IM showing few effects from a 2-month long absence due to illness. Showing good race craft he kept enough in reserve to hold off strong challenges outside him in the last 25m with a super final length to show his class.

The Girls’ 9/11 200m Free relay squad of Lara Connell, Saff Harding & Ruby Liddle (both first time in Arena league) handed over to Eva Lawson (30.48) to post 2:28.50 followed by the boys with Cole Moore swimming his fastest ever 50 Free (35.52) taking over from Lawson Gray before handing the baton to William Barnes and Eric Batt.

The 14/15 Freestyle races saw a brace of 2nd places with Abi Hewson and Dan Chennells both leading early with good turnover & Dan Chennells setting a new pb and improved CCT with 1:07.19.

The good fly performances continued with Eva Lawson improving her pb and CQT down to 37.51 as she was a clear winner of the 10/11 50m Fly and Lawson Gray claimed 2nd for the boys.

Back to the fly, Issy Soulsby pocketed 3rd in a CCT of of 1:15.31 whilst George Thorne showed renewed confidence and superb underwater skills to lower his best to 1:09.41 and another 3rd place. Cam MacDonald’s improvements continue apace and after a more conservative start he dropped his 100m back pb to 1:08.75, an improvement by over 1.5 seconds to claim his first CCT of the year.

Cole Moore set a pb in the 50m Breast of 51.40 and Lydia Wisely looked smoother than for a while in her 100m fly for another 3rd place and Ben Holmes-Higgin went pb in his fly with a small improvement to 1:26.51.

Issy Soulsby picked up 2nd in the 100m Free and then Dan Chennells romped home to win the 14/15 100m Free for boys, leading all the way and extending his advantage off every turn to win by almost a second and a half.

The final first-time swimmer in an individual event was Joe Harrison who had to wait a while but made it worthwhile as he smashed 4 seconds from his best with a strong second half performance climbing to 3rd place and his first ever CCT (36.51) and then Abigail Briers pinched 2nd place in her 100m free dropping 0.07 seconds and improving her chances of getting into the County 100m Free event.

George Thorne was on fire again in the 100m Breast as he improved over 3 seconds for another 3rd place in 1:20.19 and then it was the final individual races, the Open 100m Free events.

Ellen Northwood finished her 3 races meet with a fighting 1:06.02 for yet another CCT and then Ish Rahim went 56.32 in a tightly contested race for 3rd again.

The final round of relays saw Saff Harding and Eva Lawson swim their best 50m times for the breast & free respectively as part of the Ruby Liddle, Saff Harding Issy Whitaker, Eva Lawson team for the 9/11 girls’ medley as they came home 2nd in 2:48.87. Eric Batt, William Barnes, Lawson Gray & Joe Harrison claimed 4th in their medley and then Alex Farnham, Daisy Laing, Emma Hockney & Abigail Briers teamed up for yet another third in their free squad race.

The last two races of the night are always the 6 x 50m free Open relays and the already loud support gets ratcheted up even more. After Ellen Northwood’s lead off leg, Tracy Van Deventer, Victoria Ayles, Maddie Kiernan & Issy Soulsby all set their fastest relay legs (32.05; 32.13; 31.09 & 29.70) and it was down to the boys to round off the meet.

Ish Rahim posted 26.22 off the blocks to come home 3rd after the first leg. Dan Chennells hammered round in 25.66 to move the squad to pole position. Callum Bullock (28.15) just about held that place followed by Cam MacDonald (27.87) and Harry Thorne (26.55) as the squad battled to hold off a fighting Watford team but they gave James Chennells a slight advantage into the anchor leg and he did not disappoint. Showing all his class he powered away with a 24.21 to come home almost 3 seconds clear in the final analysis to complete a fantastic night of entertainment.