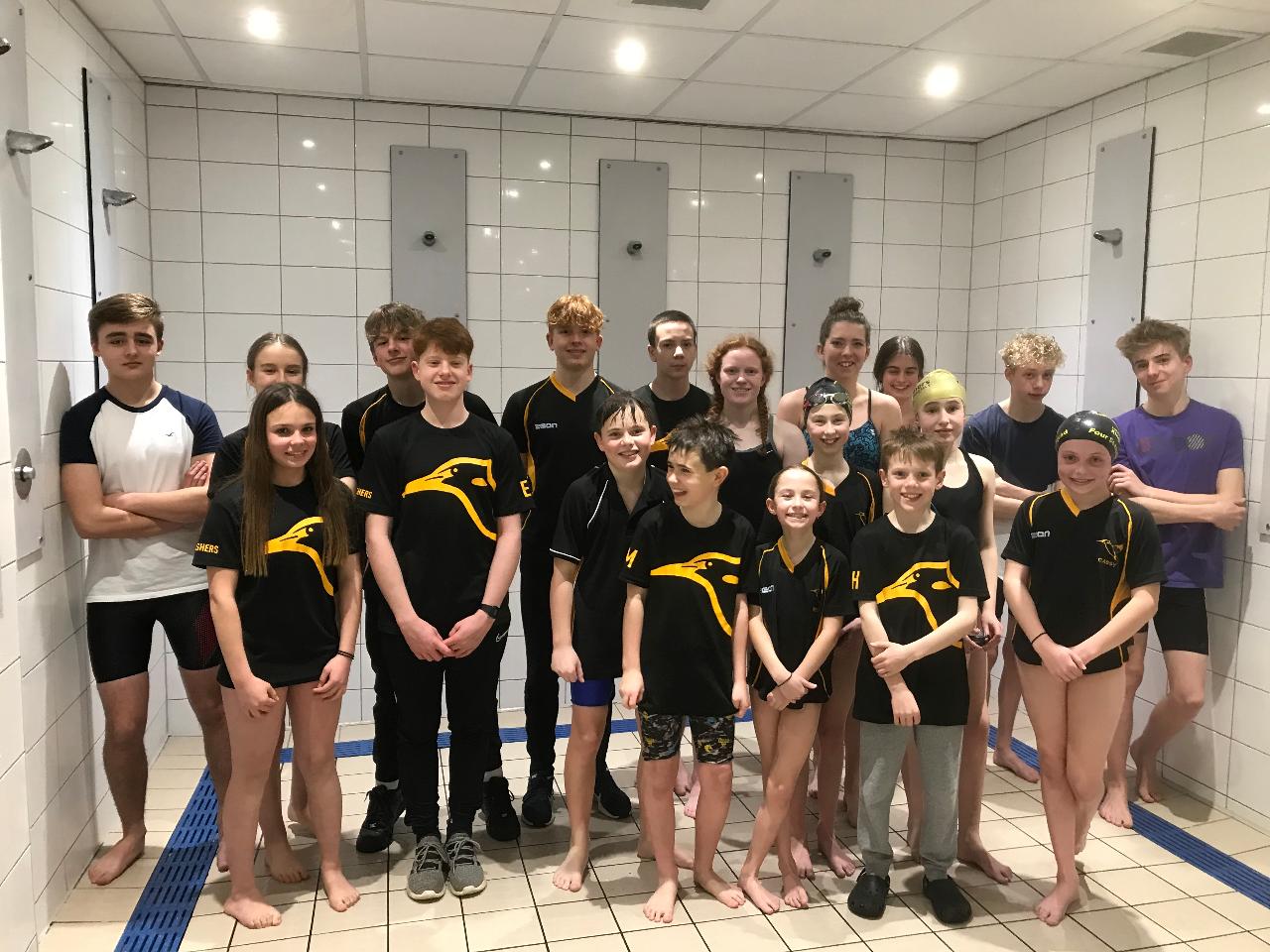 Cheddar Kingfishers hosted the third round of the Cotswold at their home pool at the Kings of Wessex Leisure Centre on Saturday, 7th March, competing against Dursley, Bristol Penguins and Brockworth.

Diving in to the pool with a cracking start was Olivia Iles swimming the girls 15/u Individual Medley, comfortably winning her race, with Henry Reid coming 3rd for the boys.  Continuing the Individual Medley racing, Naomi Pollard and Harry Read swam in the Open category, finishing a close 2nd and 3rd respectively, with Cassy Iles and Ewan McClumpha representing Kingfishers in the 25m 11/u Freestyle race.  Grace Hurst swam in the girls 13/u Breaststroke 50m race, finishing a very close second, with Charlie Halford racing for the boys, also finishing a close second.  O Iles and Reid swam their next race in the 15/u 50m Backstroke against strong competition, finishing 3rd and 2nd respectively.  At this point in the competition, after the first 10 races, Cheddar were sitting in 3rd position, but clawing points back, Lucy Slingsby and Jeff Hill swam the 100m Open Butterfly race, both finishing 1st.

G Hurst and F Halford both swam a very exciting and close 15/u 50m Breaststroke race, both coming 1st, with Emma Noyce swimming the Open 100m Backstroke, leading the race and finishing a comfortable 1st, Sam Easton swimming for the boys and finished 2nd.  Jemima Seagrove had a very strong swim in the girls 13/u 50m Freestyle winning the race, with F Halford finishing 2nd for the boys.

The 15/u girls Medley team of Megan McClumpha, O Iles, G Hurst and Seagrove finished 1st , as did the boys team of Reid, F Halford, Ed Hardman and Issac Nicholls.  The Open teams continued the success with Noyce, Naomi Pollard, Slingsby and Josie Morgan winning for the girls, and for the boys S Easton, Read, Hill and Simon Toogood also winning the Medley Team race with a considerable lead.

Following on from the 11/u 25m Backstroke, swam by Bird and E McClumpha, Kingfishers moved to 2nd place, just 3 points from the leaders Brockworth.  Iles swam another outstanding race for the girls 13/u in the 50m Butterfly securing another comfortable win, with Josh Easton swimming for the boys.  M McClumpha and Nicholls both won the next race, the 15/u Freestyle.  Pollard swam a very strong 100m Breaststroke for the Open category, finishing 2nd, with Patrick Forrester swimming for the boys.

More great Relay swims from both the 11/u and the 13/u girls and boys teams meant that at this point of the competition, scores were extremely close to the leaders.  Swimming strong Butterfly races for the 15/u was Holly Cockram and Jack Brimm for the boys, who finished 1st.  Pollard and Toogood both came 2nd in the Open 100m Freestyle, C Iles winning the 11/u 25m Breaststroke and J Hutchinson finishing a close 3rd, pipped at the end.

The last 4 races, 15/u and Open Freestyle team races were all won with much excitement and cheering from the Kingfishers team and supporters, knowing the scores were now very close to the leaders.  The last race of the evening was the exciting Canon race, with C Iles, E McClumpha, O Iles, F Halford, M McClumpha, Nicholls, Pollard and Read finishing 2nd, clawing back 2 places in the final lengths.

The final score saw Cheddar Kingfishers finish a close 2nd place behind leaders Brockworth, scoring 153 points, only 5 points behind the leaders.  Kingfishers are now lying 11th place on the league table, with one more round to go on the 28th March in Bristol.