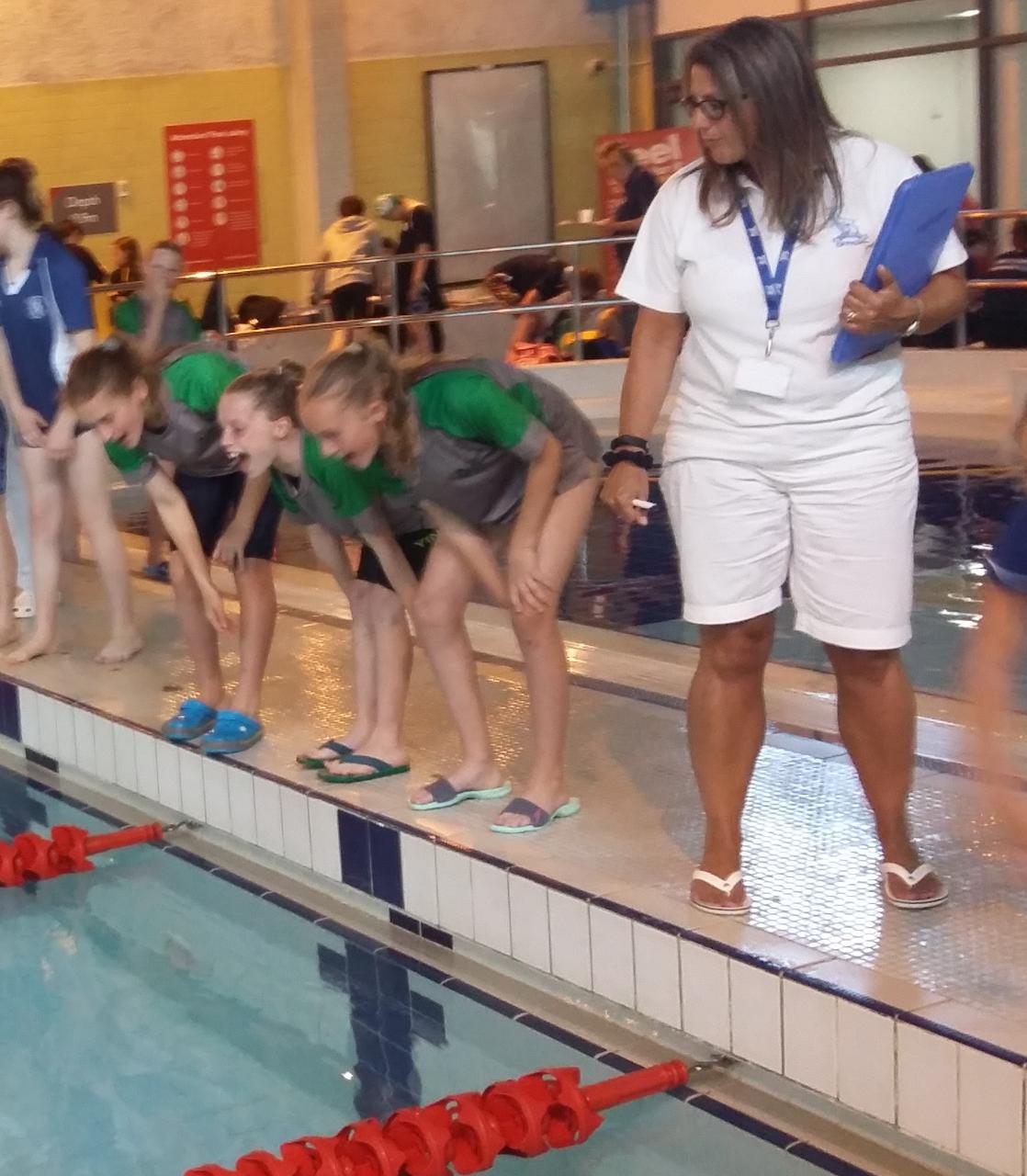 After the heady excitement of Regional Youth Champs and Herts Peanuts league it was back to Grass Roots at its best for Berkhamsted athletes in the superbly organised Hemel Hempstead SC Spring Development Meet at Hemel Hempstead Leisure Centre on a very warm weekend.

With 84 swims over the 2 days there was plenty of reward mixed with some disappointment as the swimmers went through the whole gamut of emotions. With the meet designed towards novices and those competing on their ‘off’ strokes it was a really enjoyable meet for all involved.

Saturday began with the Boys’ 100m IM and James Bevan kicked off proceedings with a 4th place pb in 1:34.41 in his first attempt at the race. He later backed it up with a silver medal in the 14 years 50m Fly lowering his best by over 8 seconds to 42.00.

George Thorne was also up for the 100 IM and a clear winner of his heat, also slashing off 8 seconds from his best in 1:11.65 to collect the club’s first speeding ticket (beating the quickest entry time allowed) of the 2 days in emphatic style.

After James Bevan had claimed his 50 Fly silver, George & Harry Thorne put on a master class in the 15 & over fly section to come home 1st & 2nd, both getting speeding tickets in pb times and Harry dipping under 30 seconds for the first time.

Eva Lawson & Jemima Cadge were back again for the final event of the first session, the 200m back. Lawson made it 2 speeding tickets from 2 races with 2nd place in the heat and a 3:20.56. Jemima Cadge picked up the bronze with 3:29.75 as both completed the event for the first time.

After a short break the Saturday night session started with 200m Free for Boys. Cole Moore, Joe Harrison, David Graham & Cam MacDonald joined the party for the first time. Cole Moore & Joe Harrison set things off in the same heat with Cole chopping an enormous 25 seconds from his previous best, posting 3:15.10 for 5th place overall and 9-year-old Joe winning the personal battle in the last length with 3:13.44 (27 second best time) and yet another speeding ticket. Another big chunk was taken off by David Graham who improved 22 seconds to take 13 years 5th place in 2:39.56 before Cam MacDonald set off at a furious pace to lead his heat for the first 100m before succumbing to place 2nd over all and in the heat in another new pb of 2:16.78. All 3 of Cole Moore, Joe Harrison & David Graham showed how far they have come by also setting pbs at 100m on their way to their final times.

Pierce & Ronan Philbin’s first race of the meet was the 50m back with Pierce winning his heat (5th overall) & Ronan Picking up his age group silver in 43.46 & 43.40 respectively, whilst Harrison dropped a couple of tenths from his pb to go 51.73 and bronze for the 9 year olds.

David Graham picked up silver in 37.73 (pb) and Cam MacDonald stormed home to win heat and fastest of any age group on the day in 32.11 for Gold.

Showing her strength, Eva Lawson comfortably claimed heat win in the 100m fly and yet another speeding ticket with 1:43.72 and will have learnt a lot on how to pace the event from this outing, having set a new 50m pb at half way. Abbie Briers would have smashed her pb but for falling foul of the arcane laws of swimming at the first turn but showed just how fast an all round swimmer she is becoming finishing in 1:24.75.

In the boys’ 100m Breast Cole Moore & Joe Harrison were again competing for the first time. This time Cole Moore just came out on top ducking inside 2 minutes with 1:59.97 for bronze whilst Joe Harrison was a fraction outside the 2-minute mark in 2:00.34 but the 9-year-old was still fastest in his age and another speeding ticket in the bag.

The 100m Back saw Eva Lawson complete a clean sweep of Speeding tickets from her 4 events of the day in 1:32.97 and then Jemima Cadge & Anna Giacomantonio competed against each other in the following heat with Jemima Cadge (5th overall) just outpacing her club mate (1:53.72_ as they took 5th & 6th in the 11 years group.

Briers finished her day by finding another way to upset the judges with a slight mis-judgement at the first turn when, again, she swam so much faster than ever before for what would have been a 19 second lowering of her pb. Tomorrow would be another day.

The first day finished with Joe Harrison and David Graham taking on the 200m Individual Medley (IM) and a further silver for David in 3:03.40, an improvement of 7 seconds. Joe made an error on one of his turns as he tired and was disqualified but can take pleasure from his time of 3:54.09 on his first effort at the event.

Onto day 2 and Alex Kalverboer gave evidence of intent for the coming season with an explosive start to his 200m Butterfly. By the 100m point, which he hit a pb for 100m of 1:27.30, he was already a length ahead of the rest of his heat and 25 seconds ahead of his pb pace. Keeping the pressure on in the second half, he destroyed his previous best time by over 57 seconds to take the fastest speeding ticket in a time that, if he can repeat it between 1st June and 31st December, will qualify him for the Herts County Champs in 2018.

In the Girls’ 100m IM Nell Coster picked up silver 9 year old with a 1:45.16, also taking 2nd in her heat, with team mate Issy Kalverboer chasing her home in her own pb for 7th overall in 1:53.79. Anna Giacomantonio sliced 11 seconds off her best (1:44.47) and Jemima Cadge took bronze in a new pb of 1:37.62. While Abbie Briers twitched at the start to take another D/Q for a false start she would have been another pb in 1:21.48 but it was left to Lara Coster to hammer out a heat win and claim the fastest speeding ticket for the 12 year olds with 1:22.13 dropping more than 21 seconds!

For the boys’ 100m free the Ronan & Pierce Philbin brothers both set pbs and took 4th places in their age groups with Pierce just winning the sibling battle in 1:25.06 to Ronan’s 1:26.25 then George & Harry Thorne battled head to head in the final heat. Harry led off at a frantic first 50 pace as both boys turned in 28 seconds and just held off his brother’s late surge in the final 25m to claim Gold in 1:00.81 and George with another pb taking the 15 years gold edging closer to the 60 second barrier with 1:01.13.

In the 50m Fly Nell Coster picked up another silver with 51.55 (pb) and Jemima Cadge was 7th with 52.32. Eva Lawson continued to collect speeding tickets with 42.18 chopping another 8 seconds from her best. Lucy Bevan claimed 6th place going inside a minute for the first time with 51.99 and Lara Coster and Abbie Briers carved up the 12 year age bracket. Much to Abbie’s relief this swim was legal and yet another improvement as they both set huge pbs to claim 1st & 2nd fastest speeding tickets with Lara in 38.89 & Abbie 37.28.

With the final session underway Lawson showed admirable resolve as she blitzed her heat to touch first in 2:55.88 and 3rd fastest speeding ticket. Anna Giacomantonio reduced her best by 36 seconds! Her 3:18.37 was 13th fastest and Cadge won her heat with 3:08.05 (37 second improvement!) for 9th.

Issy Kalverboer took home the 5th place medal in the 100m breast (2:16.11), Jemima Cadge another bronze (1:51.32) both in personal best times before Briers resurgence continued with 4th place in 1:41.55 almost 5 seconds faster than she has managed before.

The final event of the 2 days was the girls’ 200m IM and, again, they rose to the occasion despite the tiredness. Jemima Cadge finished the race for the first time with 3:35.11 and Eva Lawson made it 8 out of 8 speeding tickets with a classy 3:18.91 on her first attempt at the event. It was left to Abbie Briers to show just how strong her resolve is and how much of a racer she has become. The youngest in her heat (the fastest one of the event) she was aggressive from the start of the fly leg and held the eventual winner until the breaststroke 50m. With 25m to go she was in 3rd place in the heat after her least favourite stroke. However, with previously unseen determination she stormed off the final turn and put clear water between herself and the eventual 3rd placed girl, taking her pb down by 9 seconds in 3:01.00 and another speeding ticket. Her determination after the first 3 d/qs was a lesson to others not to let mis-fortune get you down but bounce back stronger and more confident for the future by learning from everything that happens.