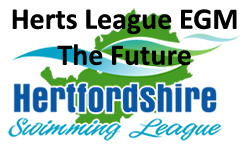 The purpose of this meeting was for members ( Herts Swimming Clubs) to discuss a number of options that had been put forward by the Committee to address impending issues.

From a BSC perspective for Peanuts, we made the decision this year to put two teams in as we have been trying to resolve a number of requests from parents where their swimmers were not getting the opportunity to swim in the team as we only had one team.

The issues raised by Herts League were as follows;

There were a number of options on the table as examples of where changes could be made to redefine the leagues, worst case being they are stopped completely.

Various options and positions were discussed and members voted on the key elements.

In summary the membership agreed the following based on a majority vote, these will now be raised at the AGM in October prior to finalising these within the League rules.

There were also discussions on the timing of the meets. Pools are now reducing the time available to Clubs and organising groups, to hold competitions as well as training, this is compounded with the limited number of 8 lane pools available in Herts, which  makes it very difficult to book a meet at a reasonable time.

Identified as an issue by some Clubs was when the events are scheduled during holiday times, this again was significantly limited to pool availability, but was noted.

The BSC Committee will be reviewing the number of teams for Herts Major and Peanuts prior to our submission in October for the 2019 season, we will only submit two teams if we really feel that BSC members will support this.

​If you have any feedback on this, please fee free to email Steve Moren BSC Chair at chair@berkosc.org.uk.