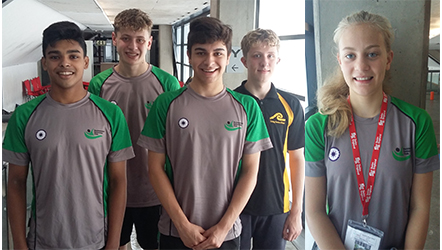 The 50-week long swimming year came to an exciting conclusion for Berkhamsted Swimming Club with the week-long English Summer National Championships at the iconic Ponds Forge facility in Sheffield. With four swimmers representing the club in 5 events, it was a week that built to an exciting climax alongside Tring SC’s Sam Pye-Finch.

James Chennells began the week with the 200m Freestyle. By now an experienced competitor at this level following his debut in 2017 he knew what to expect. The English Championship take 20 swimmers in each age group for each stroke and distance with very little separating the first seeds from the 20th seeds.

James was seeded 14th going in a was well aware that only a pb would see him in with a chance of making the top 10 for the evening final. After a solid first 50m in 27.19 he consolidated his position to halfway in 56.93 with good skills round the walls and a strong stroke. As tiredness hit with just over 50m to go his stroke started to shorten as he tried to pick up the pace and he touched in 1:58.54 a pb by almost ¾ of a second and placed him 11th, just one place and just 2/10ths away from that elusive place in the final. This swim improved his own club open record from May.

Ella Nijkamp was next up in the 50m backstroke. Making her debut at Nationals at the age of 13 following a superb victory in the East Region champs at the beginning of the summer, she was understandably nervous ahead of her race. In the event, she posted her second fastest ever 50m backstroke with 32.45 and might be ruing her finish, which she said was not up to her normal standard as she too just missed out on a final, placing 12th overall in the 13 years age group, but she should be exceptionally happy with her first race at Nationals.

The last 3 events for the Club’s athletes all happened on the Saturday. With Ismail Rahim & Zac Patel lining up alongside Sam Pye-Finch in the 50m Fly and James Chennells up again in the middle distance 400m Freestyle.

The flyers were first up with Sam, also in his first nationals and a ‘year young’ in the 13/14 age group which is a great success in itself, in the first heat of the event. Sam got off the blocks well and hit the finish 1/10th of a second inside his old pb with 28.59 and finished 13th overall.

15 year old Ish Rahim was yet another first timer and anxious to do well following Regional Champs where he felt he did not do himself justice. A good underwater phase off the block saw him in about 5th place at half way. Once into his full stride however, he ploughed through the field and touched home in 27.05, chopping just over 0.3 seconds from his best and placed 2nd, with a wait to see if he had made the final.

Zac Patel was in his second year at Nationals and waited confidently for his own race 3 heats later. His weakness has been his starts and finishes and he felt his start here left room for improvement but, like Ish he showed strength of character to move through the field in the second half of the race to hit his own pb of 26.56 with a well spotted finish and another anxious wait.

When the results went up both Ish & Zac had made their respective finals as 5th & 7th fastest and went away to prepare for their finals.

James gives his all in training and deserves everything he achieves at the longer distances. In his 400m Free he had a slightly slower reaction to the starting signal than is usual for him but paced his race exceptionally well. 5th at 50m in 28.45 he maintained that to the end of the first 100m in 1:00.61 as the leaders created a gap to him and the others. As he gradually built the middle part of his race he was in 3rd with 50m to go where, with a storming last length he hit the front in the last 5m to take his heat in a 3 second pb and new club record of 4:14.15 which is also quicker than his short course best as well as an Open Club Record, his second of the week. Unfortunately for him he placed 11th again, missing yet another final by just 2/10ths of a second but he, again, should be delighted with his level of performances in his GCSE year.

Onto the 50m Fly finals, Ish went first and, although recording 27.10, which would still have been a pb if not for his morning swim placed 9th and felt a slightly deep and too long underwater phase at the start had cost him breakout speed which is crucial in such a short distance event. He was nevertheless delighted to have made a final in his debut at Nationals and is determined to improve on this in 2019.

Zac by contrast shortened his own underwater at the start and used the increased speed at the surface to swiftly move down the pool, spot his finish perfectly and move up a place to 6th in yet another pb of 26.34 which is also an Open Club Record.

So, at the conclusion of the meet, the Club’s swimmers had achieved a total of 7 races (including the 2 finals) 3 Club records and 5 personal best swims, a 6th, a 9th, 2 x 11th and a 12th places at English Nationals, in total, the best ever consolidated set of results in the Club’s 5 years existence with promise of more to come next year.