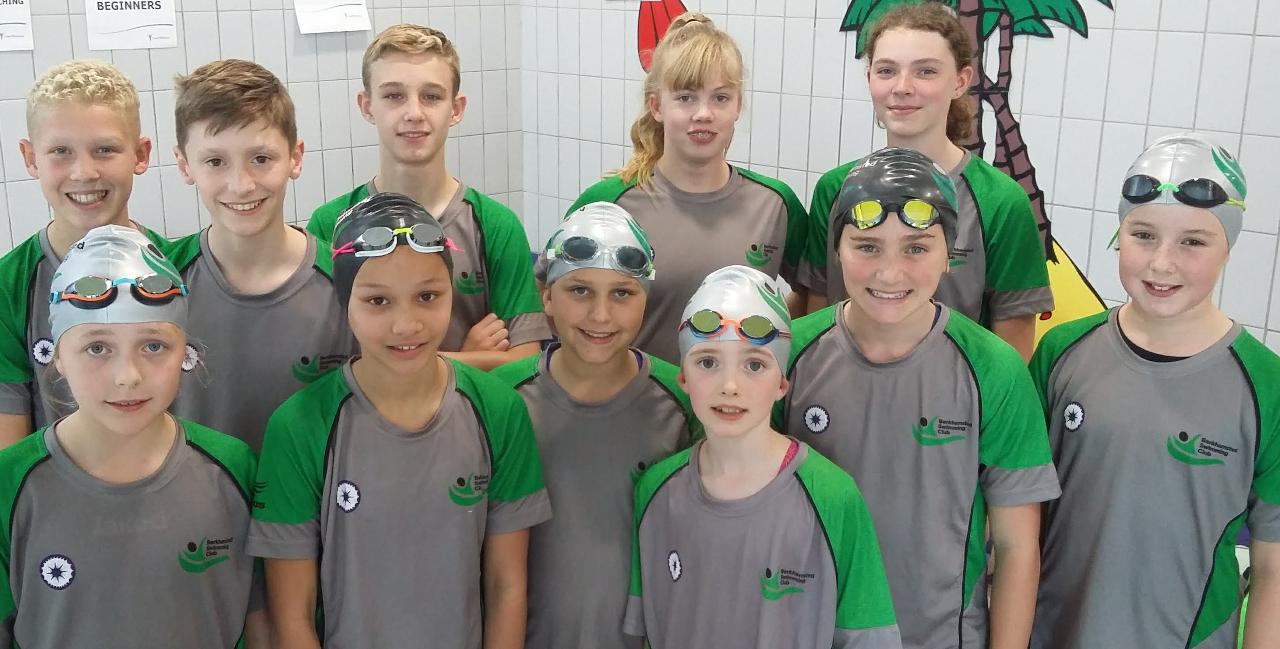 It was great to see a number of new swimmers enter the affray of competing for the first time, well done to you all.

The 2018 / 19 Open Meet season started with a bang for the 26 swimmers from Berkhamsted who attended and swam with speed and skill throughout the 1 day, 2 session meet.

The day started shakily with Lydia Wisely some 5 seconds outside her 200 IM pb but still placing 5th in age and Abbie Briers mistaking the false start rope for the 5m flags and rolling onto her front some distance too early, resulting in a disqualification but both responded well as the meet looked up for all the club’s athletes.

In the 50 Free there were pbs for first time Open Meet swimmers, Heidi Batchelor-Hannaby, Rachel Little (both just 9 years old), Ciara McKenna, Olivia Bridgeman, Bella Walker, Isabella Kalverboer & Lauren Farnham with Bridgeman inside 50 seconds for the first time. Lucy Bevan in just her second meet dropped inside 40 seconds & Phoebe Goss smashed out her own sub 40 (39.05) to win her heat and a spot prize as well. Eva Lawson proceeded to pick up the first medal of the day with Gold in the 10 years age group, improving to 32.94 with clear water to her opposition in the heat, whilst Abigail Briers banished her IM demons to claim bronze in 32.25 and Izzy Sansom & Lydia Wisely were just outside their bests.

In the boys 50 fly Pierce Philbin would have set a pb but for having a fractionally early start causing his d/q, brother Ronan clocked 44.65 & Alex Kalverboer 38.80. However, the swim of the event came from James Bevan, again in only his second meet who dropped over 3 seconds to post 38.75 and be fastest BLC male.

Next up was the girl’s 100m Back and Issy Whitaker picked up her first medal in her first event of her first meet as she shone with 1:30.22 to take 10-year-old gold whilst Izzy Sansom claimed Open bronze with a very smooth 1:21.05.

The girls’ 50m Breast saw Olivia Bridgeman, Ciara McKenna and Heidi Batchelor-Hannaby fall foul of swimming laws but Rachel Little took 2nd in her heat as she lopped off 8 seconds from her best, Isabella Kalverboer was also 2nd in her heat with a pb of 1:01.26 and Phoebe Goss improved nearly 5 seconds to 53.83. Lauren Farnham was delighted to go 55.41 (pb) and Lucy Bevan made it 2 pbs from 2 swims, finishing just outside the 50 second barrier but over 3 seconds quicker than before in 50.61. It was then down to Eva Lawson to take another gold in possibly her weakest stroke as she smashed out another heat win and 1st place for the 10-year olds in 47.51.

The second session started with the 200m free for the girls and with a bang for Eva Lawson. Storming off the start, she turned at half way in 1:15.53, which would have been a 100m pb before her morning swim, extended her lead to almost 15m at 150m and stopped, having miss counted the number of lengths. Stationary for a good 4 seconds plus before hearing officials and coaches urging her to continue she posted a final 2:39.58, still managing to win the age group by more than 15 seconds and lowering her previous best by over 16 seconds, such was the size of her win.

Abigail Briers and Izzy Sansom both posted 2:36 times for their 200m free.

Their first event was the 50m free and all improved. Ed Eastaff knocked off 10 seconds clocking 52.40, Ben Hanbidge some 3 seconds with 52.07, Clements another 2 seconds in 44.98 & Riley Milne 41.74, improving just over half a second. Experienced hand Tom Stoker swam with much improved technique to record a heat win in 32.81 and pick up his age group bronze medal.

For the Girls’ 50m Fly Isabella Whitaker started the ball rolling with a 4th placed 43.01 and an inaugural base time. Ciara McKenna clocked 1:30.84 for 7th, Ellie Pitcher 51.94 (pb) and then, once more, Eva Lawson triumphed with 38.69, just off her best time but more than enough for another gold.

Tom Stoker showed good form again in collecting a second bronze of the day in 1:34.22 for the 100m back and then the girls were back in for their 100m Breast and Ellie Pitcher went just outside 2 minutes for her first attempt at stroke and distance.

Heidi Batchelor-Hannaby was delighted with her 1:04.16 first try at 50m back showing good skills as did Little (8th) just missing the one-minute barrier with 1:00.01.

Biggest cheer of the night came for Ciara McKenna, who is Down-Syndrome and having to compete on ‘unequal’ footing in these Open meets with able-bodied swimmers but who took bronze in the Open age group, much to her evident delight. Olivia Bridgeman improved by more than 3 seconds to hit the pads in 53.44 and Farnham won her heat with 51.34 seconds.

Ellie Pitcher posted 1:49.54 in yet another first-time effort, Lydia Wisely and Abigail Briers went 1:27 & 1:25 but Evie Lawson claimed a clean sweep of gold medals and pbs taking her age group in a stunning 1:26.42 to finish a superb day for the Club’s swimmers.

Finally in the girls’ 50m back, Izzy Sansom took Gold alongside Ciara’s bronze and in the 200m IM Abigail Briers picked up silver.