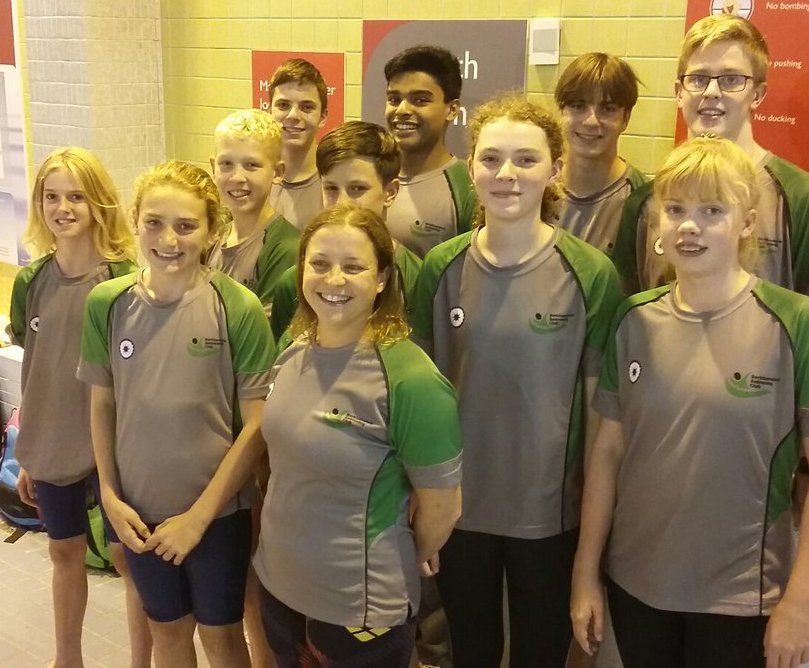 In the pool, the Open meet season is already in full swing and 10 from the club took on the 200m Butterfly at the now annual, Hemel Fly fest. As usual, the meet was superbly organised and a total of 24 heats of 200m fly races were held across just over 2 hours for 140 swimmers, more than you will ever see doing the event at any other meet.

A big thank you first to our volunteers, officials & coaches, without whom we could not support our swimmers - Mark Strakosch, Natalia & Tracey Moren, Tara Bullock & our coaches Christine Thompson & Geoff Wood.

First up for the club was 10 year old Eva Lawson who continued her winning streak in fine fashion. As the youngest female in the event she swam against competition up to 6 years older in her heat and stormed off the blocks to set a new pb at 100m (1:35.52) some 8 seconds faster than her previous best. Cleaving through the water she eventually touched home in 3:25.93 finishing in 2nd in her heat and fastest 10 year old. Her finishing time was not only a new pb but also a club record smashing the previous best by some 34 seconds! It is also enough to qualify her for the County Champs in January.

Next up were Tamsin Moren (13) and Chrissie Soulsby (11). Chrissie, in her first effort at the event came home in a highly respectable 3:41.31 whilst Tamsin smashed her own previous best of 3:42 clocking 3:25.74 and placing 11th in her age group as she returns to full fitness after injury during most of 2018.

Lydia Wisely plugged home in 3:42.35 before Abbie Briers swam smoothly in her first effort at the 200 Fly to post a County Consideration time of 3:20.71, good enough for 12th place in the 12 years group.

Alex Kalverboer was first of the boys on the blocks and after a week of illness following the Hoddesdon Novice meet which had seen him have to withdraw from the final event he was feeling the after effects. This did not stop him putting up a spirited show in which, in reality he started too fast with 1:31.54 at half way, ending with 3:22.22, some 6 seconds outside his best but still enough to gain him entry to next year’s Counties and 9th on the night.

Tracy Van Deventer was fastest Open female in 2017 and successfully defended that position as she showed age is no barrier to improving with the right attitude and training commitment. Having turned at 100m just 1 second slower than her 2 year old 100m pb she held stroke and form together to come home 2.99 seconds inside her previous best and second in the heat. Her 2:55.88 was fastest of the Open Girls by nearly 10 seconds.

Then it was over to the older boys. Callum and Harrison Bullock & Owen Strakosch all paid for their Serpentine swim earlier in the day but showed what is possible if you have the desire to just, ‘get in and swim’. Harrison reversed the placings from the morning 1 mile with his brother, pipping Callum with 2:56.22 against 3:04.14 whilst Owen won the intra-club battle of the 16 year olds with 2:50.48.

The final competitor was Ish Rahim and, as ever the racer that he is, he went out hard in a race that will find any weakness in fitness or form. With a sub 30 first 50m he slowed slightly at half way and was, to quote him, ‘In a world of pain in the last 35m’. He finished  as 3rd fastest 15 year old just 3 seconds off his best (less than half a second a length) in 2:26.37.

The meet showed that, even with limited pool time available, the Berkhamsted swimmers should not be afraid of taking on the tougher events in the programme and can learn a lot about themselves if they do.

We hope to send ever more numbers to open water events next year after the successful launch of our Open Water section in 2018 and as coach I hope that we will see more swimmers taking on the middle and longer distance events, including medleys, in the pool. It has been a good start to the season with the Hemel Birthday and Harpenden Legacy meets coming up in a fortnight or so’s time.