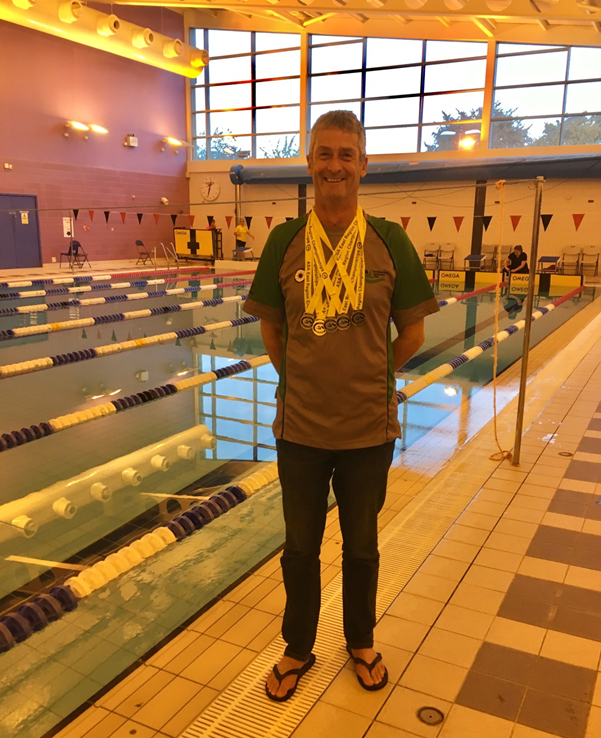 It was a relatively quiet weekend for Berkhamsted’s swimmers with only Mark Strakosch involved in the East Region Masters Champs in Newmarket and Tilly Anderton (now at Millfield school) competing in the Somerset Development meet.

Mark was, as usual, a multi-medalist at the Masters meet despite, in his words, ‘my form strokes being worse than my free’.

Next up was the 200m Breast when, despite his form stroke misgivings he improved about half a second from his last swim, in March this year, to take an unexpected silver medal in 3:20.61 to finish the first session with 2 medals out of 2 races having closed 5 seconds on the winner in the last 50m.

Session 2 brought a 5th place in 1:22.83 which was perceived to be a poor time although missing a medal by less than 1/3 of a second and was, again, followed by a 1:08.18 in the 100m free just 0.2 seconds slower at the age of 57 than in 2016, evidence that hard work in training can ward off the slowing down normally coming with age.

However, he saved his best till the last session when his endurance kicked in and he firstly picked up gold in 2:56.93 for the 200m IM which was faster than he swam in January this year and completed his meet with gold in the 200m Free in his fastest time for 3 years of 2:24.87.

Meanwhile, Anderton who left for Millfield school this scholastic year went to the Somerset Development meet and came away with 3 personal bests from 4 swims which included a gold, a silver and 2 bronze medals.

Next weekend sees almost 40 members competing at 2 open meets, Harpenden SC’s Legacy meet at Borehamwood and Hemel Hempstead SC’s Birthday Open followed a week later by the first round of the national Arena League where the club are drawn at the pool in Enfield.