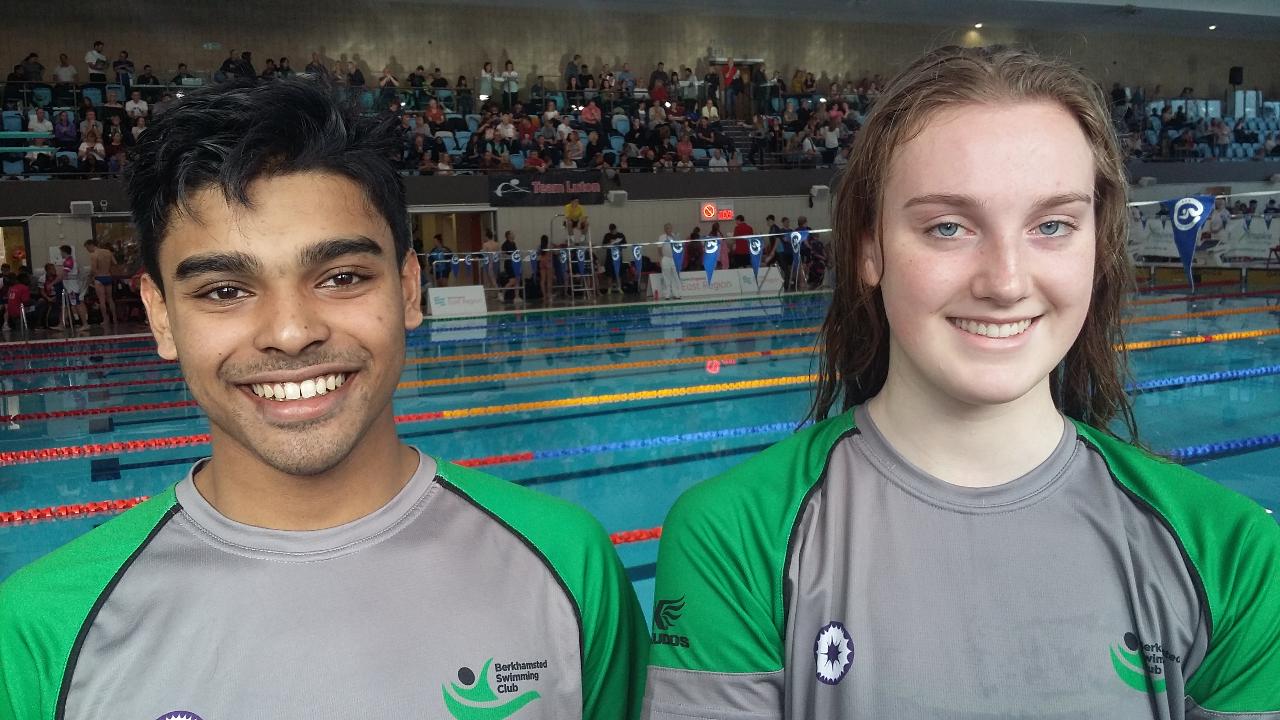 At Luton, Ellen Northwood, Issy Soulsby, Ish Rahim and Dan Chennells competed in individual events at the East region Winter Championships joined by George and Harry Thorne for the 3 male relays which the club entered for the first time.

Sadly, several other club members who qualified were unavailable due to illness and non-swimming related injury, reducing the club’s overall presence.

The meet began with Ish Rahim completing a pb in the 200m IM, lowering his best to in what was a County Consideration time for January for the 16-year-old.

Issy Soulsby blasted out a 32.67 for her 50m backstroke for her third fastest ever time and her first consideration time for the event at Counties next year.

Her Medley performances were strong all weekend and further evidence of this was in the 400m IM , the first event of the Saturday afternoon session when she was ahead of her 2 year old personal best throughout the whole race, eventually clocking a County Qualifying time of 5:26.19 and a new personal best, looking strong all the way.

Ellen Northwood joined the party for the 50m fly and kept up her consistent qualification for County Champs at the event and distance when she again posted her third fastest ever time with 31.35 as she returns to something like her old best.

Ish Rahim was pleased with all bar the finish of his 50m Fly where he glided in to be just a fraction off his best in 27.17 and then Issy Soulsby completed a heavy day with her 200m backstroke where, after a solid start she fell away in the final lengths but was still quick enough to post a Consideration time for Counties of 2:34.64.

The final race of the session was the 4 x 200m Free relay for men and Ish Rahim was joined by Dan Chennells, George Thorne and Harry Thorne. Ish Rahim led off with a pb of 2:05.38 followed by George, Harry and Dan as they set an inaugural 4 x 200m record for the club with 8:51.29.

The foursome then stayed together for the evening finals session where they competed in the 4 x 100m free and all 4 went faster than ever before. This time Dan Chennells led off in 57.91 followed by Harry & George, both fractionally outside 60 seconds, but closing in on the iconic sub 60 second swim, and Ish brought them home with a 56.59 for a final 3:55.04.

The Sunday began with Issy Soulsby paring 6/100ths from her 200 IM best in 2:35.41 for yet another CCT in her first year as an Open swimmer next year.

Ish cruised to a new best and CQT in the 50m backstroke with a rapid 29.12 but was slightly disappointed to only clock 1:01.17 for his 100m Fly although this did improve his County Qualifying time for next year. However, he followed it up with an improvement to 1:06.69 in his 100m IM (another CCT) in a busy afternoon.

Issy Soulsby set herself a sub 70 target for her 100m backstroke and looked on target throughout but stopped the clock on 1:10.00 exactly for yet another CCT.

Dan Chennells returned for his 100m free in the final individual event of the weekend and set the bar high for Ish Rahim to follow with an aggressive swim that saw him go faster by over a second to hit the pads in 56.45 and a heat win from start to finish. His time was faster than Ish’s existing best. The challenge was on and Ish Rahim responded with his own pb, also by more than a second in 55.61 to end the meet on a high note.

At this early stage in the season the swimmers showed what can be done when they are tapered and fresh for the big meets later in the season and should all be proud of what they achieved over the 2 days.