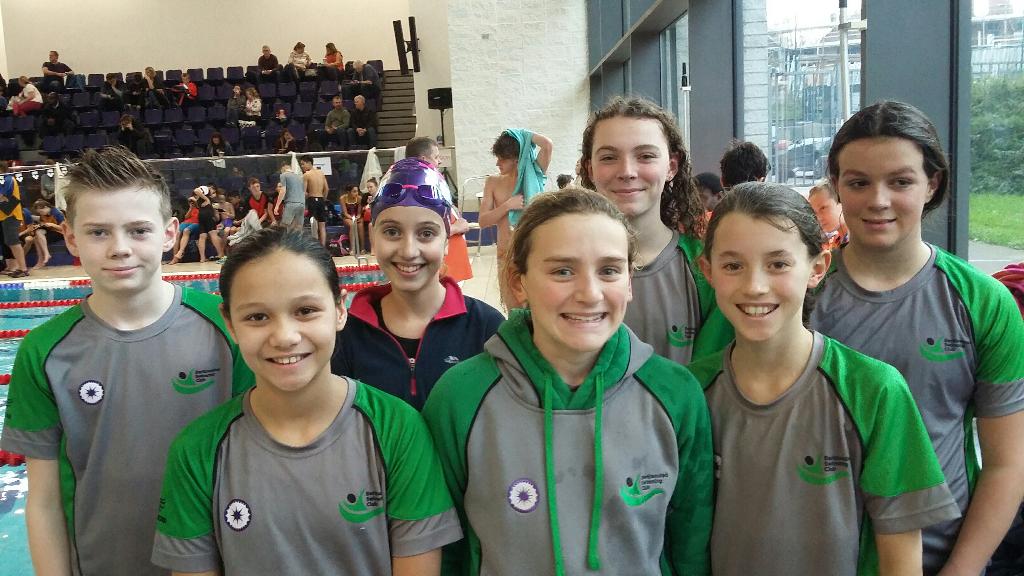 15 youngsters from Berkhamsted lined up at The venue Borehamwood over the last weekend for the 6th Hoddesdon County Qualifier meet and, as always, delivered some excellent results.

The meet began with Lara Connell, in her first ever Open Meet also swimming her first ever 400m Freestyle. She was far from overawed and evidence of how hard she attacked the race came in the form of personal bests at both 100 & 200m (1:27.68 & 3:04.30) as well as a first time best at the end of the race in 6:12.19 which brought a reward of a bronze medal.

Eva Lawson’s local dominance continued as she blitzed her 100m breast best time by nearly five and a half seconds to take gold in 1:36.05. This time gave her a complete set of County Qualifying times (CQT) in her first year at this level. Also, in the 100m Breast Issy Whitaker collected her second ever County Consideration time (CCT) just 2 weeks after her first one, posting 1:43.98 as she won her heat for 4th in the event and Connell, just minutes after her 400 Free posted 1:45.71 to smash her best by 12.76 seconds.

After Eric Batt had fallen foul of twitching at the start before the starting signal in his 100m Breast when he would have swum quicker than ever before in 1:44.87, Eva Lawson took her second gold in the 50m free (33.02), Issy Whitaker improved her best to 37.80 with Lara Connell touching in 38.15. Bella Hinch, in her first Open, took a merited second in her 50m free heat from slowest seeded lane 8 and a new pb of 34.81 and in the penultimate heat it was a head to head between Abbie Briers & Lydia Wisely. In a closely contested heat Briers just came out on top, taking the heat in 32.27 to Wisely’s 32.87.

Eric Batt managed a superb second length in the Boys’ 50 Free to come home 2nd in his heat in 36.60.

Back to the girls in the 100m Fly and this time it was a head to head between Abigail Briers and Eva Lawson. Both set pb times with Abigail Briers leading the whole race from the start, turning nearly 2 seconds ahead of her best at 50m and finishing in 1:24.31 to improve her CCT with Eva Lawson powering home 3rd in the heat, Gold in her age and yet another Club record for 10-year olds with 1:28.13, improving her CQT as well. Abigail Briers took the silver in the 12-year-old age while Lydia Wisely collected the bronze to complete Day 1.

The Sunday began with Alex Kalverboer returning to the fray in the 200m IM, picking up the Gold with a small pb of 2:51.45, improving his CCT. He took 4th in the 50m Breast, minutes later and Louis Armitage was just outside his best in taking the Open Gold medal.

Eva Lawson, showing no signs of tiredness pocketed the Gold in the 50m Back, lowering her best by an astonishing two and a quarter seconds and first timer Nell Coster posted a CCT of 45.75, improving almost a second. Lara Coster clocked a CCT of 38.14 and Bella Hinch dropped over 4 seconds to clock 41.48.

Alex Kalverboer came up next for the 100m Free and showed how far he has come by lowering his best by over 2 seconds to 1:08.82 for silver in age. Louis Armitage repeated the silver medal placing with 1:00.44.

Alex Kalverboer, despite looking tired after a heavy programme still had enough to claim bronze in the 200m Breast, 3:15.57 and then the girls took on the 200m IM. Lawson dropped in another Club Best of 2:53.61 for yet another Gold and Vicky Ayles took home silver in 2:56.20.

Alex Kalverboer then whipped out his final medals with silver in the 200m Free having recovered to slice more than 5 seconds from his best in 2:28.91 & bronze in the 50m Fly, 38.20.

In the 50m Breast Millie Harrison joined the party with bronze in 47.88 and Victoria Ayles improved her best time to 44.21.

To cap another fantastic meet, Lawson made a complete sweep of golds from her races as she set an improved CQT in the 200m Breast and 3:25.20 and Harrison took bronze in her age group, improving by 1.68 seconds to 3:35.56.

With just 2 more opportunities to qualify for County Champs in January / February 2019 at the Arena League final round on 8th December and the Hemel Hempstead run Alan Doyle Memorial Sprint meet on the 9th the swimmers are looking forward to a short period without competition up to Christmas.