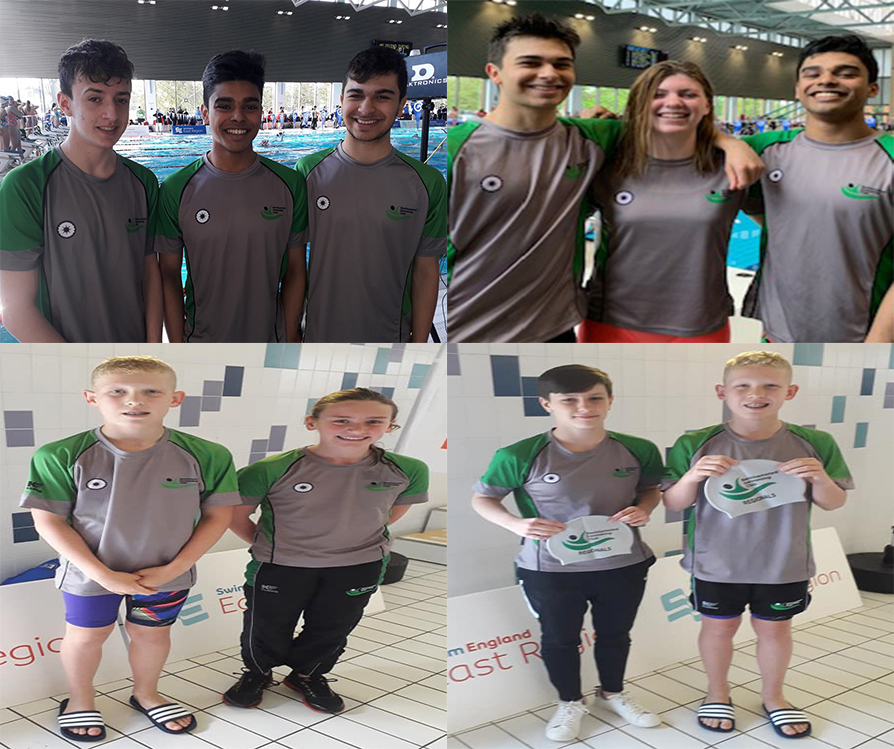 Over the two May Bank Holiday weekends 8 Berkhamsted athletes took on the top swimmers in the East Region at Luton and UEA Sports Park Norwich.

Zac Patel & Ish Rahim began the competition in the 100m Butterfly events and both were a little short of their best times with a brace of 65 seconds swims.

These had followed Dan Chennells in his first individual Regional swim clocking 31.12.

James Chennells took on the 100m free team after nearly 9 months of illness interrupted training and should be pleased with his 55.60 which, in itself was a club 17 year old best.

After the Youth meet, the Age Group athletes, Tamsin Moren, Alex Kalverboer & Eva Lawson travelled to Norwich for their Championships. The Saturday produced 4 personal best swims out of 4.

In his first ever Regional swim after missing out last year due to pre-booked holiday Alex Kalverboer smashed his 200m Breast pb by 6 seconds, clocking 3:09.47. A testimony to how hard he pushed throughout the race was that his 50m and 100m splits were both personal bests in their own tight and the finishing time was a Club, Long Course, 12-year-old record.

Tamsin Moren was back firing at her best and raced hard in her 100m breast leading at halfway in a 50m pb of 38.59. In the second half of the race she struggled late on and faded slightly but her 1:23.92 placed her 13th from a seeded position of 19 as she, hopefully realises what she could achieve.

In the afternoon, Alex Kalverboer was back in for the 100m Back swimming Long Course for the first time at the event. A steady start saw him 4th at the turn and he ploughed back on the second 50 to move into 3rd place in the heat. His 1:14.26 was a small improvement on his short course pb converted to a 50m pool time.

Eva Lawson was the final swimmer in the meet and her first swim came in the 100m Free. As an 11 year old in the double age group, 11/12, section she was seeded 26th and 2nd fastest 11 year old, out of the 33 entrants. After an unusually slow start she came through strongly to half way where she dropped her 50m best to 32.69 and led her heat. It was a lead she did not lose, touching the pads in 1:08.25 to take the heat comfortably and move to 13th overall and as the fastest 11 year old in the field. A terrific start to the 3 days.

Alex Kalverboer saved possibly his best swim for his final event, the 200m backstroke. Seeded 16th and in the unfavoured outside lane 1 in his heat, he took off from the start and was never headed. Turning at 100m only fractionally slower than his 100m event the day before he continued to pile on the pressure moving inexorably away from his field until about 175m when they started to reel him back in. But his excellent pacing with his last three 50m segments all at 40 seconds had seen him far enough ahead that he held on to win his heat and finish in 10th overall just 0.13 seconds away from a place in the final.

The Age Group meet ended with Eva Lawson taking on both the 50m Back and 200m Free events and, once again, performing with distinction. In the 50m Back she reduced her best time to 36.17 to finish 20th in the dual age group again. However, like Alex Kalverboer she saved probably her best swim till last. 6th fastest qualifier for her heat she was aggressive from the off and made the rest chase her leading the heat from the 25m point, turning first at every turn and with every split being almost the same as her short course (25m pool) pb. Her final time of 2:27.50 coverts to a 2 second short course pb and set a new club record by some 6 seconds to finish a magnificent series for all the first time age groupers at this level.