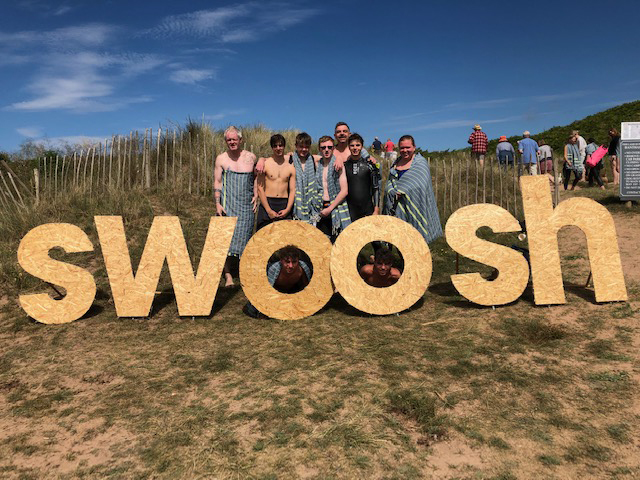 On Saturday the 6th July 2019 a group of 9 masters and junior swimmers from Berkhamsted and Watford swimming club took part in the Bantham Swoosh in Devon. This world class 6km swim is an exciting, invigorating swim in clear water and a shallow sandy-bottomed estuary and included 747 swimmers in total.

The swimmers set off at 7am inspired by Coach Jeremy Irvine and Matt Culverwell , masters swimmer - both experts in their field. Supporters made their way to Bantham Beach where the swim was to finish.

The Outdoor Swim Society volunteers seemed well organised but slightly taken aback at the speed of the first pod of swimmers who were initially led by Matt Culverwell. During the swim the youngsters reported to draft off Matt and then when they felt more comfortable or discovered the finish line , in true competitive form, they raced off.

Harrison Bullock swam out of his socks to beat Matt Culverwell who was the first skin swimmer back ( his time was 105.20 ) Harrison’s time of 105.02 ensured he was the 7th swimmer and 5th male.

The next from our small team to climb out at the beach was Callum Bullock in a time of 108.20 making him the 10th male overall and 13th swimmer overall a back to Bantham.

Twin Pedro Irvine arrived in a time of 109.13 and was promptly followed by the only girl of our group Isabel Sansom with a pb of 9 mins from last year - she finished in a time of 113.18 - she was the first u18 female back and 8th woman overall.

Jeremy Irvine swam up the beach in a time of 114.55 making him the 8th skin swimmer back to Bantham.

In essence this group of swimmers dominated the event ensuring a true race - in 2018 the fastest time recorded of all the swimmers was 113.50 and all but one of the team beat that time !