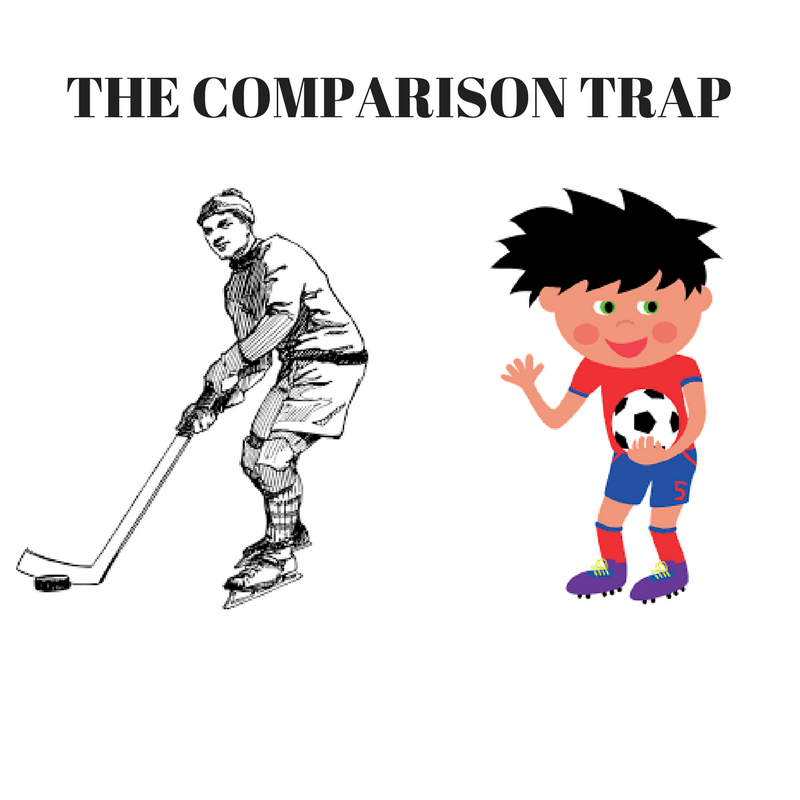 As more and more children battle to be the best at younger and younger ages, what is the damage to those children around them, who spend large amounts of time comparing themselves to their higher performing peers in terms of their own long term development and potential future participation?  Potentially it is huge and we must do all that we can as parents and educators to avoid the children we are involved with getting sucked into ‘The Comparison Trap’.

We know that there are many discrepancies during these early sporting experiences.  Some children are well ahead of the game due to the amount of time they may have spent practising a specific sport or they may be physically and emotionally more developed for their age.

If your child compares themselves to some of these early developed athletes they run the risk of dropping out of the sport too early and as parents we need to do all that we can to help manage the situation.  We can be all too quick to label our children potentially in a way that may hold them back, comparing themselves to us or other players, or giving them specific positions or even defining them on their sporting prowess in a particular sport.

We run the risk of labelling our child musical or sporty without giving them the chance to properly develop in a particular field.  The reason for this is that a lot of time may need to be committed to improve a particular skill and we take the starting point sometimes as a sign of what they may be capable of.  It is far easier for parents to motivate and invest time for their children in something where there is already some perceived success as opposed to developing areas of weakness.

Children need to know that they all develop at different rates and at different times and as parents we need to understand that sporting development is never the lovely line that we see in the first diagram below, but more like the second one.

Children will have periods where they plateau, where they grow quickly, where they improve rapidly, where they get worse and this is all part of the sporting process.  The latter one is a difficult one for parents to watch and see but it is a reality.

One thing is clear, current or early sporting performance is not a good indicator of future sporting success.

Think back to your own childhood, people you may have seen or played with who were so far ahead of the game at a young age but then never featured as they hit the teenage years or moved into adulthood.  Many international junior sportsman in a number of different sports struggle to make the jump from junior to senior athlete.

There are so many stories of athletes who were average at a younger age, who never really featured prominently who went on to become far better sportsmen and women than many of their earlier high performing peers.

As parents, understanding this is crucial if we wish to manage the situation successfully. Many children will soon lose the motivation of turning up to training and matches each week if they are regularly comparing themselves to others and see their team mates or opposition as ‘miles better than them.’

This can be even more testing for parents and athletes as many selection and talent programs select the physically dominant performer, the one who is competing well in the here and now and not the one who may develop much further down the line.

However, as parents we need to understand how and why this may happen and communicate it effectively with our children, letting them know the following in whichever type of language we choose to use:

We have to accept as parents that there will always be someone better.  However, our children need to understand more that they must not compare themselves to others!  They can enjoy playing with these players, competing against them and indeed even learning from them but they must never feel a failure or threaten to walk away from a sport just because they are not as good as someone else.  Not at least until they have given themselves plenty of time to develop.

They will never know what they are truly capable of until they have truly invested the time and effort.

So the next time your feel that your children maybe falling into ‘The Comparison Trap’, be armed and ready to explain to them why comparisons may not be such a good idea! Ensure they know that sport and development is a long term investment and success is not necessarily in the here and now.