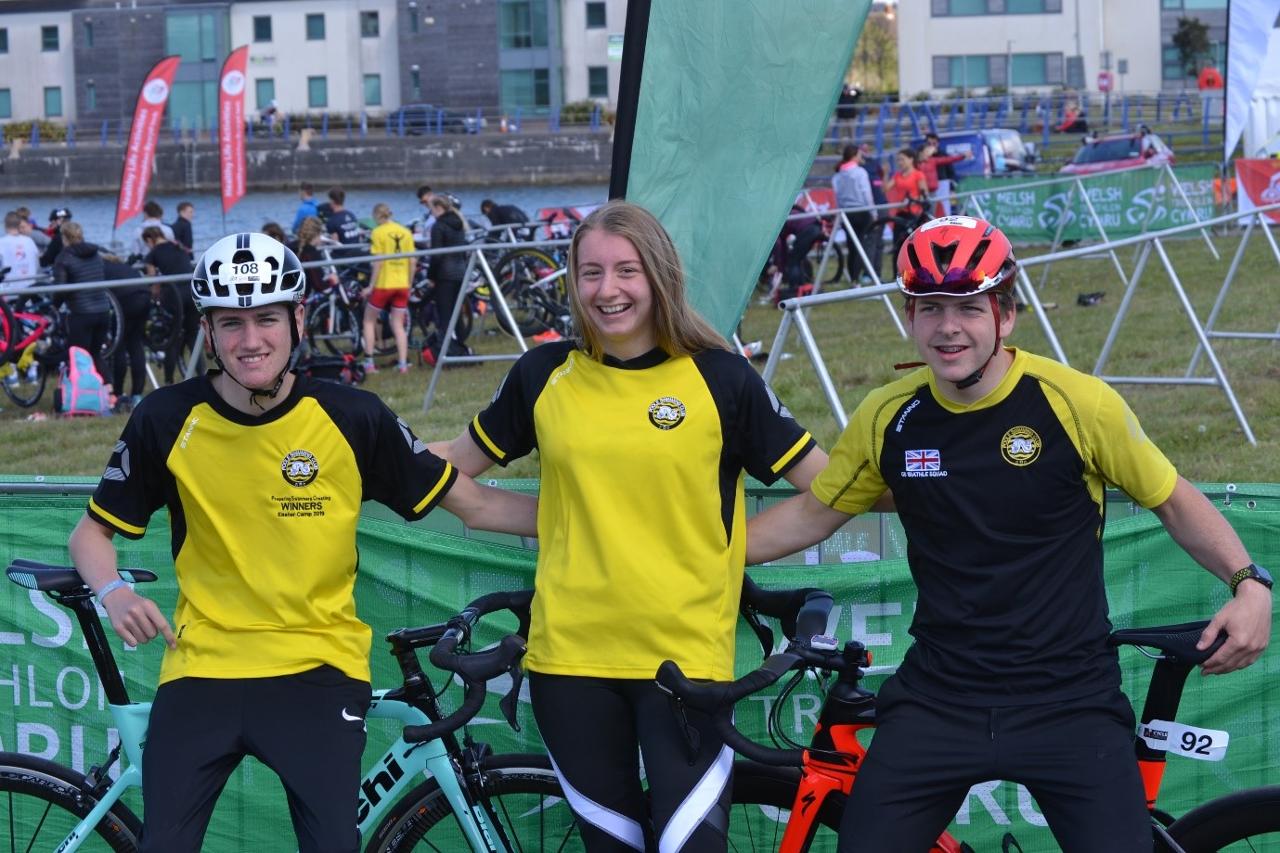 The GB Triathlon Super Series is a series of 7 Triathlon races held across the UK. Back in March a selection and ranking race was held in Loughborough with over 450 of the countries best Youth and Junior Triathletes competing for around 60 spots (per age group male and Female Youth 15/16 yrs and Juniors 17-19 years) in the main race series.

3 club athletes competed in the assessments race with Alex 42nd, Liam 13th and Ryan 5th. This ensured that they all got starts for the 2nd series race held in Llanelli Wales on 11th May.

There were early fears that the water and ambient temperatures may not be high enough to permit an open water swim, as ITU rules were in place and quite stringent around temperatures, but as the day started with sunshine it was announced that the race would go ahead with a 510m Open Water (sea inlet) swim. With between 55-70 starters in each wave a fast run in beach starts would be essential to avoid the mass bun fight to the first buoy.

In the Youth boys race Liam and Ryan fought their way to the front of the pack with Ryan taking and early lead from the first turn buoy, then exiting the water still in first in 6.11 with Liam not far behind in 7th in a time of 6.31.

Into transition for wetsuit removal and onto the bike, Ryan broke away with a small bike pack of 7 which stayed intact for most of the race and after 10k on the bike leg, into transition to rack the bike and start the run leg of 2.5k. Liam entered transition in a larger bike pack and set off on the run leg.

Ryan made up 2 places on the run leg finishing 5th overall, but as the race included 19 Junior athletes from the age group above, when these are separated out, he finished 1st in the youth category.  A huge well done!

As a result of finishing first in his Region as well as the Youth race, Ryan has qualified for the School games (Triathlon) in August, he awaits the selection process to see whether he has done enough to qualify for a GB slot at the International Super League races held at Malta and Jersey in October.

Liam finished 21st in the full race but again once the juniors are removed from the results, he achieved a creditable 11th place which is an improvement of his first race and shows his future potential.

Next to the girl’s race, again featuring Female youth and Junior ladies combined, Alex who is playing catch up in training due to her relatively late start to the season, was looking to improve on her 42nd place from the first race. She got off to a great start in the swim coming out of the water in 3rd in a time of 6.40. Onto the bike where she has improved markedly in the past 6 weeks but considering she in in the lower part of the age group battled well to come into transition in front of all of her Regional rivals and placed 31st overall on the bike leg. Onto the run which was solid, and saw her finish 22nd overall but 17th in the Youth category which is a 25-place improvement on her first race at Loughborough. (Alex in Green on the Bike Leg) 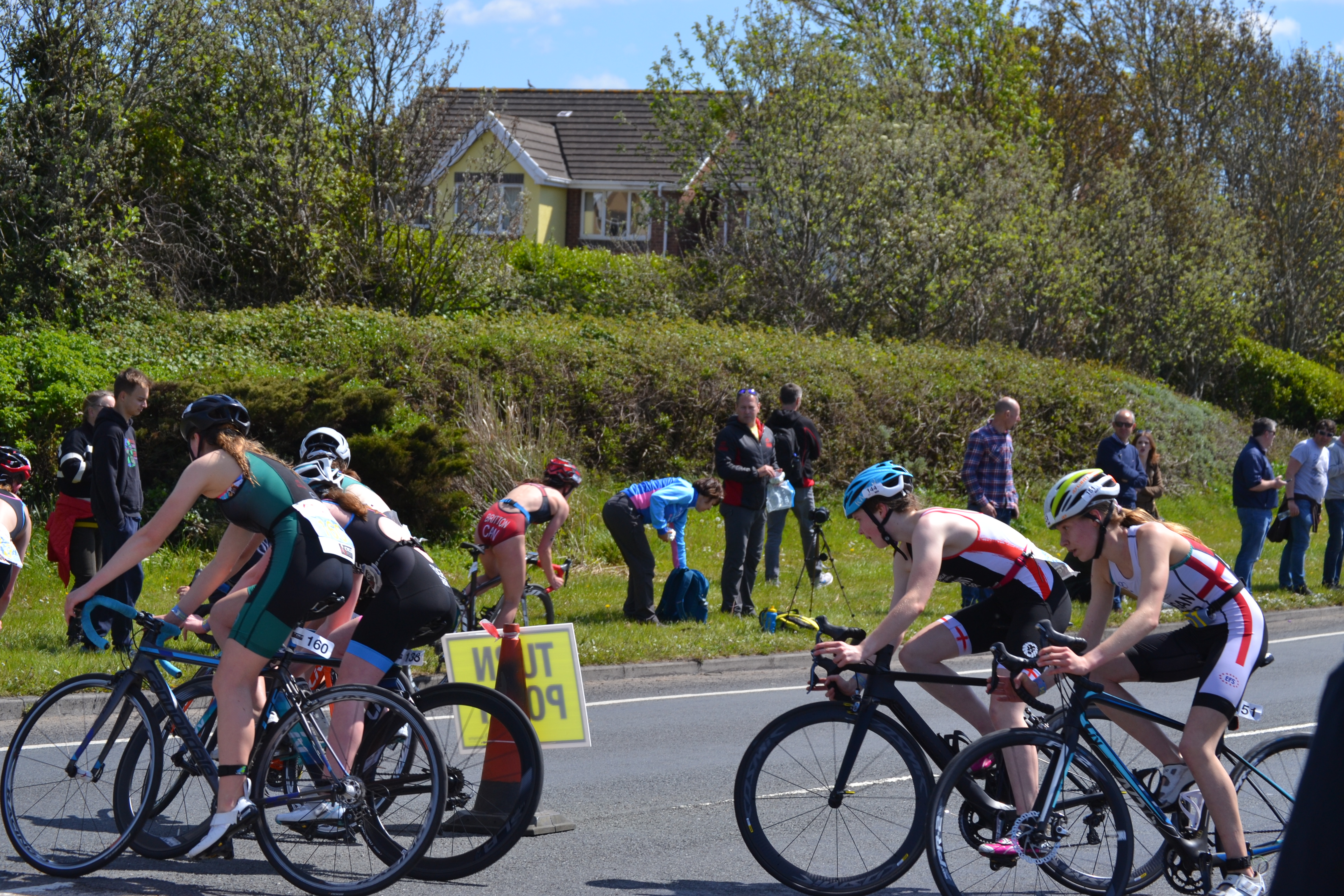 In the last race of the day, Henry Bramwell Reeks who was racing in the combined Senior, under 23 and Junior men, all at elite level, and tough racing with an 800 swim, 20k bike leg and 5k run. E ven gaining entry into this race is a huge achievement, and Henry finished a respectable 40th.  A promosing position in a fast field to build upon.  (Apologies go to Henry for not getting him into the team photo, or being able to give race detail due to the late start of his race)

Next up the 3rd race in the series at Blenheim palace in 3 weeks time.