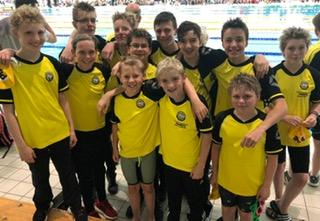 As the sun shone on a lovely spring morning PSC’s Regional qualifiers made their way up to Bristol for the start of another busy weekend of racing. Preparations for Weekend 2 had all gone well and so our swimmers and coaches were primed and ready to go.

The first event of the morning was the Girls 200m Individual Medley. Lilly (11/12 years), Tilly and Betsy (13 years) swam PB’s and Betsy’s time was good enough to see her make her first final later on in the session.

The Boys 200m Freestyle, produced more PB’s from Dan, Jack, Arron, Luca and William (11/12 years). Luca’s swim earned him a place in the final with the 4th fastest time. In the 13 years Age Group Zack and Charlie M swam PB’s and Max put in a well-paced swim which put him into the final with the second fastest time. Our 14 year old Boys also put in some impressive times with Fin swimming a PB and Ryan making the final having gone out like a rocket.

In the Girls 100m Breaststroke Lilly swam another PB with Tilly and Betsy just outside the times they set only a month ago. Regrettably, Holly was unable to compete in her Breaststroke events having fractured a bone in her ankle a few days earlier. We look forward to seeing Holly back in the water soon though.

Our most successful event of the morning was the Boys 50m Butterfly which produced some big PB’s from Luca, Arron and Freddie (11/12 years), Charlie M and Max (13 years) and Fin, Ryan, Charlie R, Ethan and Alex (14 years). Charlie M’s time made him equal 10th which put him in a “swim off” for the final where he swam 0.4 seconds faster but narrowly missed out on a final place. Boys making it through to the finals across all three age categories were Luca: ranked 1st (11/12 years), Max: ranked 2nd (13 years) and Alex: ranked 4th (14 years)….. So, lots to look forward to later on in the finals…..

The final event of the session was the Girls 400m Freestyle with Abigail (11/12 years) and Betsy (13years) swimming PB’s and Molly (14years) swimming well too.

Luca’s first final of the morning was the 11/12 years 200m Freestyle. Luca was well aware that he had the 50m Butterfly event coming up and so he swam a relaxed final which gained him 10th place.

Max was up next in the 13 years category where, once again, he paced his race really well to come 3rd and win our first medal of the day. Ryan followed on in the 14 years final against some big and strong boys and he held on to his ranking of 7th place with a much better paced swim.

Our only girl’s finalist saw Betsy step up by 1 second with a really determined swim to take 7th place having gone into the final in an outside lane being ranked 9th.

The finals of the Boys 50m Butterfly brought more success. In the 11/12 years age group, Luca led from the start to win Gold by a huge margin of 1.5 seconds. In winning this event Luca also set a New 12 years Club Record as he dipped under 30 seconds for the first time. The 13 year old Boys race was incredibly close with only 1 second separating the top 8 boys. Happily, Max was able to step up on his heat time and took the Silver medal with another Personal Best time. The 14 year Boys race was just as exciting with Alex narrowly missing out on a medal by only 0.07 seconds. Alex swam a great race though and he is on track to make British Nationals in July with such a convincing swim.

More success came in the afternoon session in the 1500m Freestyle event. Our medallists in this event were: Miles, Arron, Aimie and Teagan (Silver medallists) and Thea (Bronze medallist). PB’s in this session came from Arron, Miles and Ryan. Ryan was placed 4th swimming a really well paced race.

With the sun still shining on Sunday morning we looked forward to another successful day and our swimmers didn’t disappoint…. So, here we go….

Session 3 kicked off with the demanding Girls 200m Butterfly event. Both Lilly (11/12 years) and Tilly (13 years) swam PB’s and also made it through to the finals.

The next event, the Boys 50m Backstroke, produced more PB’s from Luca who earned himself a place in the final with the 3rd fastest time. In the 13 years age group Zack and Charlie M swam PB’s and Max put in a well-paced best ever swim to put him into the final with the 5th  fastest time. Our 14 year old Boys also put in some impressive times with Fin, Charlie R, Ollie and Ryan all swimming PB’s but just missing out on a place in the final.

In the Girls 100m Freestyle Abigail (11/12 years) and Sheila (14 years) swam PB’s with Molly and Lilia just outside the Season Best times they set just a month ago.

For the second day in a row, our most successful event of the morning was the Boys 50m event where the 50m Breaststroke produced some super PB’s from Luca, Freddie and Jack (11/12 years) and Alex, Ryan and Joe (14 years). Boys making it through to the finals were Luca: ranked 1st (11/12 years), Freddie: ranked 2nd (11/12 years) and Alex: ranked 4th (14 years)….. So, once again, there was much for the coaching team to look forward to in the finals

The 200m Butterfly is a tough event to swim at the best of times and congratulations go to both Lilly and Tilly for swimming long course heats and finals in this event. Lilly improved on her heat time and gained a respectable 8th place in the 11/12 years Age group and Tilly was placed 5th in the 13 years category. Well done girls – you did us proud.

Next up came Luca in the 11/12 years Backstroke. Although backstroke isn’t Luca’s favourite stroke, he impressed his coach by stepping up on his heat time and winning a Bronze medal in the process. In the 13 years Backstroke final Max swam just outside his PB to take 7th place.

The event we looked forward to was the “head to head” between Luca and Freddie in the final of the 11/12 years 50m Breaststroke. Boys, you didn’t disappoint us and you both put in a fantastic race with Luca setting another 12 years Club Record to take the Silver medal and Freddie taking the Bronze medal and swimming another PB in the process. Watching the younger boys in this event must have inspired Alex as he swam equally well in the last final of the session taking 8th place.

Three of our boys swam the 200m Butterfly and it was impressive to see all three of them swimming PB’s. Great work and well done to Luca, Arron and Ryan.

The Girls 50m Breaststroke was a quieter event with only Lilly swimming a PB. That said, our boys made up for this in an exceptionally busy 100m Backstroke event. PB’s came from: Luca, Jamie and Jack (11/12 years); Max, Charlie M. and Zack (13 years) and Fin (14 years). Fin’s time was good enough to make the final. In the Girls 100m Backstroke PB’s were achieved by Abigail, Jess and Lucy achieved PB’s in the 11/12 year Age group and Betsy had another good swim in the 13 year Age group.

In the final event which was the 40m Freestyle, PB’s were swum by Freddie, Zack, Charlie M. and Max with Xavi swimming a nicely paced race. Arron finished off a great weekend to come 9th in the 11/12 years. Max (13 years) swam a 20 second PB to earn himself another Silver medal and Ryan swam another great race and was just edged out into 4th place in the 14 years.

And so to the Sunday finals……

Our only representative in the Boys 200m Butterfly finals was Ryan. All credit is due to Ryan as he gained a very respectable 9th place as he dug deep to race this event having only just swum his 400m Freestyle.

So, that was it. We’d seen a fantastic weekend of racing and there were so many positives to take away from this meet. In closing, there is much to look forward to at Millfiled next weekend the future looks bright at PSC.

A final thank you must go to our poolside team: Coach Jan; Coach Chris; Coach Phil and Team Manager Lisa and thank you too to our loyal parents and supporters.