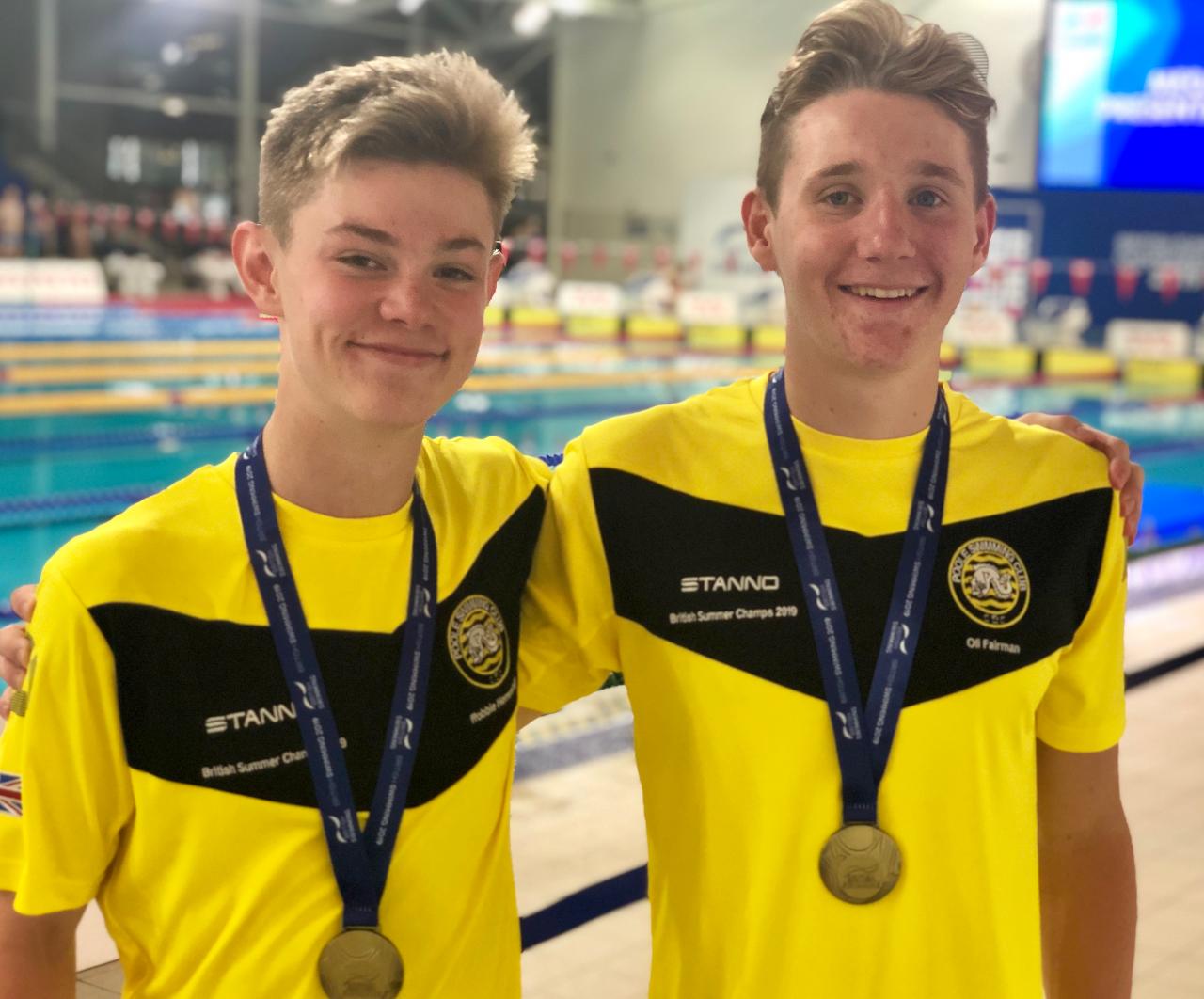 With added inspiration from team mates bagging a medal haul at the London Nuel Meet, the British Summer Championship athletes were down at the pool preparing at various times for their morning heat swims.  The energy and banter was high and warms up carried out effectively.

The trio of boys were up first in the 200m Back with Alex B and Robbie H pitched lane by lane next to each other. Robbie headed out on a 29.9 and Alex a second behind aiming to pace the race well. The boys gained similar splits on the second 50m and then Robbie upped his stroke rate to gain a lead over the heat down the 3rd 50m.  Both boys bought it home with a similar split. Robbie earned a PB of 1.5 seconds and heaed in to the final as first seed in 02.08.53.  Alex was smack bang on his PB moving up 9 places in the rankings to finish 14th in 2.10.59. Oli swam a gentle first 75m and upped the rate throughout the rest of the race to hit close to an even split and place himself as 3rd seed into the final in 2.04.42.

Catherine and Ella were pitched in the same heat in the 100m Fly. Both girls hit great starts and were mid pack by the first 25m, Catherine kept a high stroke rate and touched in 2nd place at the half way mark in 29.91.  Ella although swimming with a fast rate turned in 31.42 in 8th place.  By the end of the 3rd 25m Catherine was in 3rd and Ella 5th, with a final surge to the wall the girls finished just shy of their personal bests but fast heat swims.  Catherine in 1.05.20 (15th rank) and Ella 1.05.93. (19th rank).  Both girls will compete next week in Sheffield, but looking further ahead to next season they will form a determined positive training partnership pushing each other to even more successes. 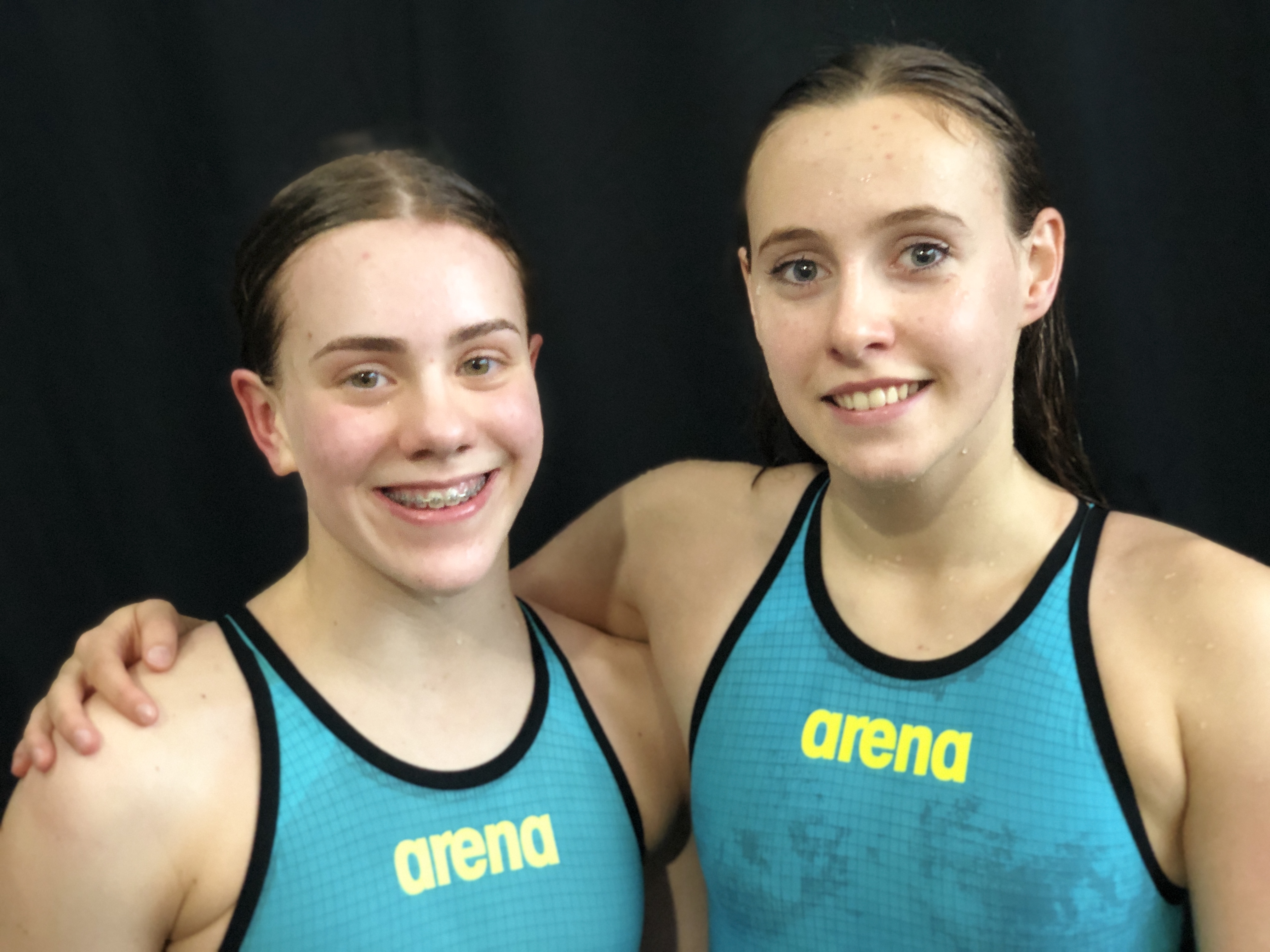 Shortly after the girls fly event, it was time for the boys with Alex C, Robbie and Alex B in the 50m.  Alex C went in super fired up and went down the length holding his plan hitting a great PB, the only problem is an involuntary twitch on the block was picked up and he was disqualified.  He was devastated, but these things happen for a reason and will only make Alex hungrier to return next season.  Robbie put a in a decent swim booking his final spot in 9th position.  Alex had a great start and was ahead of pb pace at 25m and at 35m then an extra unplanned breath was needed which cost a fraction of time, but placed for a good finish placed 2nd in the heat, just 10th of a second outside his personal best finishing in 15th place, overall.

Very shortly after the fly events, the final relays teams headed to the block with Teagan leading out the Girls 4 x 100m Medley team.  What a swim, Teagan smashed her PB by a second and placed first leading into Izzy who went out with a determined rate which she held on to and split in a 1.16.0 also a second under her PB pace.  Fiona dived in for the fly leg and looked strong down the first 50m, and feeling it a little on the second length handed over to Thea who blasted out in a 28.3 and returned in 30.8 to break the minute mark on the freestyle. The time was just shy of their entry time and placed the team 20th. 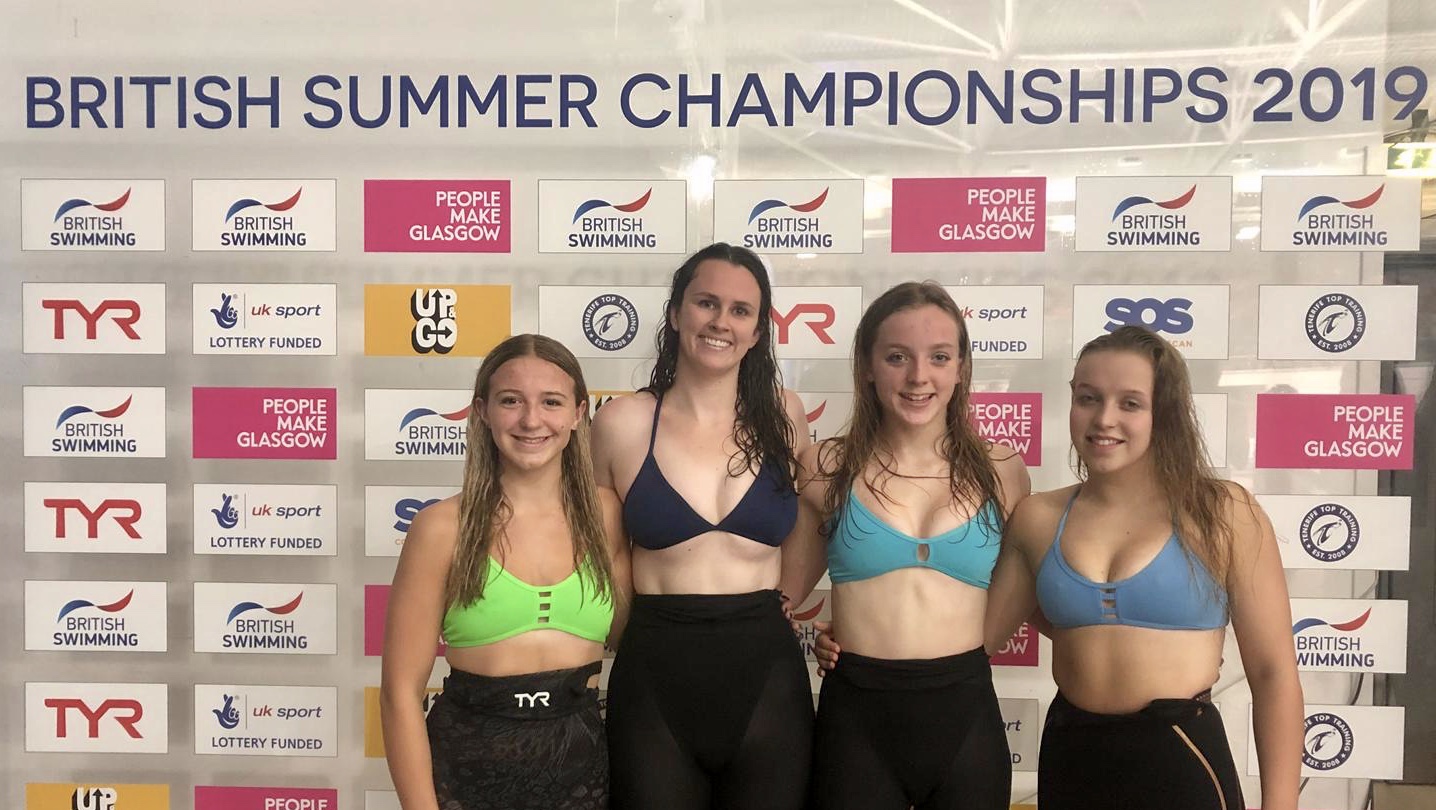 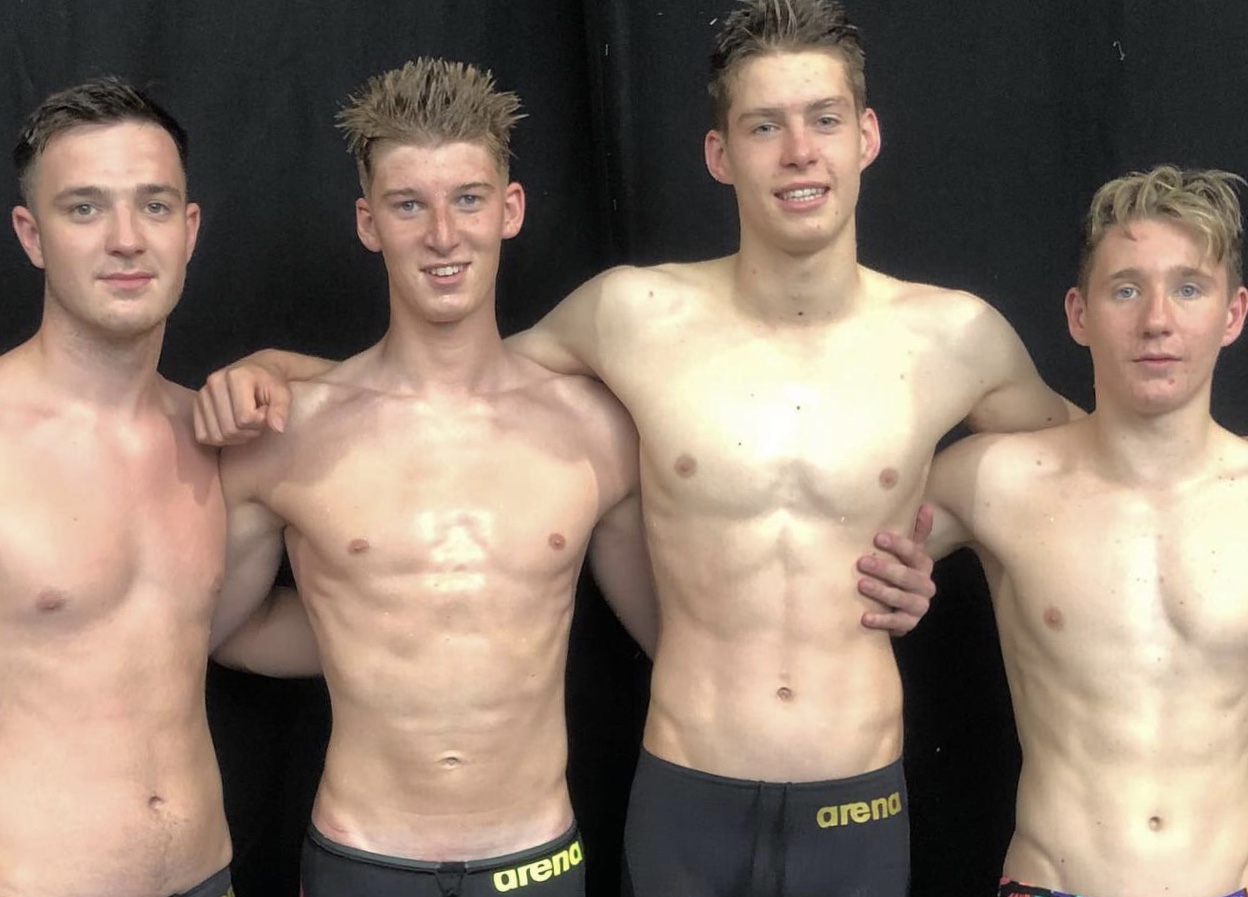 Following an extended swim down, and following their afternoon routine of nap, visualize, plan, Robbie and Ollie headed back down to the pool to compete in the 200m Back stroke.  The event both boys had been looking forward to all week.  Robbie would have to be quick out the of the pool to prepare for the 50m fly too. 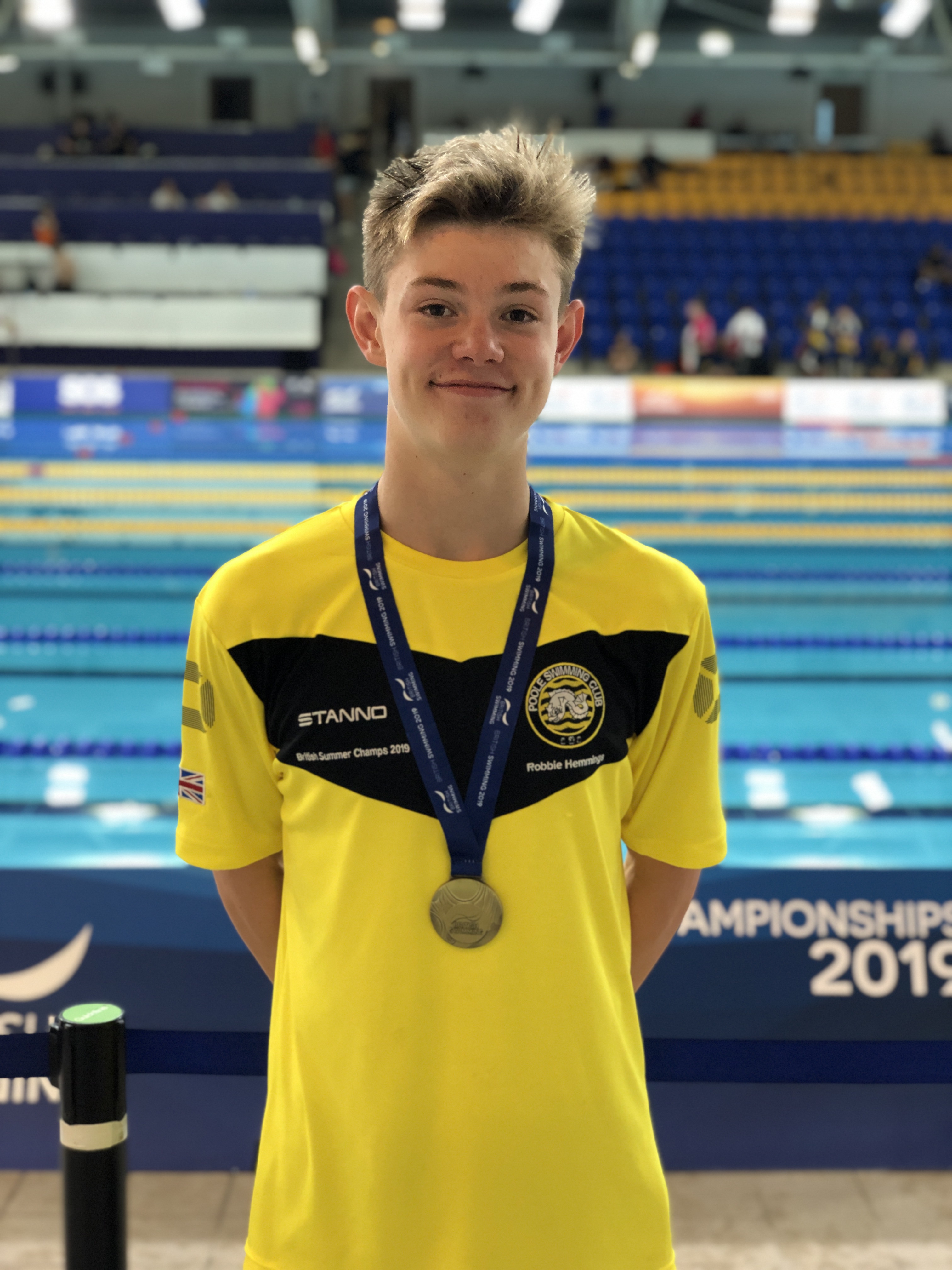 Robbie jumped in the pool and set of in the lead from his underwater work, turning 0.5 up on the morning heat swim, he picked up the rate and by the half way point was controlling the lead and turned in 61.6, the competition started to close slightly on the third 50m, but with a second lead over the field, he just had to hold on, down the last length, in which he took the win by 0.5 secs, in another personal best of 2.06.16.   A quick exit of the pool and into the swim down pool, Robbie was made to skip throughout his time waiting from the medal ceremony in order to prepare for the 50m fly.

Oli jumped into the pool for his 200m.  He set off with a quick stroke rate on the first 25m, before settling on to pace turning at the first turn in 6th place.  By halfway he was still in 6th place but was preparing to come back strong on the third 50m and although 1.5 seconds off the front three he had turned in fourth place at the 3/4 point.  Then came the Oli surge down the last length, it wasn’t enough to catch the first two, but he earned himself the bronze medal on the last arm and a Personal Best of 2.03.00, another Senior Club Record. 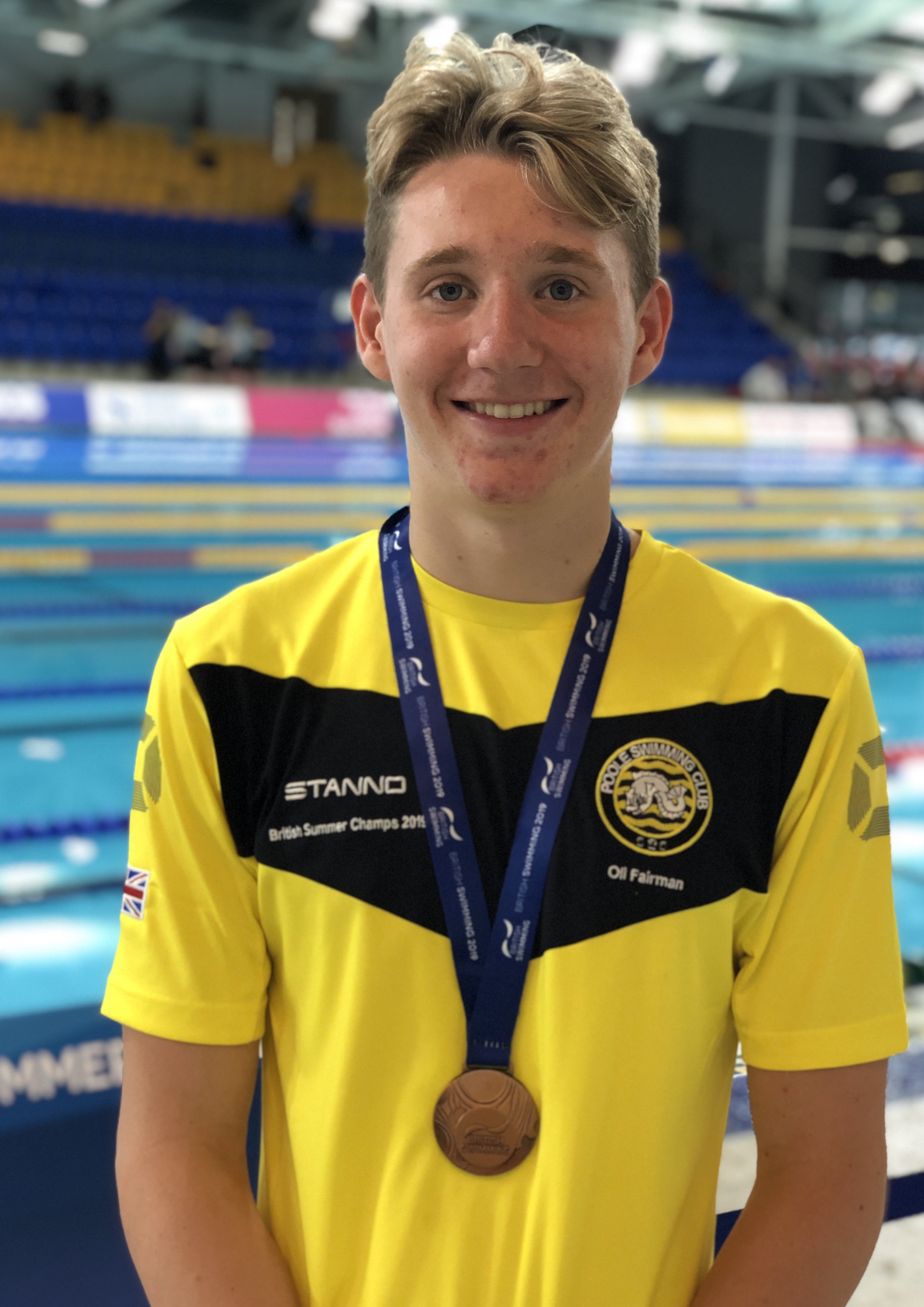 After collecting his medal Robbie was back in action with an improved race plan from the heats for the 50m Fly, in which he powered down the length and improved his ranking from 9th in to the final to touching in 5th place, equaling his personal best. 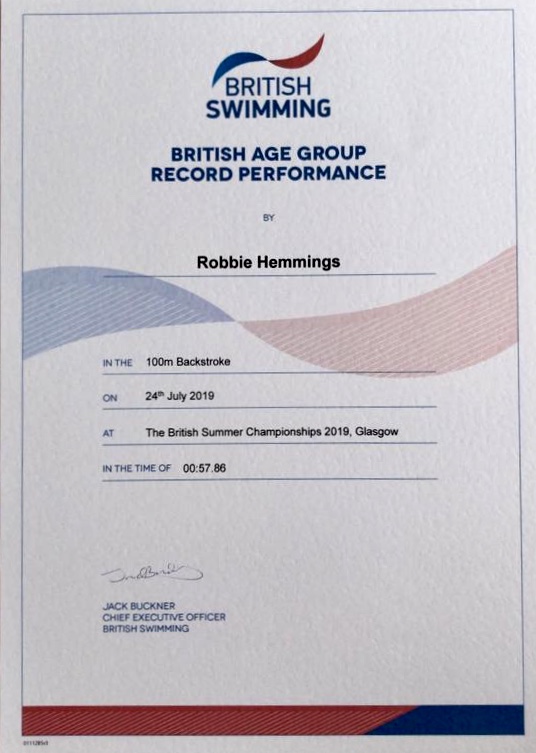 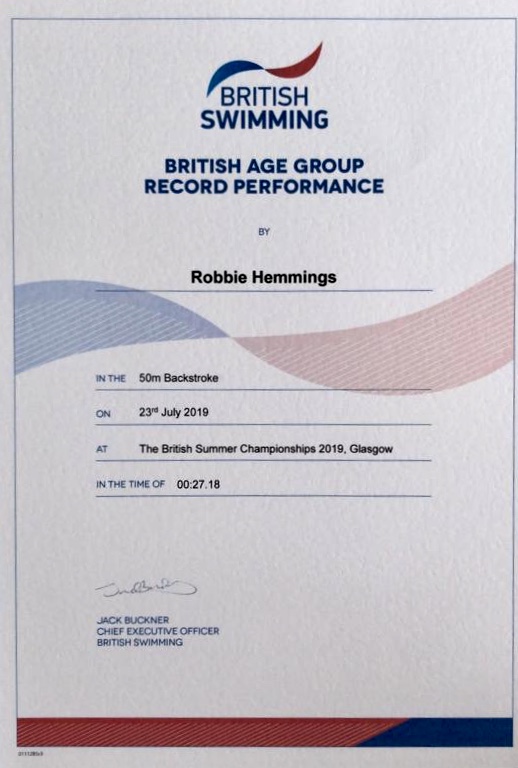 A huge thank you for all of the support of the parents for which the athletes should be brilliantly grateful for the effort endured to ensure these opportunities.   Glasgow from Poole certainly wasn’t the easiest of places to get to and the journey’s and nurturing the parents give is second to none.

A huge well done to all of the athletes too, for some this was their first time, for others their 14th, to step on that big stage, stand up and perform is remarkable, and not matter how you are feeling at the end of the week everyone that attended made the top 20 in Britain.  An excellent achievement that with determination, commitment and passion next season will be improved.

Finally, a well done to club members Emily Clarke who trains with Loughbough Univeristy and coach Andi Manly, on winning four golds in the 400m, 800m and 1500m individual swims and being part of fthe 4 x 200m Free winning relay team, and to Kath Baker swimming with Brimingham Univeristy and coach Gary Humpage who stepped up brilliantly in the 1500m to finished 11th.

With two days break from competing swimmers now head to the Swim England Nationals in Sheffield on Wednesday and we wish Jacob Peters the best of luck at the US Nationals kicking off on Wednesday too.