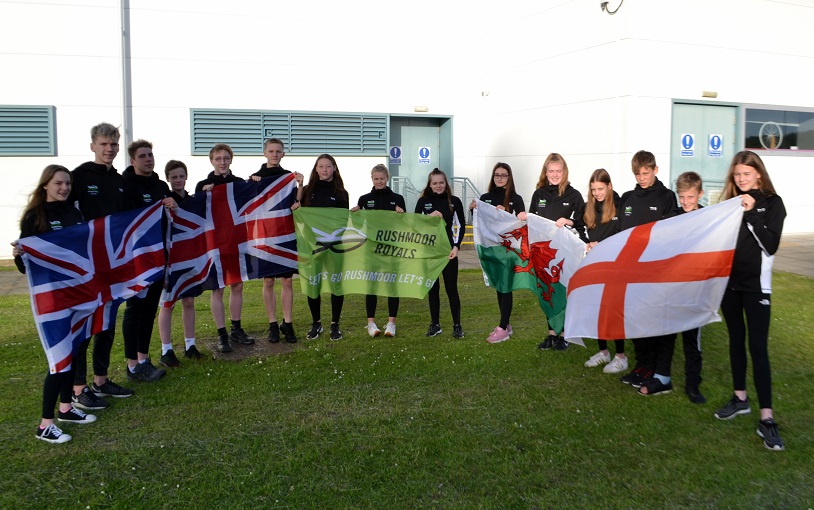 Swimmers from Rushmoor Royals have been finishing off their season with the National Championships where the club has had double the number of swimmers compared to 2018.

The British Swimming Summer Championships were held in Glasgow and is the pinnacle of the swimming year qualification is by invite only and based on national rankings.  The top 24 in each age group and event are invited to compete.  Charlie H reached the final of the 200m backstroke where he was placed 7th and in doing so broke the junior club record for the event.  Ella H placed 15th in the 100m breaststroke and the 4x200m freestyle relay team of Charlie P, Aidan G, Matt S and Andrew H improved their entry ranking to finish 24th.

This was followed by the Swim Wales Summer Open Meet that took place in Swansea where Alex H, Hannah R and Effie C represented the club with swims across a number of strokes and distances.  Effie reached the final of the 100m butterfly placing 8th and Alex finished 6th in the final of the 50m backstroke.

The Swim England National Summer Meet was held in Sheffield where ten Royals swimmers stepped up with some impressive performances which for many of them was their first national competition (Rosie R, Jess C, Zack K, Ella H, Zack W, Andrew H, Charlie H, Matt S, Liv P, Tash H).  Andrew H placed 7th in the 800m freestyle and Zack W also qualified for the final of the 200m breaststroke (9th). Jess put it on the line to reach the final of both the 50m (7th) and 100m butterfly (9th) where she also set a new club record time for both events.  Ella also reached the final of the 50m breaststroke (6th) but went even better in the longer 200m distance to place third and win her first National medal.  Charlie H reached the final of the 50m backstroke (8th) and 200m individual medley (8th) where he also set a new club junior record and then rounded off his championships with an impressive silver medal in the 100m backstroke.

After only qualifying for the English National Championships as a reserve and having only raced the 1500m freestyle event three times previously Tash dropped an impressive 23 seconds from her personal best to win the gold medal and become the English National Champion.  Finally, this was a first national championships for Rosie who took it all in her stride with some incredible performances where in her first event of the meet, the 100m backstroke, she not only qualified fastest for the final but then held on to that placing to take the gold medal as English National Champion.  Not content with one medal Rosie then made the finals in both the longer (200m) and shorter (50m) distances of the same stroke and placed second in both events to take a second and third national medals home in her kit bag.