The Swim England Nationals started after a brief respite from the British Summer Champs.  The Nationals were held in the more familiar City of Sheffield and the pool and atmosphere were set for an exciting week.

Coach Jan met with Catherine, Robbie and Aimie to make use of the training day hosted before the competition kicked off, where Aimie Q would kick off the races for Poole in the 400IM

Aimie was the sole Poole competitor to race on Day 1, whilst the other athletes met to train.

With two coaches to one swimmer, Aimie physically prepared well and headed down for the race, perhaps a little tense mentally, soaking in her first nationals experience.  With a great effort shown throughout the race she finished outside of her personal best in 14th position overall. Quickly reflecting, Aimie recognized a couple of areas that could be improved in preparation for her 1500m later in the week.

Izzy H and Holly H were up first in the 200m Breast-stroke. This was Holly’s first Nationals and she set out with a strong 1st 100m, perhaps with more effort employed than needed to be, which effected the second half. The time was outside her personal best, but the experience and opportunity will ensure a hunger to return next year finishing 17th overall. 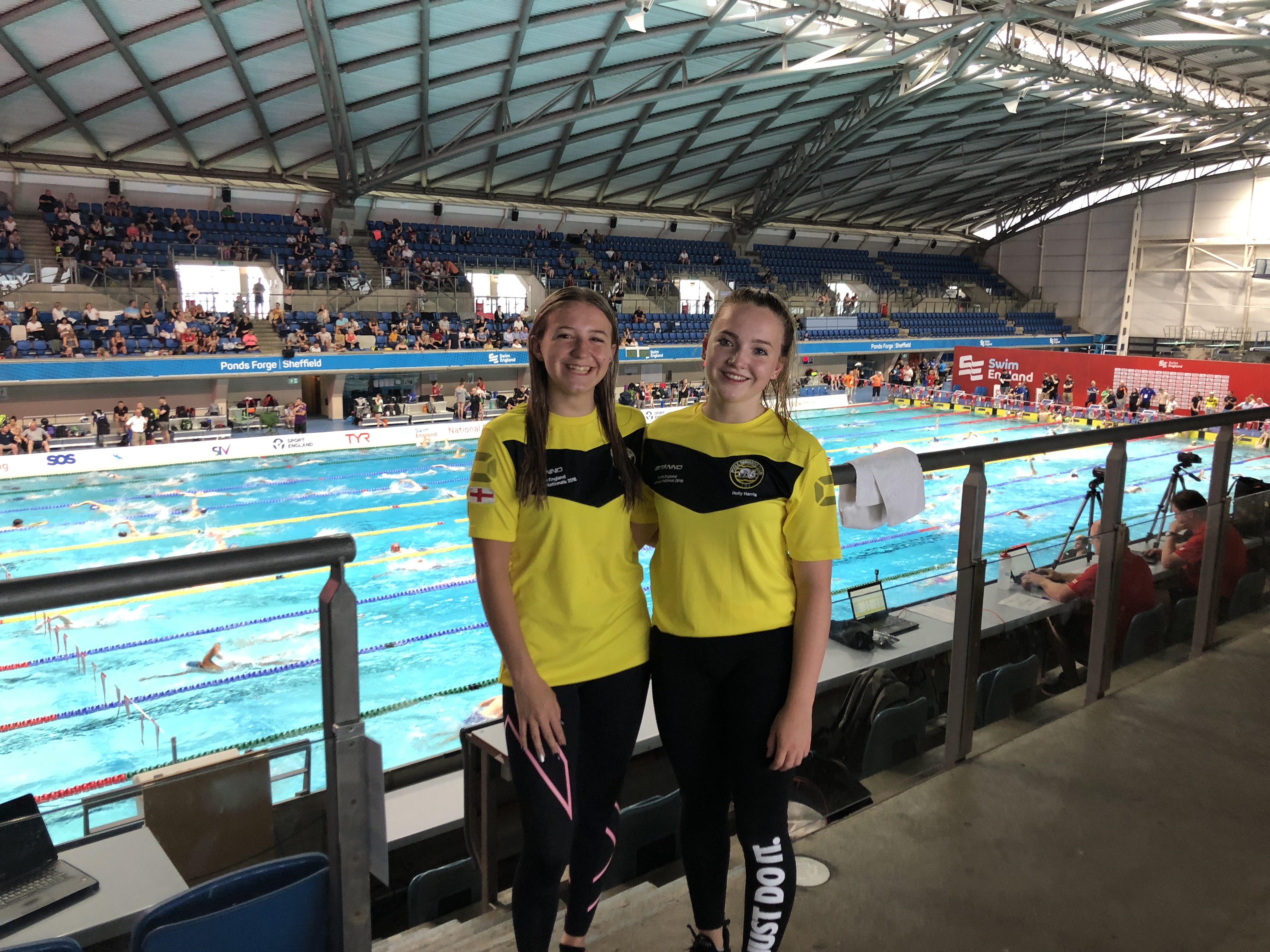 Next up was Izzy who went out very strong, the pace was held well until the last 50m where a slight tightening occurred.  The time was on her entry time and moved her from 15th to 9th in the ranking, which meant a return in the evening for the final.

Next up was Robbie in the 200m Free, a solid heat swim prepared him to qualify 3rd for the final, knocking 2 seconds of his personal best.

Shortly after, Catherine was up in the 50m Free and also set a personal best to qualify in 2nd place for the final.

A break was held after the heats allowing an opportunity for training for some of the squad, whilst Robbie and Miles could prepare for the 1500m.

With similar personal best’s the pair were pitched in lanes next to each other.  Miles took an early lead and held on to a solid pace throughout, with Robbie dropping splits in the last 500m.  Miles touched in 17:10 earning a PB of 7 seconds, and Robbie not far behind touched in 17:14 a PB of 5 seconds.  Miles finished 9th and Robbie 5th. 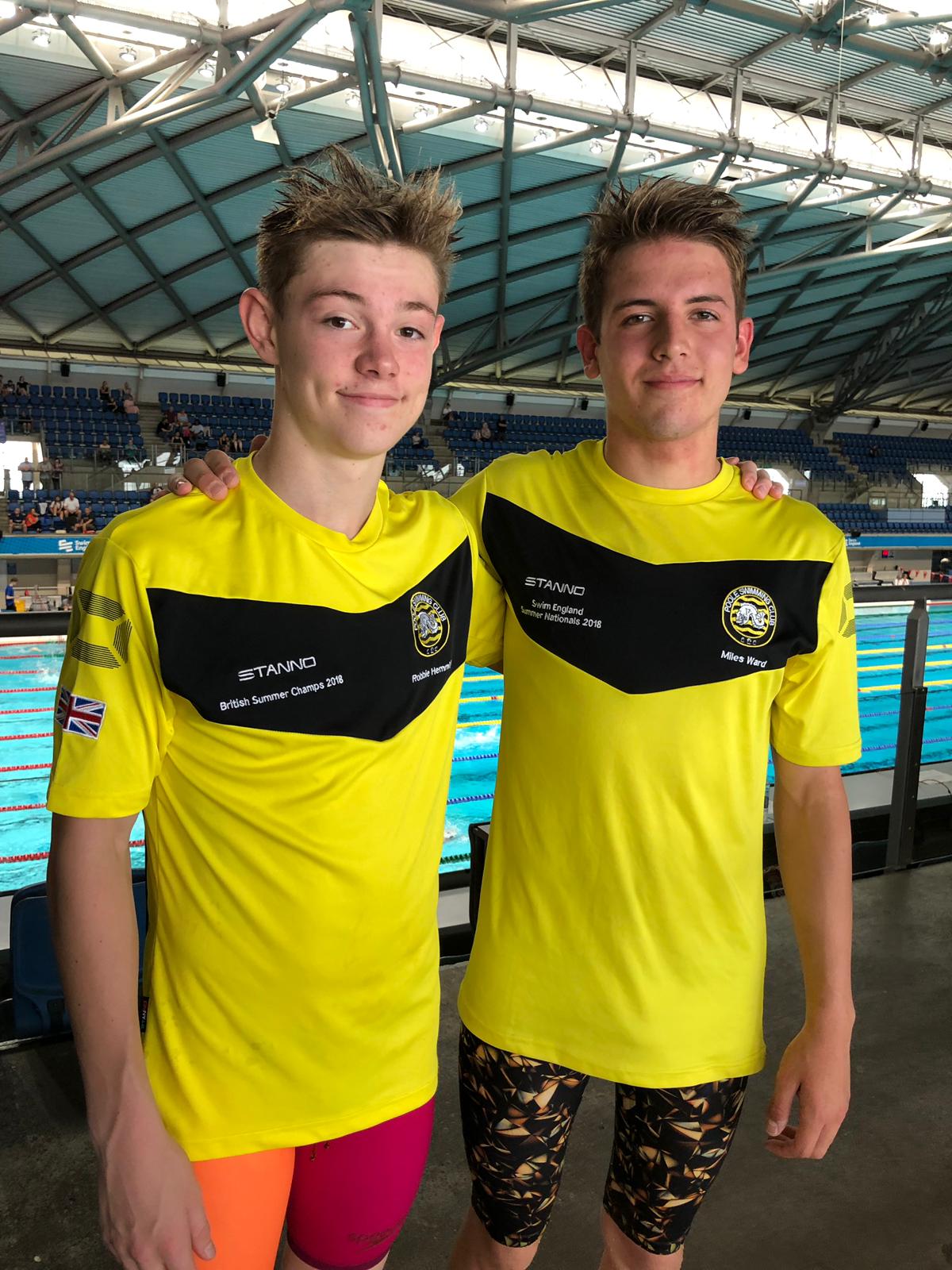 Izzy, Catherine and Robbie returned at different times to prepare for their finals based on their personal timelines.

Izzy in the 200m Breast-stroke final was tasked with going out in less strokes and a longer stroke whilst keeping the stroke speed, to save speed for the second half.  After the first 50m Izzy was in 4th place and had gone out quicker with 3 less strokes, the stroke length remained at the half point turning in 6th, where Izzy remained until the finishing touch.  The time was 2 seconds quicker than the heat and an impressive step up in rankings.

Catherine was tasked with maintaining an even speed throughout the whole 50m and brilliantly did just this to touch in another new PB to claim her first English Nationals medal claiming the silver.

Robbie went out very similar to the heat and held on to the same pace, he went quicker than the heat but with impressive step ups from the rest of the field had to settle for 7th position.

Catherine up first put in a solid heat swim with a great hold of the water and arm speed, seeing her qualify for the final in 7th position with a slight PB.

In the 800m Robbie and Ryan were in the same heat, at different ends of the pool.  Both boys set off well.  Ryan put in a great effort for his first Nationals and touched just shy of his personal best finishing 13th.  Quickly after his race he was driving down to Wales to compete for the South West in the School Games in Tri-athalon. 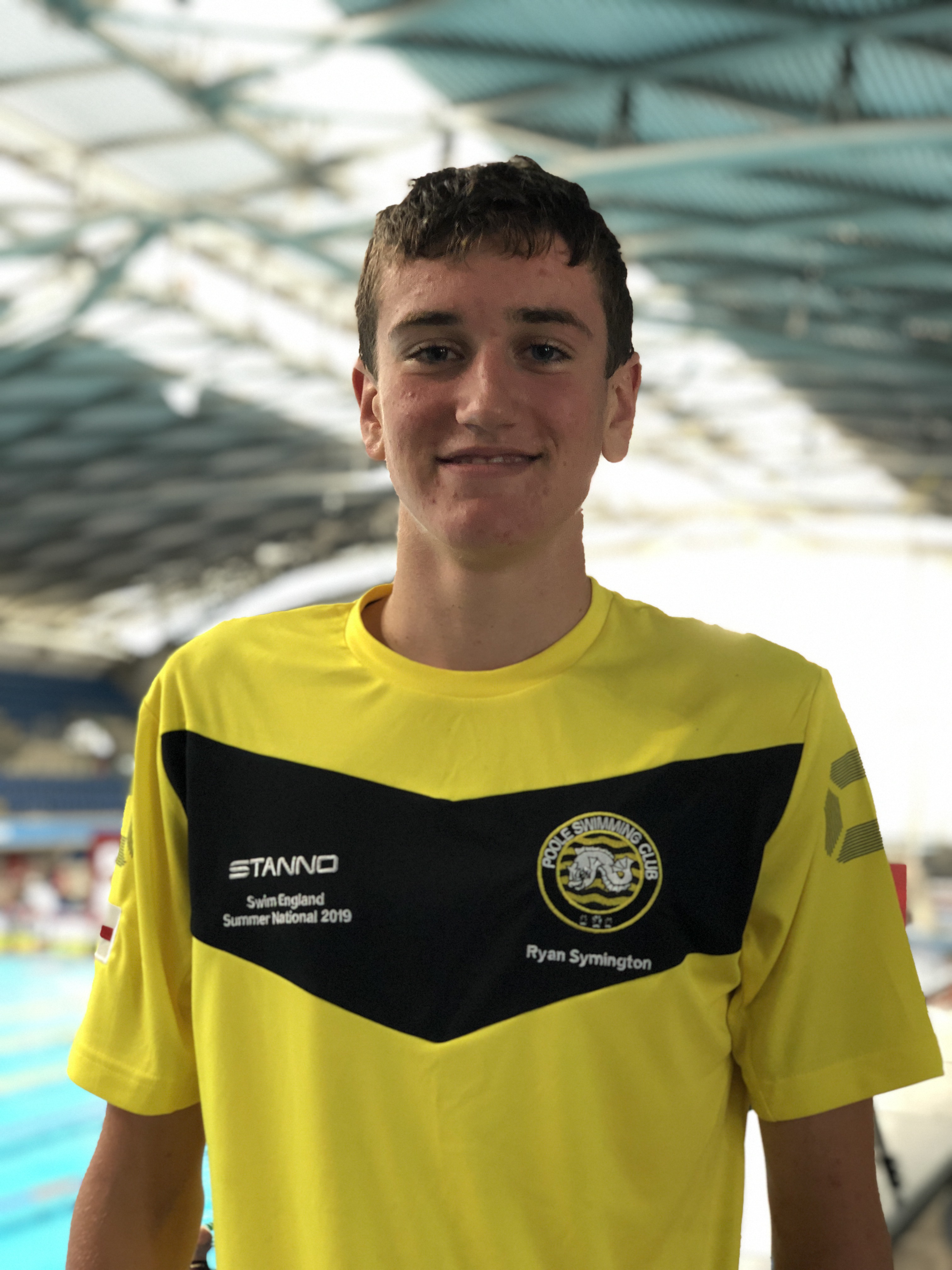 Robbie paced his race well, keeping an even pace for the first 600m, then coming back strong moved himself up from 5th place to claim the Bronze medal in a new Senior and Junior Club Record by 4 seconds!

Day 4 was the busiest day of the meet for Poole with Catherine and Ella in the 100m Free, David S and Oli W in the 50m Breast, then Alex PA, Aimie Q and Teagan-Mae G in the 1500m.

Catherine was up first and put in a solid heat swim, the results was half a second outside of her best finishing her 13th overall.  Ella dipped under her entry time and broke the minute mark to qualify 3rd for the evening final.

David S coached by Becky put in a storming heat to come through strong and take the win, earning a second personal best, a Club Age Group record and placing him in the pole position for the evening final.

Ollie W also delivered a strong heat, just shy of his personal best but enough to qualify him 7th for the final in the evening

Alex and Aimie warmed up together and were a heat apart in the 1500m.  Alex was up first and went out strong and just tightening up slightly in the second half touching just outside her entry time to take the 10th position.  Aimie paced her 1500m evenly throughout and touched just outside her personal best with a confident swim that placed her 6th overall.   Teagan in the final heat set off strong, dropped a little in the middle 500m but put in dogged determination in the last 500m to touch outside her best and place her 9th overall. 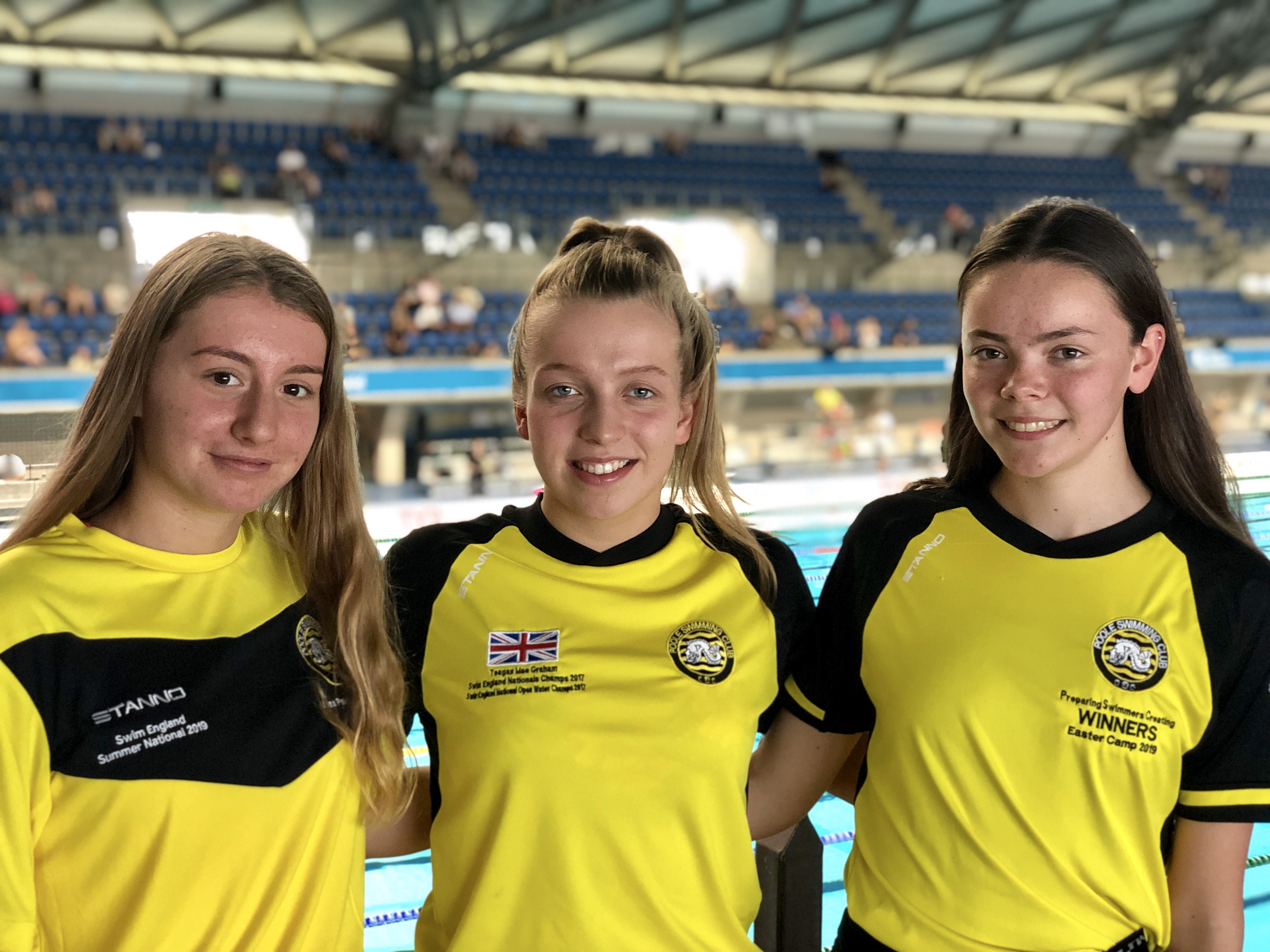 The evening finals came around quickly, with the boys standing up for the 50m Breast.  David prepared well for his race and stood up to battle, a little tense his time was just outside the mark he set in the heat and finished 5th.  All ready knowing that a big area to work on next year would be on his starts.  It had been an impressive season and one that him and coach Becky along with club are proud of.

Ollie also was just shy of his time set in the heat and coming in with a line of swimmers finished with an awkward last stroke.  This was Ollie W’ last swim for the club in which he had progressed through the squads over a 9-year-period always having a warm personaility, and brilliantly funny, rogue of a chacater, taking everything in his stride from his first Dorset’s to reaching the highest domestic competition of British Champs.

We are hoping to convince him to coach, whilst he works saving for a traveling trip of a lifetime. 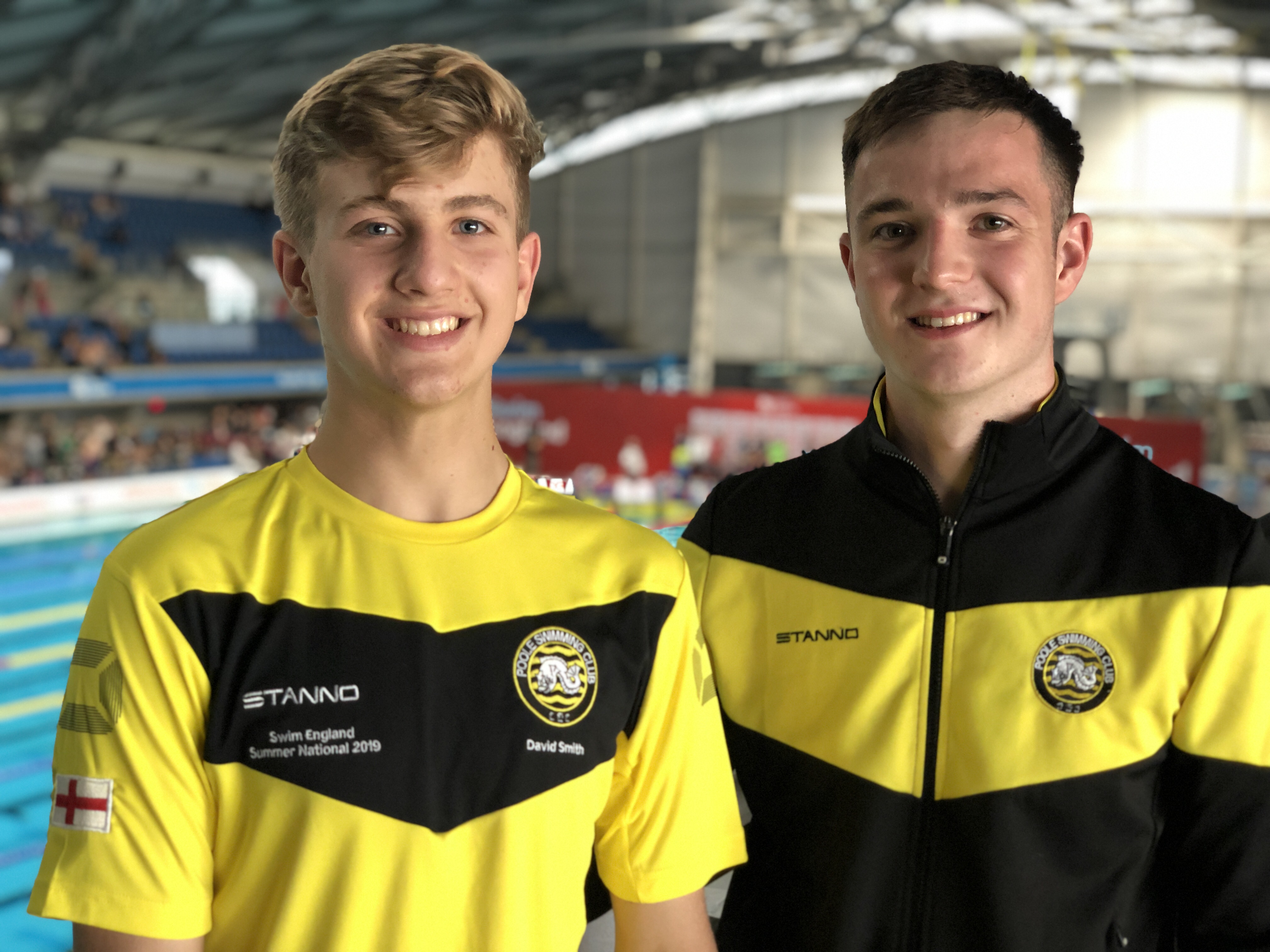 The last final for Poole Swimming Club was Ella in the 100m Free, qualifying third Ella had psyched herself up and had just one area to focus on from the heat.  With rugged determination Ella blasted down the first length and truning in fourth would have her work cut out for the second half, she had moved up to third with 20m to go and held on to claim her first medal at this level in a new PB and step up from the heat 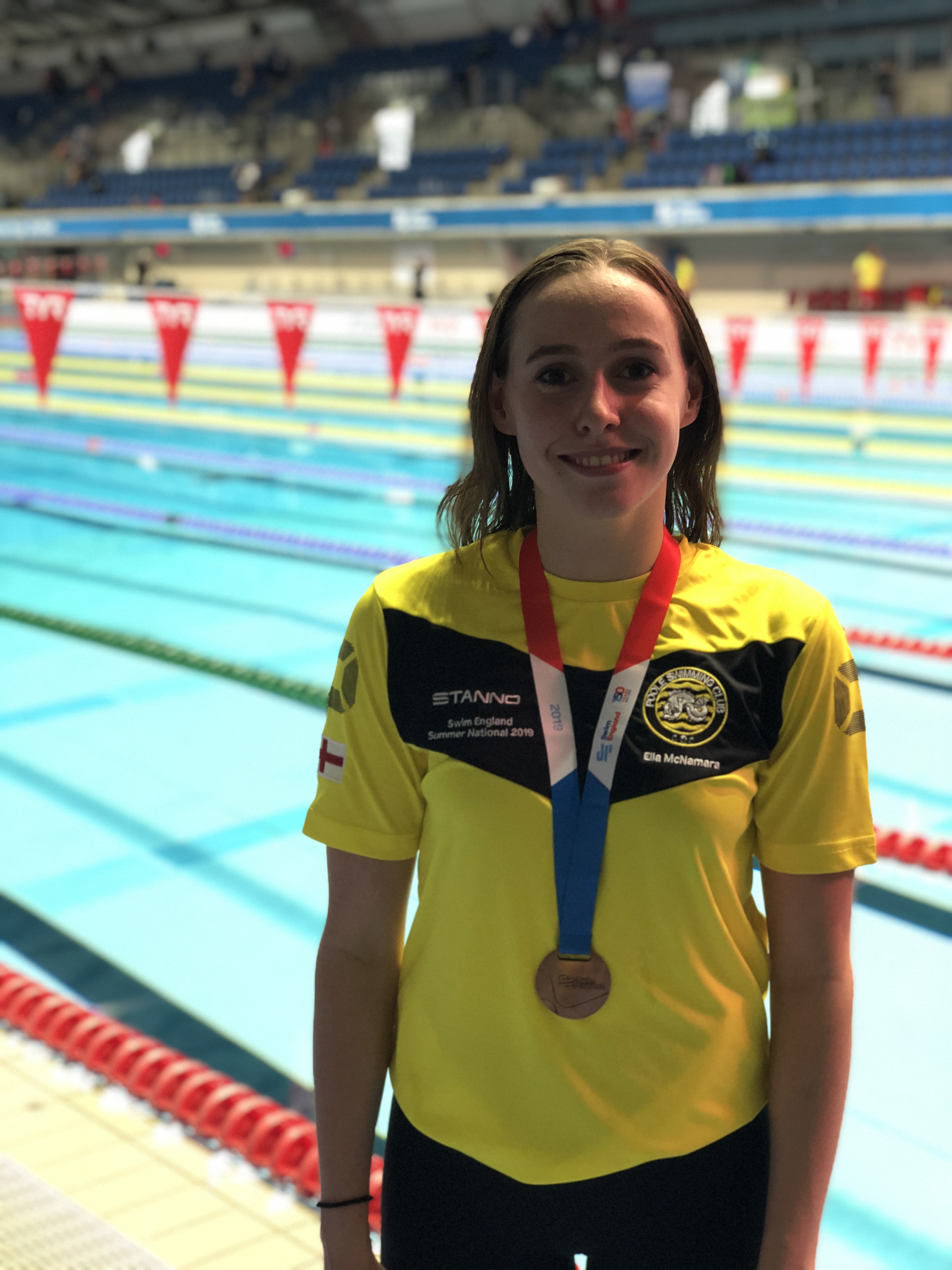 Was a quieter last day with Catherine in the 50m Fly and Robbie in the 400m Free. Both came down later to the pool and prepared well. Catherine held an amazing start and underwater section to gain a lead in the heat and maintained this to the end touching in first in a new PB, qualifying for the final in first place.

Robbie set out with a conservative pace and swam with decent pacing touching on his PB and qualifying for the final in 7th, he wasn’t happy with the race and knew he could do more.

The finals on the last day were pitched slightly earlier and both Catherine and Robbie warmed up at similar times.

Catherine was up first and was determined to drop into the 28 seconds.  With the started holding the swimmers for a long time on the start, it had’nt gone quite as well as the heat, but again the underwater work was fantastic and pulled Catherine into the top 3 places, by 25m Catherine was still third but kicked strong in the last 15m to come through and claim her second silver medal of the week.  The time another step up and just shy of her ‘project 28’ challenge in 29.12.

After two weeks of competition and on his 20th race Robbie character meant he would give it his all, and although a risk coach and swimmer agreed on swimming at 200 stroke technique, involving a more aggressive leg kick.  Robbie led the heat out turning in 59, and at the half way point was on 2.04, he maintained the lead through out finished a full 6 seconds ahead of the time he set earlier in the heat earning the Gold Medal and another Club Senior and Junior record.

The two weeks had seen Poole swimmers earn 10 medals, 2 x British Records and a Dorset Senior Record being broke and five Senior/ Junior Club Records being broken.  Week 2 at the Swim England Nationals had seen 24 out of 26 top 10 finishes.