Ross, Dan and Marcel went to Ponds Forge in Sheffield for the English Summer Nationals and day two produced an astonishing set of results for the Staines boyz.

Ross Philp started the team off to an excellent start with an fantastic heat swim in the men’s 17 years 200m Freestyle posting a time of 1.57.32, a personal best by over a second. This qualified Ross 4th for the final moving up from 8th on entry rankings. As per last year Ross withdrew from the final to focus on the 100m Butterfly.

13year old Marcel Chodnicki swimming at his first national championships produced an outstanding heat swim in the dual 13/14-year age group 200m Breaststroke recording a massive 7 second personal best, finishing over 10 meters ahead of the field in his heat qualifying second for the final in 2.35.58 after an entry ranking of 15th.

Next to go was big man Dan Pearson in the men’s open 200m Breaststroke, Dan showed outstanding control to pull away at the 100m mark in the final heat in his faster ever split of 1.09.97 and controlled the backend to produce a stunning personal best of 2.25.71, a best ever swim by over 2 seconds. This qualified Dan 2nd for the final from an entry ranking of 6th.

Staines Powerhouse Ross Philp had the final swim of the morning in the men’s 17 years 100m Butterfly. Last year’s national champ showed his class in the heats with an excellent swim of 57.57 a personal best by over a second to go into the final ranked 1st from an entry ranking of 4th.

There was a fantastic atmosphere going to the evenings finals with many Staines Swimming supports glued to their laptops in anticipation for the finals session after an outstanding mornings swimming.

Marcel Chodnicki was up first in the boys 13/14 years 200m Breaststroke final. Drawn in lane 5 Marcel demonstrated the improvements he has made with another outstanding start and the quickest reaction in his age group a 0.59. Marcel showed great control down the first 100m in 1.15.47 fractionally slower than his heat split holding 4th place. At the 150m Marcel remained in 4th place but it was incredibly close with just over a second splitting the top five. Marcel showed great composure and determination down the final length maintaining his stroke pattern as he pulled into third place and closed down on second. In the final five meters Marcel was gaining on the second placed swimmer and at the touch finished with a new personal best of 2.34.83 to claim third and a national bronze medal just 0.43s off second place. It was a remarkable swim considering Marcel is a year younger than his competitors and the maturity shown to maintain form and execute his race plan at such a young age was outstanding. Marcel’s swim now ranks him 4th in Great Britain in his age group; a phenomenal talent Marcel has an extremely bright future ahead after making significant progres this season taking almost 20 seconds off his personal best.

Dan Pearson went next in the men’s open 200m Breaststroke final again in lane 5, Dan got off to a good start controlling the first 100m out 1.09.49 along with seven swimmers sub 1.10 Dan was in 4th place. At the 150m Dan was in control and edged ahead to take the lead but it was incredibly close with only 1.5 seconds splitting the seven swimmers. Dan showed fantastic determination and race management skills to hold his form and pull away from the field along with Charlie Joe in lane 4. It was so close in the last 10 meters with a dash for the wall. Dan held his nerve and touched with an outstanding time of 2.23.41 to claim a national silver medal! This has been a remarkable journey for Dan slashing over 13 seconds off his personal best in the last 12 months, qualifying for his first regional finals, winning his first regional medal, qualifying for nationals for the first time and to come away with a national silver medal shows the character and determination the big man has at the age of 22 which has surpassed all expectations and Dan should be extremely proud.

After two finals the team had first secured a national Bronze medal then Silver, could it be possible to get the full set with Ross Philp going into the 100m Butterfly final ranked 1st?

There was no doubt!!

Staines Powerhouse produced an outstanding performance in the final in a stacked field with multiple British Champ finalists, Ross controlled the first 50m's turning in 4th in his fastest ever split of 26.87 and put in a phenomenal back end to pull away from the field on the last 50m’s to retain his 100m national Butterfly title. Ross finished just a fraction off his heat time in 57.63 despite a glide on the finish which is very unlike Ross who is so precise with his skills but showed how easy he made it look (although it wasn’t!). Ross showed great emotional control with the pressure of being ranked first, the opportunity to retain his title and the opportunity to bring home the full medal set for Staines Swimming. Ross’s new personal best now ranks him 7th in Great Britain in the 17 year age group.

It was a great day for Staines Swimming a full set of national medals, personal bests from heats to finals with swimmers making a made a real impact at national level and in Breaststroke! 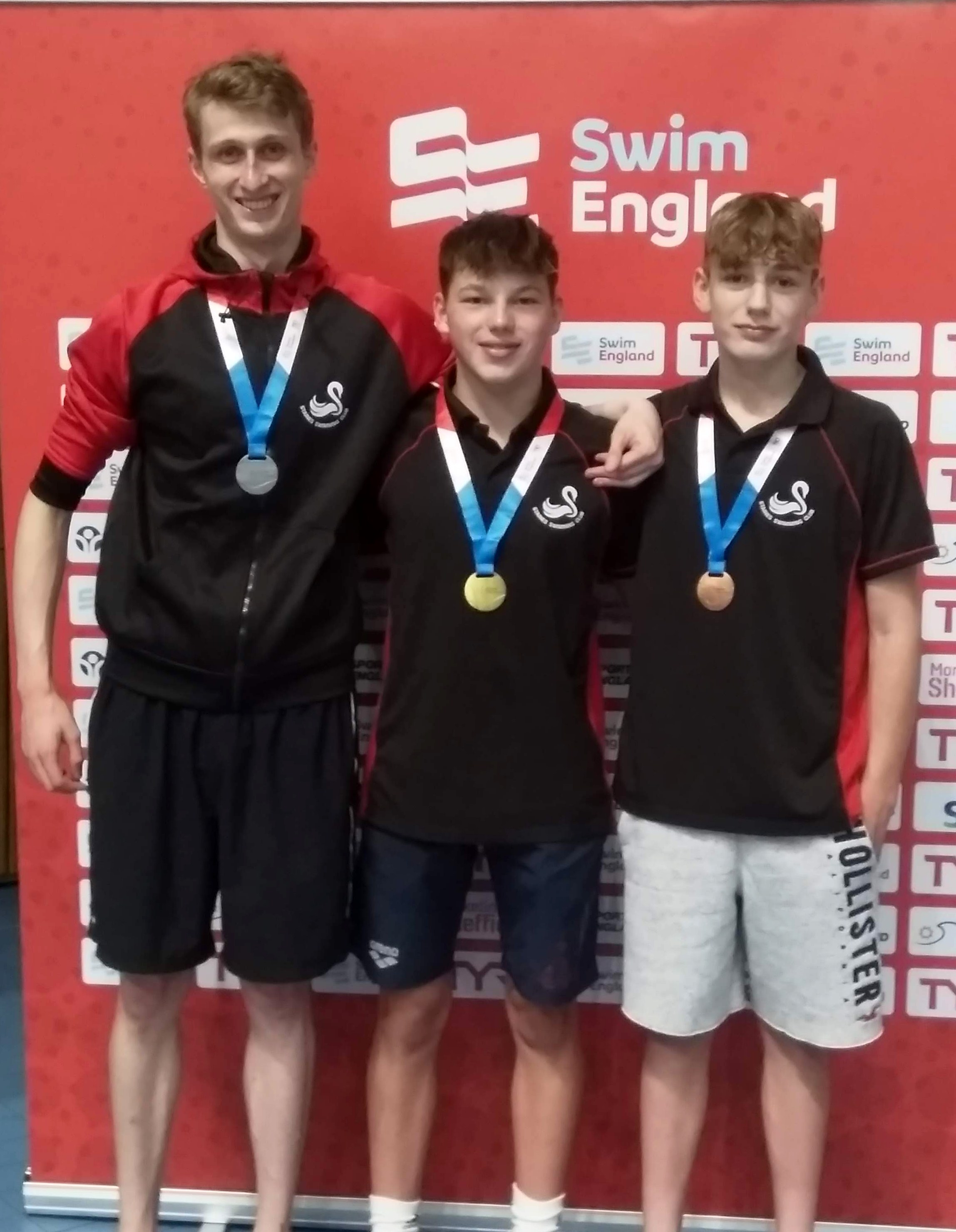 Day 3 saw Ross go in the heats of the 50m backstroke where he qualified 7th for the final just 0.13s off his personal best the first time Ross’s has qualified for a final in a 50m event. Ross then swam the heats of the 200m IM ranked 6th on entry Ross swam an excellent race and secured a personal best of 2.12.42 with his best breaststroke split this season 40.00s to go into the final in first place much to Ross’s surprise.

The finals session started with Ross going in the 50m Backstroke final where Ross swam exactly the same as the heats finishing in 28.15s to finish in 8th in a very close race as all 50m events are at this level.

The 200m IM final followed shortly after with Ross going in lane 4. Ross made an excellent and controlled start placing second at the half way stage with a best ever split of 1.00.93 from his favoured fly and back legs. This was a very high class field again with multiple British finalists as this year at British Champs there was a dual age 17/18 year age group. Ross swam what can only be describe as the best Breaststroke of his life actually pulling away from the field Ross looked phenomenal and had the commentators lauding plaudits. Ross recorded a split of 38.63 on the Breaststroke a massive all time best split and powered his way home on the freestyle leg to win emphatically in 2.09.74 over a second ahead of second place to claim his second national title and rank 8th in Great Britain.

Ross showed unbelievable determination to win the race and great self believe to back himself to up the stroke rate on the breaststroke leg an area Ross has struggled on all season due to his body type and specialisation occurring at his age in his form Butterfly and Backstroke events. Although Ross has had some special swims over the last 18 months this for me was his best ever and it really meant a lot to Ross. 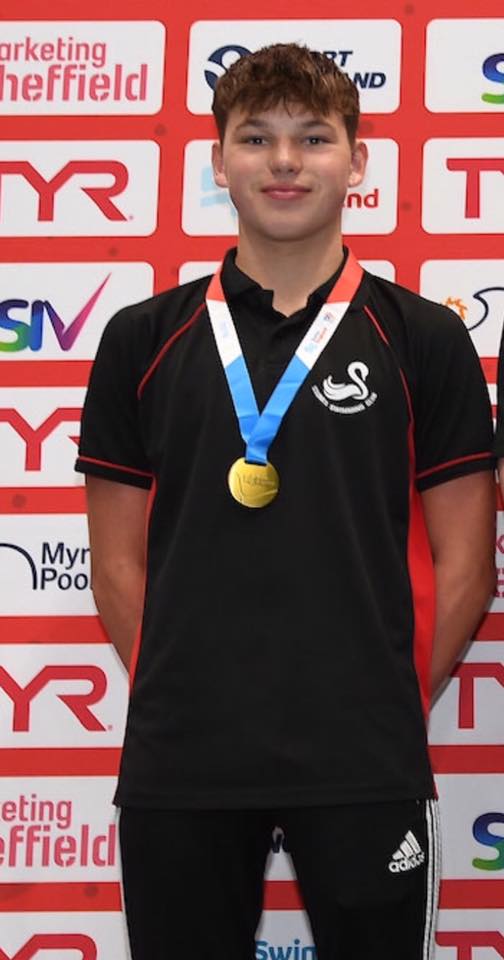 Ross received a great write up on the Swim England website which can be seen on the following link.

Day 4 saw Ross compete in the 100m BK after a well deserved lie in Ross took to the heats mid morning and swum a very even race, at the 50m mark in his heat Ross was in 10th place and his coach was sweating a little! Out in 29.52 one of the slowest splits in his age group Ross knew exactly what he was doing and powered home on the backend in 30.14 to finish sub minute in 59.68 to qualify 4th for the final. To swim like this is not easy and requires fantastic physical conditioning and supreme confidence in your ability on the backend!

Ross went into the final ranked 4th in lane 6, and made an excellent start maximising the use of the underwater section coming up just shy of 15m. Ross went out with purpose in 28.70 significantly quicker than the heats and left nothing in the pool on the backend pushing himself to his limit to finish in an incredibly close race, 2nd to claim the silver medal replicating him result from last year’s nationals. It was all about the finish and Ross executed perfectly finishing with a personal best of 59.32 just 0.02s ahead of third with six swimmers all break the minute barrier it was a very exciting race.

Ross had now completed the double triple! Two gold’s and a silver in 2018 and now in 2019 to become Staines most decorated swimmer at National level. 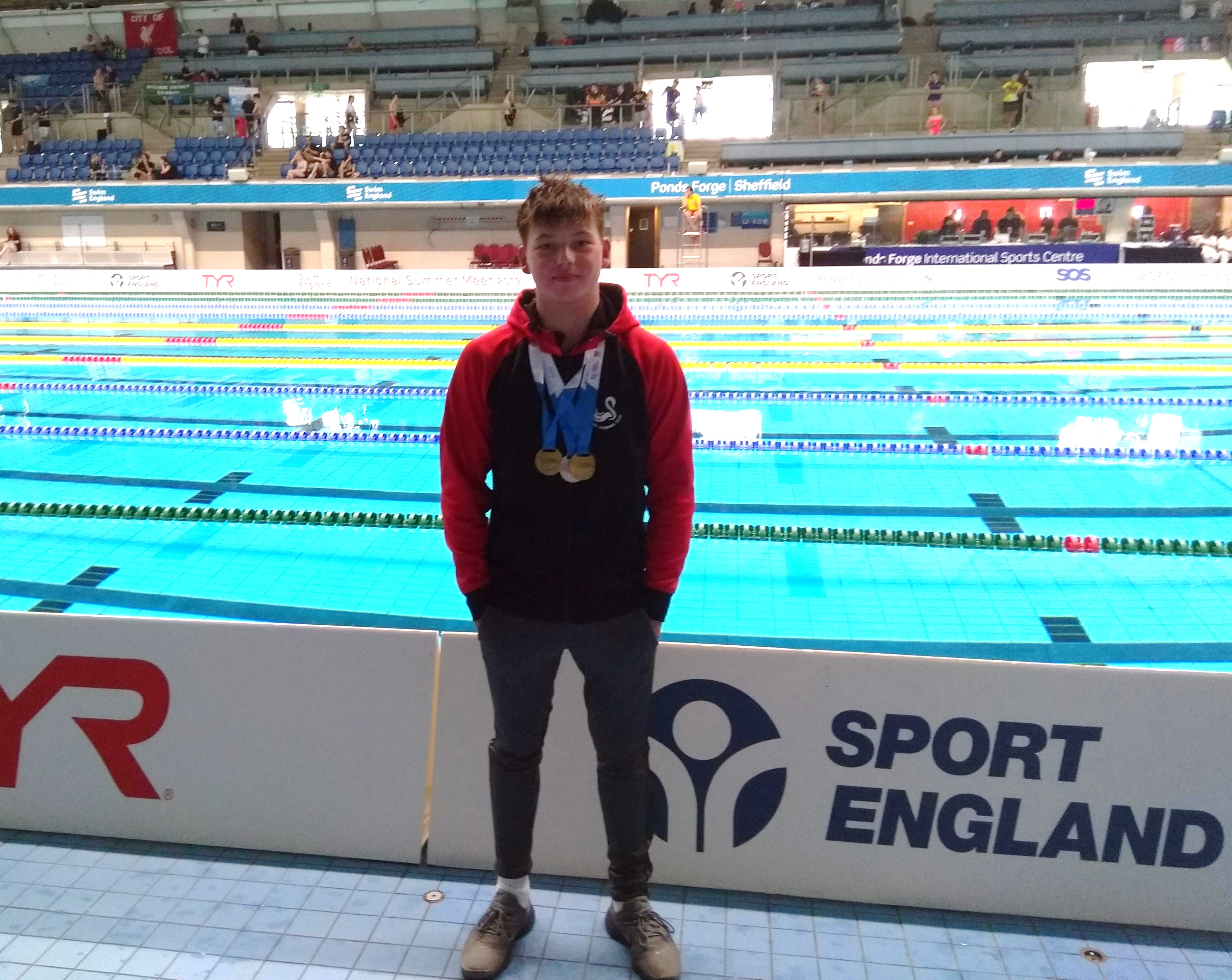 The final event of the competition was the 400m Freestyle at the end of a long hot and very humid week in Sheffield and Ross once again swam a controlled and even race out in 2.04.77 a second quicker than the heats Ross came home strong on the second half of the race in 2.06.11 to finish with a new personal best of 4.10.78 in 7th place.

A great week for Staines Swimming at English Nationals saw a record 5 medals won, multiple personal best’s heats to finals and most pleasing which often goes unnoticed is the manner in which swimmers have performed. Confidence shown in their abilities to execute race plans and mange race situations (tactical training), emotional control not to be impacted by the situation, pressure of the event and others around them (physiological training) and being comfortable and relaxed at this level! 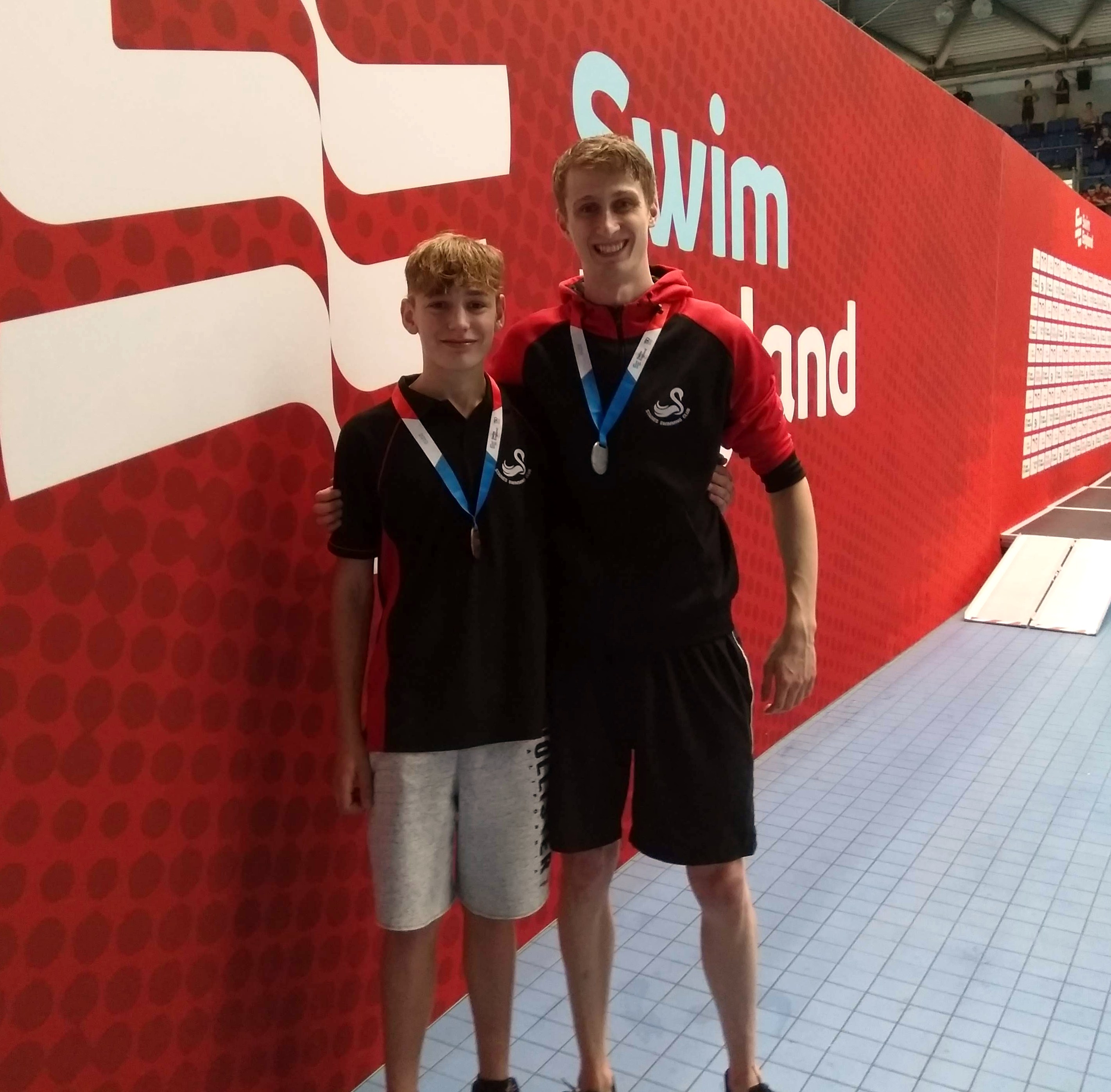 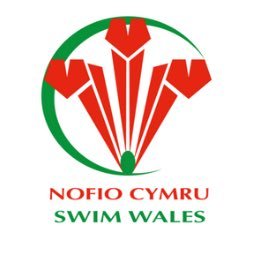 Newly appointed ladies club captain Daisy Degen lead by example putting in a great displays to secure a place in the 200m Freestyle and Butterfly finals finishing 5th in the 200m Freestyle moving up two places from heat rankings and improving on her heat swim by 0.60s. In the 200m Butterfly Daisy once again improved on her heat ranking of 7th to finish 5th improving on her heat time by 2.44s finishing in 2.38.89 a seasons best. This shows how Daisy has developed her race skills and confidence to manage heat and final swims setting an example to the clubs younger swimmers.

Josh Welch in his final competition before heading off to university swam personal bests in his favoured 50m Butterfly 28.56 and 100m Freestyle 1.00.85.

Rosie Jones swam a cracking 800m Freestyle showing great improvement in aerobic conditioning with a 3.10s improvement finishing in 14th place in 10.50.80. Rosie also broke the 40s barrier for the first time long course with an excellent 0.77s improvement in the 50m Breaststroke in 39.66.

Swim Wales provided swimmers with a great experience and national meet format at the end of the season and a platform for future progressions so a really positive experience to build on for next season.

This is my final report for the club; I just wanted to thank all those members who have supported the new ethos and program developed whilst I’ve been at the club and thank everyone for the cards, leaving gifts and emails I’ve received, your sentiments and feedback are very much appreciated.

I would like to wish all of Staines Swimming the very best for the future.

Also all the best to your new coach Marcin I’m sure he’ll be a great additional to the team.