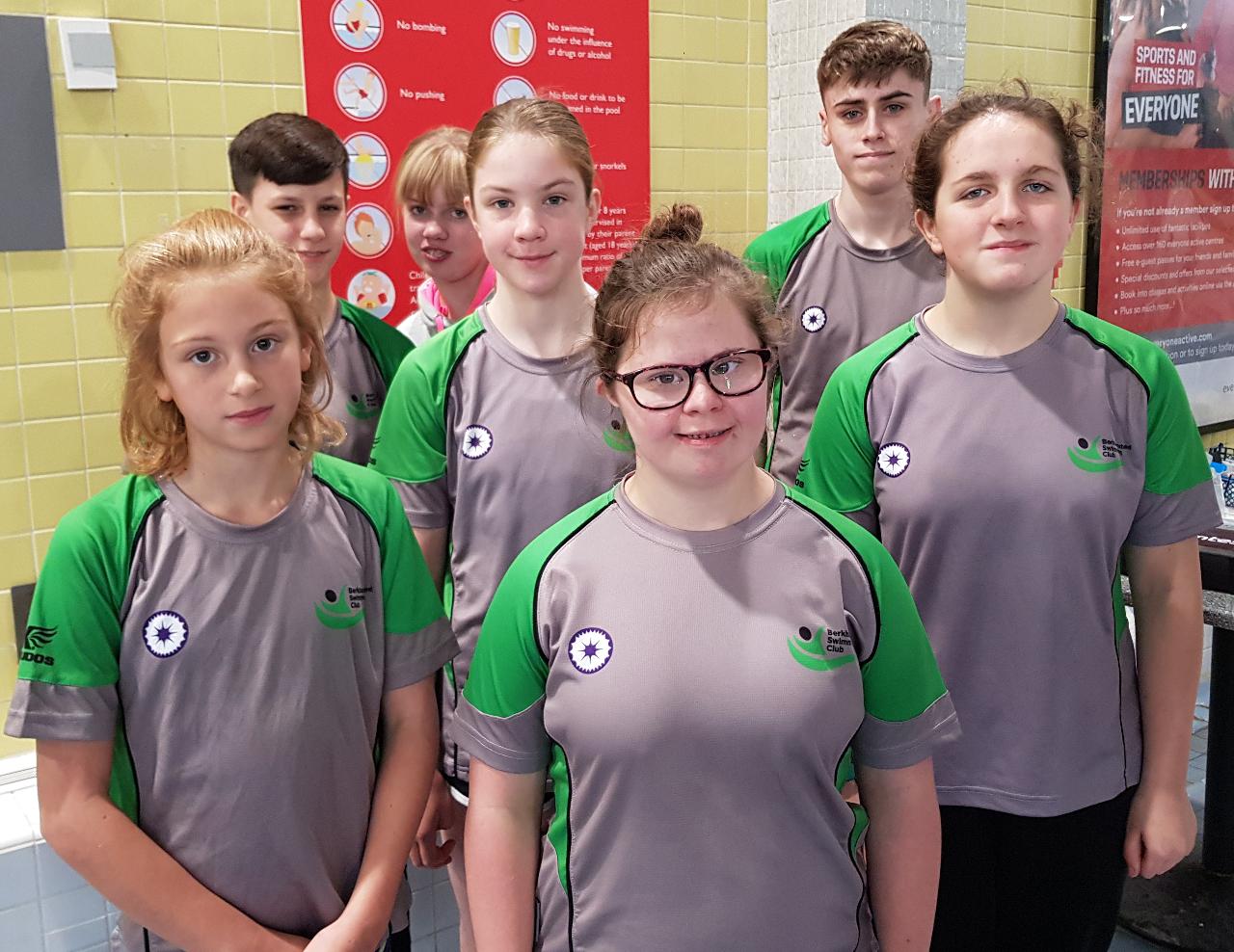 It was another busy weekend for Berkhamsted swimmers as 18 of them competed at the 106th Hemel Hempstead SC Birthday Open.

The weekend started inauspiciously with slightly below par 200m Individual Medley swims fro Club Captain Vicky Ayles, Destiny Carnell & Lydia Wisely although all 3 were within 3 seconds of their best times and Ayles 2:57.34 was enough for Gold in the 16 and Over age group.

Destiny Carnell and Vicky Ayles showed they were warmed up after the IMs with good swims in the 50m Free and it was gold again for Vicky Ayles in 33.16 with a further Gold for Down Syndrome GB swimmer, Ciara McKenna as well.

9-year-old Nat Costelloe completed his first 50m backstroke in 48.41 for 4th in age and completed his first 100m Breast in 2:10.82 before Vicky Ayles made it 3 Golds in the session taking the 100m Back within 0.3 seconds of her best in 1:22.55 and Ciara McKenna also collected her second Gold in the same event. Destiny Carnell showed consistent form with her own backstroke.

Eric Batt smashed out what looked to be a massive pb in his 200m IM finishing in 2:58.34 but had made a mistake on a turn and so his time sadly did not count but gave evidence of his ability. David Graham looked tired in his own IM for 4th and Chris Hughes repeated his pb from a week earlier in taking silver in the Open Age group.

The second session started in great fashion with the 200m Free as Heidi Batchelor-Hannaby dropped 5 seconds to 3:33.91 for 4th and another 10 year old Sophie Davies went even better to improve over 20 seconds to 3:37.57. Mia Maslen-Wollington clocked a 6 second pb as she led from the start to a heat win in 2:34.32 and her own gold medal, the attack which she showed also managing to include a 100m pb at halfway in 1:15.49. In the same Age Group Kate Hopper showed her inherent talent to improve almost 40 seconds with 2:45.98 and another gun to touch heat win and 4th overall. Her swim included a 50m pb of 34.15 and then Destiny Carnell also closed on her own best time as her consistent swimming produced a 2:43.40.

Ciara McKenna produced another first place with her own 4:36.98.

Nat Costelloe claimed another 4th in the 50m Free in another pb, 43.68 whilst yet another first timer, Conall O’Brien showed good strength of character when a faulty starting machine caused him to dive in before the official start and he had to climb out to recompose himself. He did to great effect claiming bronze in the 10 years age group with a 2 second best in 40.47. Eric Batt won Gold in 32.28, David Graham dropped to 30.37 for 4th and Chris Hughes went 28 dead to pick up the bronze.

In the 50m Back Sophie Davies clocked a best time 56.29, Mia Maslen-Wollington & Kate Hopper also improved to 38.03, silver medal & 39.46, 4th, respectively with Kate Hopper once again leading her opposition home in convincing style and Ciara McKenna claimed yet another medal with bronze.

In the 100m Fly, Eric Batt was delighted with a first legal swim to take gold in 1:26.61 and his own heat win. David Graham posted 1:23.49 and Chris Hughes wrapped up an impressive day personally dropping 2 seconds to pocket Gold in 1:06.91.

The first day ended with the girls’ 100m Breast producing a 4th place for Sophie Davies with 2:12.34, another heat win for Hopper 1:40.80 with another huge pb for 4th, bronze for Mia Maslen-Wollington improved another second to 1:36.57 and bronze with Tamsin Moren claiming another Gold in a consistent 1:26.15.

Sunday was the reverse events starting with the Girls’ 200m Backstroke. Great weekend continued by lopping more than 15 seconds off her best with 3:12.17 then Lydia Wisely kept the momentum moving with her own pb of 2:53.59 and Destiny Carnell improved on her time from the Harpenden met locking 3:02.88.

George Thorne began his campaign with silver in the 50m Fly with 30.22 and in the Girls’ 50m Breast Megan Royal picked up 2nd in her heat improving to 46.67 under 50 seconds for the first time and Kate Hopper went 46.01 for another 4th place before Tamsin Moren wrapped up Gold with 38.19.

Megan Royal dived back in for the 100m free and sliced off another 26 seconds to go 1:23.44, Kate Hopper gained her first medal with silver in 1:11.80 improving her 50m pb on route from the previous days 34.15 to 33.23. Moren finished that event with her own bronze medal & Ciara McKenna’s golden weekend continued in the 100 free with another 1st place.

George Thorne collected another gold in the 100m back while in the 200m Breast Megan Royal posted a first-time swim of 3:42.64 to win her heat. In the same 200m Breast Mia Maslen-Wollington claimed bronze with 3:28.66 which was itself a 2.5 second pb and Tamsin Moren made it a Breaststroke clean sweep when taking gold in 3:03.02.

Megan Royal continued to show how much she has improved recently slicing nearly 17 seconds from her 50m fly best to finish 2nd in her heat in 45.74 and Ciara McKenna pocketed a final gold in her 50m fly as well. Caitie Walters has found a change of clubs affecting her recent form but is now bringing times down again and claimed gold in her 50m fly age dropping nearly a second to 36.80 with better underwaters and longer strokes.

George Thorne took silver in the 50m breast and gold in the 100m free despite not quite being at his best.

In the 100m IM a first time effort from Megan Royal produced 1:34.84 for 4th, Mia Maslen-Wollington, tired after her previous efforts claimed silver as did Tamsin Moren although both just outside their best times.

In the final event of the meet Caitie Walters showed her strength by lowering her month old 200m Fly time to 3:16.42 to come away with the silver medal.

With next week bring the Luton Open and British Masters in Sheffield it is a frantic time for the club in terms of events but shows just how thriving the club continues to be offering opportunities across all ages and levels of ability for the athletes to enjoy the sport.