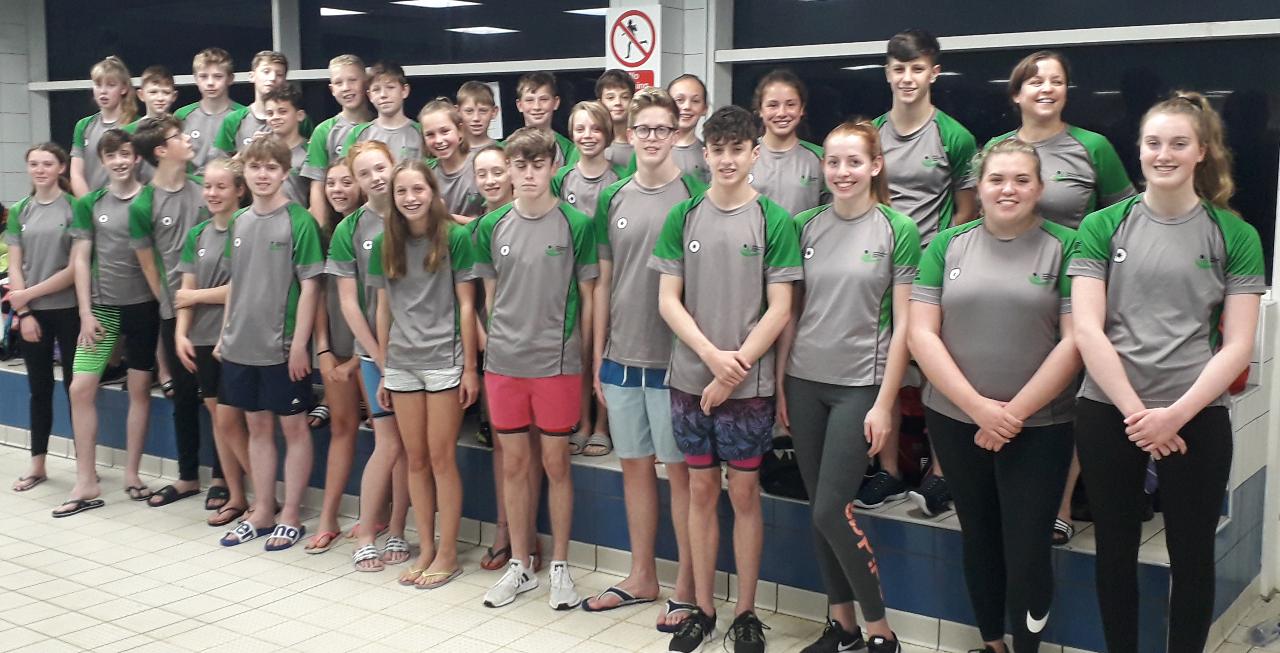 The top team competition for clubs in the UK is the annual National Arena League and the excitement it brings, no matter what division, is clear for all to see.

Berkhamsted find themselves in the third tier of the London League and this year’s first round saw them in Southbury Road, Enfield against 5 other teams from Hertfordshire for the evening’s racing.

The meet could not have started better with Issy Soulsby’s returning confidence seeing her attack the 200m IM and bring home victory by just ½ a second in 2:37.62. This was followed by a 4th place for Chris Hughes in his first IM for the club, and a new pb of 2:31.45

The format then allows for a first set of 8 relays and the 9-11 Girls squad of Jess Cutler, Seren Majed, Nell Coster & Seren Diehl, all knew to this level, showed no nerves with a splendid 2nd place in their 4 x 50 Freestyle team race some 5 seconds ahead of the 3rd team. The boys, Lawson Gray, Austin Clements, Riley Milne & Joe Harrison replicated the 2nd place in a tightly fought contest.

Mia Maslen-Wollington claimed a County Consideration time (CCT) with her 1:37.60 in the U14 100m Breast before Tracy Van Deventer showed all the determination expected from her with a fighting last 25m to claim back a position in the Open 100m Fly with 1:19.51.

For the boys, Ish Rahim stormed to victory in the Open 100m fly when his skills around the walls destroyed the rest of the field to provide an 8 second winning margin in 1:02.24.

Seren Diehl took her second 2nd place in just 10 minutes with another pb, ducking inside 40 seconds for the first time in her 50m Fly in another tight finish where just ¾ second separated the top 3, picking up the 2nd place with a head down, perfectly spotted last 5m into the finish. Lawson Gray set his own pb in the boys’ race with 40.78 for 4th.

Ronan Philbin set a new best for his 100m Back in 1:24.99 as he develops 4 good strokes and then another first time Arena Competitor, Izzy MacDonald smashed out 1:22.50 for the 14/15 Girls’ 100m Fly lowering her best to 1:22.50 and including a pb for 50m at halfway followed in the next event by 13 year old, Alex Kalverboer, swimming up an age group, being far from overwhelmed and setting his own best time of 1:23.35.

Issy Soulsby narrowly missed making it 2 individual wins for her, being outkicked in the last few metres but still managing 1:10.73 for 2nd in the Open 100m Back and Strakosch made it two from two for the Open Back strokers with his own 2nd place finish showing better skills again underwater off every turn to stay in contention.

In the 9/11 50m Breaststroke both Saff Harding and Austin Clements chopped the massive amount, for a 50m race, of 4 seconds from their pbs with Harding coming home in 3rd. Caitie Walters followed this with her own 3rd in the 12/13 100m Fly with a well paced CCT of 1:26.53, digging deep to hold off the Potters Bar swimmer in the last 25m with another good finish

Going into the final quarter of the gala the club had climbed to 4th in a seesaw battle with the 4 teams from 2nd to 5th in a close battle.

Ronan Philbin gave further evidence of his improvement when lowering his 100m Fly to 1:26.90 for 4th and Yazeed Swarray-Deen improved his 100m Free to 1:13.95 for the boys.

14 year old Tamsin Moren stepped up to the Open 100m Breaststroke event and provided a controlled masterclass in how to dominate a race, forcing the others to chase her from half way to come home in 1:22.67 and Dan Chennells, in an unaccustomed event for him, attacked his own Breaststroke for the Open Men, hanging on to improve by over a second to 1:18.71.

For the boys’ Alex Kalverboer, in his own age group just missed a win with 1:06.54 for the 100m free, just being touched out in the final stroke.

Tamsin Moren then showed her endurance by wiping the floor with her opposition to clock a time less than 0.75 seconds slower than her Open victory. These performances won her one of 2 female swimmers of the night awards. Lorenzo Evans, yet another first time Arena swimmer, swam faster than ever before for his 100m Breast and then Ish Rahim doubled his individual win tally, being the only swimmer inside the 60 second barrier, again taking time out of his opponents during every underwater phase.

The final relays arrived with the team having slipped to 5th. The 9/11 girls Medley team saw Saff Harding on Breast replacing Seren Majed from the Free squad and they claimed another 2nd place and could be a force to be reckoned with over the rest of the League rounds. The boys were unable to repeat their 2nd from the Free team race, picking up 5th in their Medley race.

Emma Hockney led off the Girls’ 12/13 Free team with Caitie Walters coming in for Mia Maslen-Wollington from the Medley squad and, anchored home by Briers again, fought to 2nd place in 2:11.76.

The U16 girls made it a double win in their Medley when a storming fly leg from Alex Farnham left Lydia Wisely with the simple job of bringing the team home after being set up by Abi Hewson (Back) and Tamsin Moren (Breast).

With final placings still in the balance the Open Men knew they had to perform. Dan Chennells posted 26.69 as lead off, George Thorne followed with 27.17, Alex Kalverboer 30.09, Chris Hughes 28.02, Owen Strakosch 28.03 and Ish Rahim rounded off a rousing victory amid the hubbub of noise that always accompanies the final event with a 25.67 to take the victory and confirm 4th on the night in 2:45.89.

Other members of the squad were Eric Batt whose lead off backstroke leg for the boys’ 12/13 medley relay was a pb of 37.81, George Gray, Eze Svichla-Fekete, Pierce Philbin, Lara Coster who all contributed to a great night of swimming for the club whose strapline is #itsallabouttheteam.