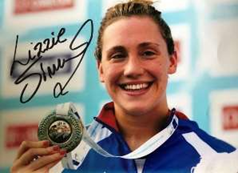 A special boot camp took place at the beginning of September led by Patryk to help kick start the new season after the summer break. Held over two days, swimmers took part in pool and classroom sessions, land training and, on the second day, were joined by Lizzie Simmonds, who is a former European 200m Backstroke Champion and who earned a 4th place at the 2012 London Olympic Games.

Lizzie helped out with the technical aspects in the pool sessions and spoke about handling the demand of competitive sport. She also kindly stayed a little longer to chat to parents about how best to support our swimmers and gave an interesting insight into how she progressed through the ranks of her local swimming club all the way through to her Olympic debut.

Some of her sporting achievements are: