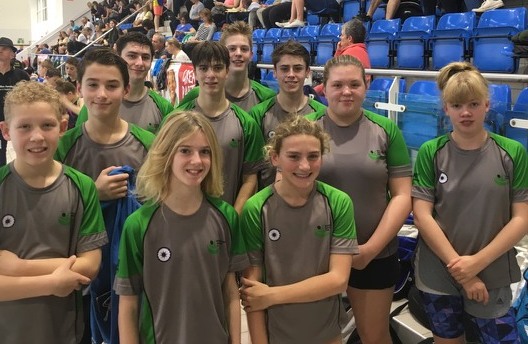 With the annual competition season now in full flow for the Berkhamsted Swimming Club athletes the Watford County Qualifier meet is always a key target. This year was no exception and saw a hatful of super swims from the youngsters.

Pride of place has to go to Alex Kalverboer who set pbs in every one of his swims. He began the first session in a County Consideration (CCT) in the 400m Free with an even paced 5:15.38 to take 5th overall and lower his best by over 14 seconds and followed it up with the club’s first County Qualifying time (CQT) of the meet in the 100m Breaststroke. Finishing 5th in his heat against older swimmers he claimed the bronze medal dropping a second and a half to post 1:28.92.

Abbie Briers had also swum the 400m Free dropping 9 seconds as she disputed the lead in her heat for all 16 lengths before recording 5:20.04 (CCT).

Alex Farnham is an infrequent competitor in Open meets but showed her ability in the 100m IM when she improved a massive 8 seconds to clock 1:24.25 and finishing second in her heat closing on the winner with every stroke in the last few metres.

In the boys 100m IM Tom Holmes-Higgin showed a welcome return to form after a difficult year when he swam what would have been a first CCT had he not completed an illegal turn at half way but he knew now he was swimming quickly.

Alex Kalverboer improved one place on his Breast position to claim the silver in the 100m IM. His 1:18.86 improved another second and a half to go 1:18.46 for his and the club’s second CQT of the day. 16-year-old Harrison Bullock plucked out his first pb in the same medley event with 1:14.19, pipped by just a second by his twin Callum (1:13.13) swimming in the same heat.

The second session began with 10 year old Eva Lawson lowering yet another club record in the 200m back, taking it down to 2:49.99, CQT and Gold medal by over 7 seconds from the rest of the field, swimming further away on every stroke.

Tom Holmes-Higgin took the confidence from his Medley speed into the Boys’ 200m back and he finished 8th overall lopping 6 seconds from his best and his first CCT of the year in 2:47.14.

The 100m Free saw Eva Lawson rip up the pool again winning another gold by over 7 seconds dropping both her pb and the Club record again to 1:10.86 with yet another gun to pad victory. Vicky Ayles also improved her 100m Free time as she starts to build her confidence, clocking 1:09.60 with a smooth swim. Meanwhile, Ellen Northwood is swimming faster than for many months and touched home in 1:05.03, her best 100m Free since January 2016.

Chrissie Soulsby was third in her 200m IM heat improving by 12 seconds to 3:08.53 with 4 good looking strokes and Ayles was marginally off her 200m IM best in 2:56.07 but collected the reward of the bronze medal for her efforts.

Once again, Tom Holmes-Higgin improved his 200m IM going inside 3 minutes for the first time with 2:54.54. Harrison & Callum Bullock were again in the same heat with Harrison coming out on top in the last few strokes, this time in a pb of 2:40.21 against Callum’s 2:41.77.

The 50m Fly brought another gold for Eva Lawson in 38.24. Alex Farnham was in the same heat and made the event look simplicity itself improving a second on her pb for her first ever CCT as a perfectly spotted finish also won her the heat, she was in with 36.30 and then Ellen Northwood swam her own CQT in 31.49 for the bronze medal. The Boys followed on with Holmes-Higgin taking the win in his heat with another pb and CCT of 34.84, Macdonald was second in his heat with a pb of 31.56 whilst Callum Bullock was inside 30 seconds for the first time as he also won his heat in 29.56 to end the first day on a high for the club.

Day 2 began with a clean sweep of 6 personal bests from 6 swims for the boys in the 100m Back. Tom Holmes-Higgin resurgence continued with 2nd in his heat and another CCT in1:18.60. Alex Kalverboer continued his 100% hit rate of pbs at the meet with silver and a CQT in 1:14.83. For the Senior Boys, George Thorne dropped his time to 1:08.66, winning his heat, Callum Bullock went quicker than his best with 1:09.57, Owen Strakosch was marginally quicker than Callum Bullock with 1:09.17 (pb) and Cam MacDonald won the intra-club battle with 1:08.68 and a CCT as well.

Lydia Wisely was spot on her pb with her first swim of the meet in the 100m Back (1:23.22), Eva Lawson improved again to 1:19.13 dropping her own club best still further and Izzy Sansom placed 4th in the Open category.

Alex Kalverboer was the sole representative in the Boys’ 200m Breast but flew the flag well with bronze medal in 3:07.75. The time guaranteed him a place in the event at January’s county Champs in this event and he followed it up with 5th and a pb in the 100m Fly as he stole through to win his heat in 1:24.11. He completed his meet with a 100% conversion rate on pbs in the 50m Breast clocking 41.61 for 5th. Callum Bullock also improved to 38.23and both Thorne brothers George & Harry set pbs in 36.75 & 34.81 at the sprint Breast with Harry clocking another CCT. Eva Lawson’s heavy programme produced silver in her 50m Breast with third place in her heat (silver overall) from the slowest seeded lane 8.

Onto the 200m Free and Tom Holmes-Higgin produced a swim 7 seconds faster than ever before (2:35.27), Adi Cooper began his meet belatedly in 2:29.10 for 2nd in his heat, taking 7 seconds from his best and Owen Strakosch shaved more than 4 seconds from his best, starting quickly with 1:03.70 (nearly 3 seconds better than in his previous pb swim, and finishing with 2:11.09 and his second CCT of the season. His 4th place in the heat from unseeded lane 8 was evidence of how much he has improved.

Eva Lawson then destroyed her own best for the 200 Free with 2:34.02 taking her heat again from lane 8 as she carved another 5 seconds from her best improving her own CQT as well for yet another Gold medal and club record. She was immediately followed by Briers returning to the fray with a 6 second improvement to 2:27.77 winning her heat and being 4 seconds ahead of her best at half way showing how much more confident she has become in attacking the swims, just 0.5 seconds away from a CQT but hugely improving her CCT to pocket the silver.

Tom Holmes-Higgin’s good run went even further with a heat win and 2 second pb in the 50m Back with 36.46, in yet another CCT. As the meet reached its climax Adi Cooper went pb in 36.71 (pb), Owen Strakosch posted his own best with 33.05 and George Thorne picked up yet another CCT in 31.99, slipping inside 32 for the first time ever.

Anna Cooper swimming her first ever Open meet clocked a 4 second improvement in her 50m back with 48.64. Lydia Wisely swam spot on her pb with 37.48 and Emma Hockney dipped under 40 seconds with a pb of 39.78 and Abi Hewson first swim of the day collected bronze in a new pb & Regional Qualifying time for May 2019 with 32.28. This also reset the final Club Record of the day and just left the 50m Free splash & dash races to end the meet.

First up were the boys with Tom Holmes-Higgin completing a massive meet for his self confidence with another pb of 31.14, threatening the sub 30 barrier for the first time. Owen Strakosch showed just how it could be done, smashing out a personal best that did not bother with a 29 second effort, dropping straight to 28.20. Harrison Bullock dropped his best to 29.12 and George Thorne managed his as well, down to 27.43. Both Adi Cooper & Callum Bullock were just off their bests at the end of a full weekend and then it was the girls turn. Lydia Wisely continued the pb setting with 32.24 and Abbie Briers moved down to the 31 second bracket with 31.95 which brought in the bronze medal, improving her CCT before Abi Hewson finished the meet by going sub 30 in an individual event for the first time, her 29.20 being a CQT clocking and another bronze medal.

It had been an excellent weekend for the young athletes who look forward to the final round of the National League in December with the County Champs in January.

Several of them will also be swimming in the Club’s distance Championships being held on Monday at the John Warner pool in Hoddesdon.