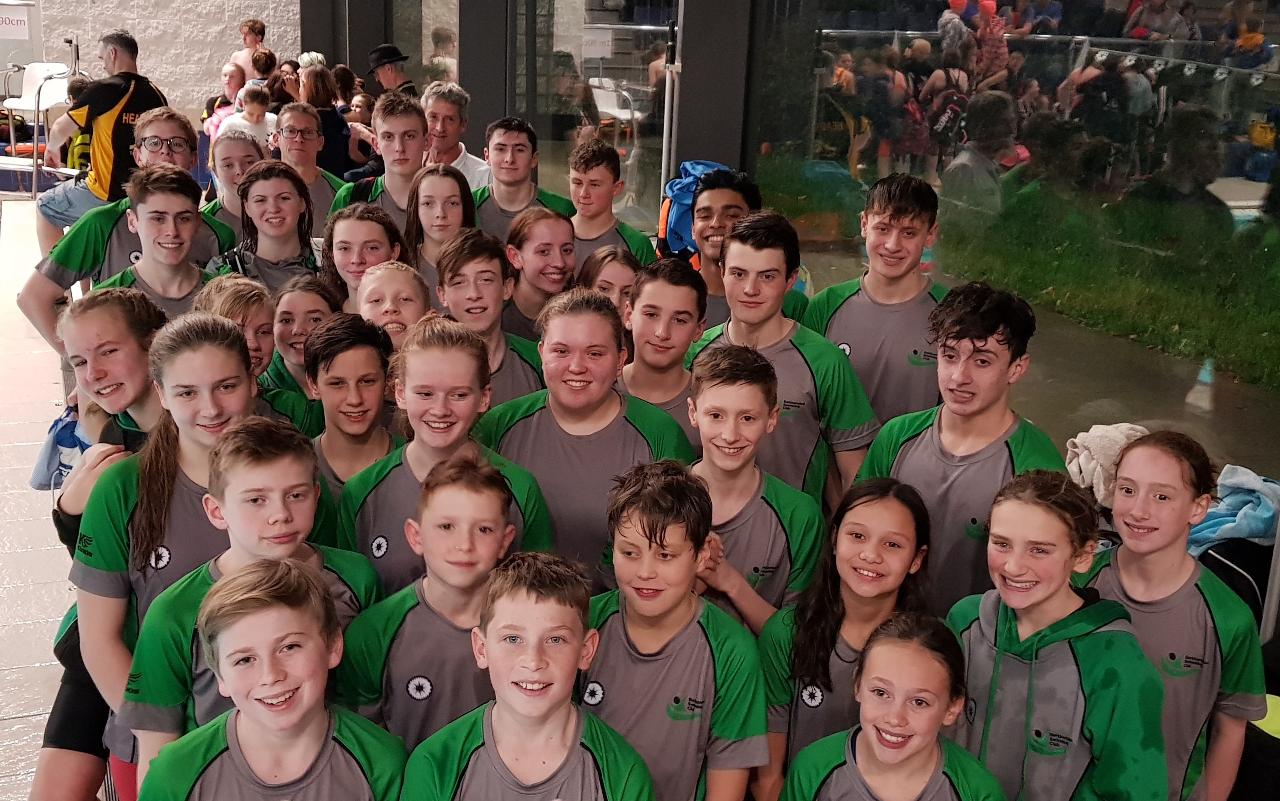 What a night and what a great selection of swims from all our swimmers, resulting in every swimmer to receive a black hat for their efforts as well as winning on the night, and what an atmosphere.

As you will see in the report below, the last race placing was questionable, after reviewing the video footage

, we believe we know why, it was the outboard motor strapped to James Chennells that caused the issue

Thanks also to the follow volunteers, without whom we could not support our swimmers and Club;

Officials - Clare Donohoe, Mark Strakosch, plus an official from Stevenage who stood in for us

Not forgetting Keith Fanham who volunteered as reserve.

The final few weeks of the Calendar year are always frantic in the swimming programme as athletes look for elusive qualifying times for County Champs in early 2019 and the National league campaign reaches its climax.

Berkhamsted SC had an exceptional night swimming at The Venue, Borehamwood in the 8th-14th place gala in their division of the London League of the National Arena Competition. In a wildly fluctuating night the overall win was in doubt until the final race, the always noisy and frantic Men’s Open 6 x 50m Freestyle which sees the big guys smashing out 2 frenetic lengths of frontcrawl amid the hubbub of noise.

The night began with the 2 senior swimmers on the squad Ellen Northwood and James Chennells in the 200m Individual Medley. Ellen Northwood rose to the occasion with her fastest swim of the year, improving her chance to swim at Counties with a 2:39.73 and then James Chennells, returning to his best after a 9-week long absence due to illness, dominated his race. Setting a new club 17 year old record (& personal best – pb-) for the first 50m of Butterfly he was always in control and came home 6 seconds clear in club record (Open & 17 years age), pb of 2:13.45. The evening was already rocking.

In the first set of relays, Issy Whitaker led off the 9-11 girls free relay with a pb of 36.98, followed by first timer Seren Diehl. Saff Harding and stalwart Eva Lawson to 3rd place in 2:25.66. Eric Batt, William Barnes, Ronan Philbin & Cole Moore repeated the 3rd place in their version as well.

In the 12-13 years Girls’ Free relay it was Tamsin Moren, with great underwater skills, on an unfamiliar backstroke leg who came was third at the first take over, Emma Hockney, Alex Farnham and Abbie Briers, with a first thirty point 50 free leg who also came in 3rd at the touch. Following a late withdrawal, the 12-13 boys’ squad was down to just 4 swimmers and Pierce Philbin, Alex Kalverboer, Tom Holmes-Higgin & Ezi Svichla-Fekete who recorded a time 6 seconds faster than their combined pbs in 2:36.45.

Evie Watson led off the 14-15 girls Free relay 3 seconds quicker than she has ever swum before with 31.81 followed by late call up Elliss MacNab, Club Captain Vicky Ayles and Abi Hewson in 2:10.71 and they were followed by the first relay win of the night from the boys 14-15 free relay of George Thorne, another late call up in Tom Stoker, Euan Donald who was another returning from a long term illness layoff and anchored home by Dan Chennells to win in 1:52.46. The Open Girls’ medley relay was Izzy Sansom, Caitlin Kelley, Ellen Northwood and Charlotte Watson was followed by another win for the boys as Owen Strakosch, Harry Thorne & Ish Rahim all swimming to their best put James Chennells in on the final leg in 4th place. A storming second 25m saw him transform that into victory by just over half a second in 1:59.78.

Issy Whitaker and Eric Batt gained further 3rd places in their 10-11 50m Back and Alex Kalverboer improved his pb and County Qualification time (CQT) with yet another 3rd in 1:27.46.

Abi Hewson then took up the cudgels despite suffering with an infection and led from the off to take the 14-15 Girls’ back in 1:11.09. Ellen Northwood made it a brace of 3rds for her, personally with her fastest 100m fly of the year posting 1:12.85 and improving her own County Consideration time (CCT) position.

The club’s pre-eminence in the fly races continued as Ish Rahim won the Open 100m Fly pacing things well and winning the race off the final wall where he took some 3m out of his nearest rival and then Eva Lawson had far too much for the rest of her opposition winning the 10-11 50m fly in a pb and improved CQT of 36.87. Ronan Philbin also picked up 3rd place in his fly with 43.26 (pb).

Abbie Briers is on a mission this season and lowered her pb and CCT in the 100m Fly picking up 2nd in 1:22.88 as she becomes an all round swimmer and she was followed by a reinvigorated Tom Holmes-Higgin slicing more than 4 seconds from his 100m fly best in 1:22.04, also stopping the clock in 2nd place.

Abi Hewson was right on her pb in claiming a CCT in the 100m Free with a gutsy 3rd and George Thorne closes remorselessly on a sub 60 for his free, improving for the second week in succession to a tantalisingly close 1:00.48 for 2nd.

Caitlin Kelley was disappointed with her swim in the Open Breaststroke but had no need to be as she sliced her best down by over 6 seconds!

Eva Lawson’s run of pbs continued in the 50m free where, although just touched into 2nd place her 32.11 further improved her CQT and place in the 10 years 50 Free ranking list.

Joe Harrison had a long wait for his first swim but did not disappoint lowering his month old best in the 50m free again for 3rd place in 35.80 as he learns about race skills.

Evie Watson surprised herself with another 3rd in the 14-15 100m Breast and Dan Chennells picked up 2nd for the boys.

Victoria Ayles picked up a place with her final 5m finish in the Open Free before James Chennells ended the individual races with a clinical victory in the Boys’ Open Free. His conservative first 75m saw him apparently under pressure at the last turn but his racing brain had enough in reserve to power off the last wall and come home well over 2 seconds ahead of his field.

Into the relays and, having led the gala at 2 separate points during their duel with Stevenage, the team were 11 points to the good.

Despite some super swims in the first few relays with Issy Whitaker, Saff Harding, Eva Lawson & Seren Diehl placing 2nd in their medley & Joe Harrison setting a 50m back pb of 46.00 leading off William Barnes, Ronan Philbin and Eric Batt to 4th in theirs, Stevenage started to gain the upper hand.

But, after the Girls Open 6 x 50 Free, Stevenage held the upper hand by just 1 point. It was all down to the final race.

Solid swims from Ish Rahim (26.40), Cam MacDonald (28.06), Dan Chennells (27.39), Owen Strakosch (27.42) & Harry Thorne (26.84) put James Chennells in on anchor in 3rd place but with work to do. He roared down the pool, closing the metres with every stroke but still seemed to have too much to do until the last 5m. His finishing effort looked, to everybody on poolside to have stolen the win. With the electronic timing failing for the only time on the night, the watches showed differently with the win being given to Hertford by just 2/100ths of a second after a thrilling race run off in a cacophony of sound.

After a long wait for the final results to be announced, a flawless night of no disqualifications, allied to some superb swimming saw Berkhamsted victors by just 4 points to cap a wonderful League campaign.