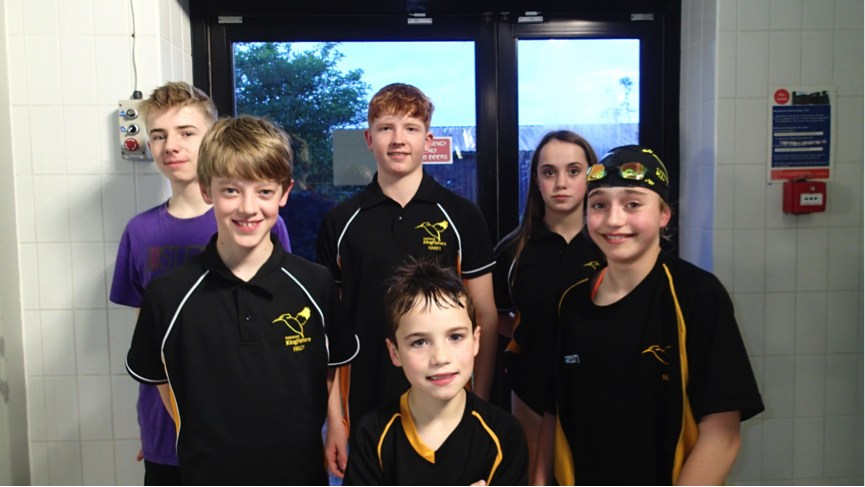 The Easter weekend saw Cheddar Kingfishers heading to Hutton Moor for the always-popular Weston-super-Mare Easter Swimming Meet.  The team of nineteen swimmers between them achieved 51 new personal best times (PB), and had 34 top ten finishes of which ten were in the top three.

Grace Cadwallader started the weekend for the Kingfishers with a new best time in the 200m Individual Medley. In the 200m Freestyle Tom Walsh improved by over 1.5 minutes to take sixth place, with team mate Harry Read also improving his time to finish in fifth. Grace Hurst also reduced her time by almost 1.5 minutes, with Olivia Iles also setting a new PB to finish in third place. The 200m Breaststroke saw further improvement for G. Hurst, Finley and Charlie Halford and Read.

In the 100m Individual Medley all the Kingfishers (C. Halford, Zara Bird, Jemima Seagrove and G. Hurst) set new PBs. The club had a very strong team in the 100m Freestyle in which Olivia Iles finished first, F. Halford second, and Jemima Seagrove and Issac Nichols fourth; while the remaining swimmers Phoebe Hillman, Josie Morgan, Ewan McClumpha, C. Halford and Sam Hutchinson either had a top ten finish or set a new PB or both. There were more PBs in the 100m Breaststroke for G. Hurst, Seagrove, C. and F. Halford and Hutchinson and another silver medal for F. Halford.

Tom Walsh was fifth in the 50m Backstroke, which saw Louis and Oliver Hurst battling each other with Louis finishing just ahead.  Bird, G. Hurst, Seagrove and Iles all set new times and O. Iles won the gold medal. Hutchinson and Nichols both set new times in the 50m Butterfly.

Harry Read was first in the 50m Breaststroke, making him the fastest boy at the meet, and G. Hurst was third, C. Halford was just beaten into fourth place. The rest of the team put in good swims with C. Iles, Seagrove, Cadwallader, O. Hurst, Hutchinson and George Young all improving their times.

This was another great result for the swimmers and a good reward for all the work put in by swimmers, coaches and parents.  Thanks to Weston-super-Mare swimming club for a friendly and well organized weekend of racing.