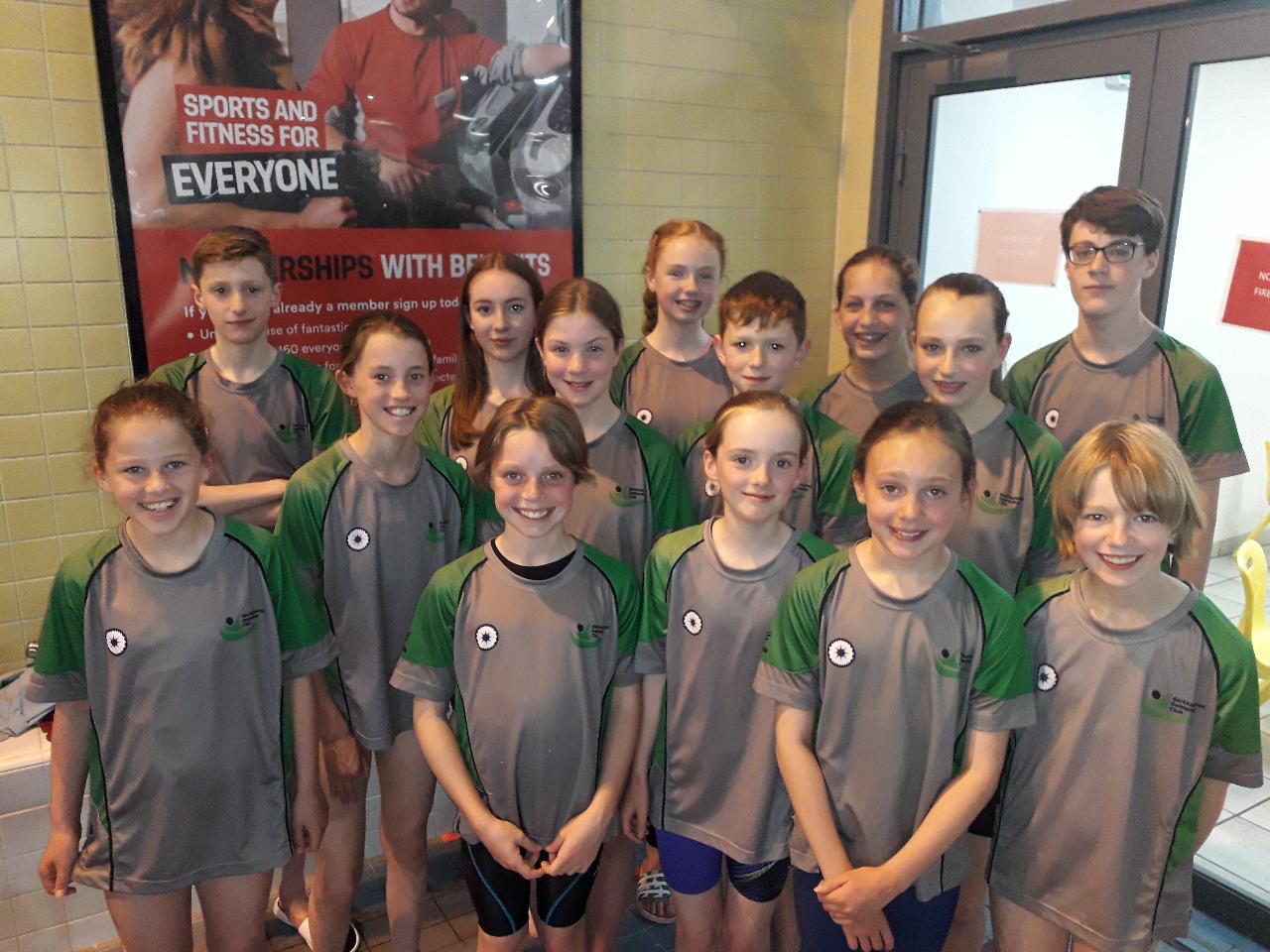 Provisional results seem to suggest a very good meet for the swimmers, pb's smashed all over the shop with some huge improvements, well done to all our swimmers

Also a very big thank you to all the parents who volunteered, without whom we could not do these meets

We have not yet had the official results but Geoff has entered all times manually into this system, to view these do the following;

How do I see what my swimmer's best times are as well as their meet results?

The first day began with the Boys 100m IM and pbs for Ezi Svichla-Fekete (1:38.72), Pierce & Ronan Philbin (1:30.81 & 1:25.04) with the brothers both winning their heats. Ezi took gold in his age group, Pierce 4th and there was a speeding ticket (S/T) and fastest of the day in his category for Ronan. Speeding Tickets (S/T) were issued for those who swam faster than the minimum entry time and represent big personal improvements for any swimmer obtaining one.

The girls 50m Breast produced pbs for Nell Farqhuhar (7 seconds 1:01.16) 4th place, Little (6 seconds 1:02.18) 6th place and Nell Coster (S/T 56.07). Seren Diehl looked to have won her heat and smashed her pb with 47.31 but was disqualified for a rule infraction but knows just how fast she can swim. Emily Jones clocked a 3 second pb for 4th overall in 52.52. New to the club, Mia Maslen-Wollington picked up the bronze in a new pb of 43.36 winning her heat, Millie Harrison posted 48.07 and another new swimmer to the club, 14-year-old Kiera Wharton picked up silver in her age with another pb of 42.72.

The 200m back for the girls gave Nell Coster yet another S/T as she stomped her way to 3:27.48, Hopper won her heat by a country mile to take Gold in 3:27.88, Jessica Rainbow and Little took 6th & 3rd respectively in their categories with 4:28.64 and 4:27.16 as they battled with each other in the same heat. But it was down to Lara Coster to cruise home in hr heat slicing more than 30 seconds from her best, coming in with 2:57.06 for the Gold medal and Kiera Wharton claimed silver with a 9 second improvement to 2:44.90 as she also won her heat easily.

The second session of Saturday began with the boys 200m Free and a bronze for Lorenzo Evans with possibly the biggest improvement seen of nearly 2 minutes claiming his heat win with 3:16.13. Eric Batt took silver improving his own time with 2:53.79, dropping 16 seconds with both boys showing how hard they swam with best times at 100m as well on the way through. Pierce Philbin took silver with 2:53.46 with his freestyle looking long and smooth all the way and Ronan a S/T and fastest of 12-year-old on the day with 2:42.71.

Phoebe Goss joined the pb party with her first ever open Meet swim resulting in a S/T and a best time of 35.70 taking her heat with a swim that looked as if she was an experienced swimmer it was so smooth. Lara Coster claimed bronze in 33.85 and Mia Maslen-Wollington took Gold in 34.33. Mimi Ayre made her one swim count taking Gold in 38.65 for another pb.

In their 50m Back the Philbin brothers both pocketed silver medals as Pierce won his heat in 41.36, narrowly pipping Ronan into 2nd with 42.30.

Lara Coster was back in action in the 100m fly and stormed home to yet another heat win and the silver medal, dropping 10 seconds to clock 1:31.73 with a powerful looking swim. Team mate Tamsin Moren took gold in the same age group, Lara being touched out in the final strokes of her heat as she finished 2nd but still improved 5 seconds to 1:22.52.

In the 100m Breast both Lorenzo Evans and Eric Batt were easy winners of their heats, picking up bronze and silver respectively in 1:34.86 & 1:42.98 and, again, both set half way pbs as well.

Phoebe Goss claimed her second successive S/T in the 100m Back winning her heat with a very smooth 1:34.00. Lara Coster picked up the Bronze with 1:24.55 and Tamsin Moren another Gold in 1:18.06 and another big pb. Mia Maslen-Wollington dropped her best to 1:23.57 and fastest S/T amongst the 12-year olds.

Day 2 saw just the 8 riders from the Club taking part beginning with the mixed 200m Fly, considered by some to be the toughest race on the programme. Kiera Wharton was the only BSC swimmer who stepped into the challenge and proceeded to lead out with a strong first 100m and led the heat until about 175m before touching out in a final 3:11.55 taking her best down by 13 seconds.

Both Philbin brothers carried on their pb setting in the 50m Breast as Ronan took silver in 48.01 and Pierce 5th in 49.28 after they had a race long battle in adjacent lanes in their heat.

Millie Harrison then finished her meet with a technically very adept 200m breast picking up silver in 3:41.81 and Mia Maslen-Wollington took around 5 seconds from her best with an even paced 3:35.73 to also pick up the silver medal.

Onto the final session and the Philbin brothers were re-joined by Ezi Svichla-Fekete, Kate Hopper, Mia Maslen-Wollington and the final first time representative for the club in Caitlin Walters.

The brothers finished with Gold and Bronze in the 50m Free both setting small pbs, Ronan 34.48 & Pierce 34.55 and Ronan took his heat win to boot.

Ezi Svichla-Fekete is gradually getting to grips with the technicalities of butterfly and, although disqualified for a stroke infraction should be pleased with the time, he finished in but he followed it with Gold in the 100m Back. Hs strokes are all looking good and his 1:31.97 was a 23 second pb.

Mia Maslen-Wollinington and Walters fought out their private battles in the 100m Breast where Mia just came out on top with 1:40.44 (pb) for Gold to Caitlin’s 1:46.82 for bronze also in a pb. Then to finish the day Caitlin Walters reversed the order in the 200m IM, taking bronze in 3:07.42 to Mia’s 3:08.72 with both taking more than 20 seconds off their previous bests.

A total of 69 swims had produced a remarkable total of 60 personal bests (including first time swims) plus 15 swims at interim distances which were also pbs; 12 Golds, 12 Silver, 10 Bronzes & 12 speeding tickets from a delighted squad of just 21 swimmers.