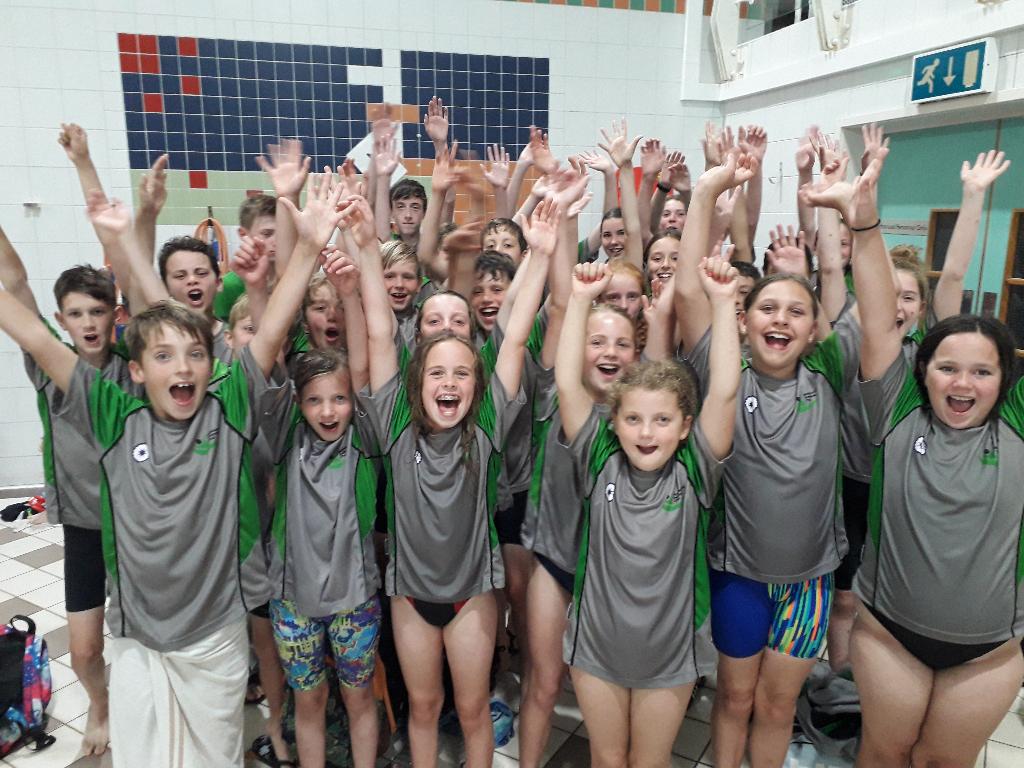 We came 5th in Division 2, an excellent job by all the athletes that took part across the three rounds.

Next up close to the end of the year will be the Herts Major League, look out for the Availability Event and sign your athlete up to join the BSC team.

Also a very big thank you to all the volunteers who helped across the three rounds, without your help we could not do these events for our athletes, so thank you all.

It is likely next season that we will have to host one of these meets so please be aware we will be asking for parental help for these please.

The final round of the Herts Peanuts League saw Berkhamsted at the Furzefield, Potters Bar pool, in the promotion gala from Division 2. Seeded 5th going into the final round it was always going to be a tough assignment to challenge the top teams.

Nell Coster started the meet with a 2nd place in the 10 years free after a long underwater phase and Ben Hanbidge was pleased with a technically good first ever League swim in the boys free with 20.88.

First win of the night went to Issy Whitaker with a pb of 38.69 in the 11 years back, again with good underwater skills off the turn whilst William Barnes was 5th for the boys.

Chrissie Soulsby and Cole Moore both improved their 50m Breast in the 12 years events to 45.06 & 50.75 respectively followed by Ava Bartlett romping home first in the 9 years girls free in her own pb of 18.50.

Phoebe Goss claimed 3rd in the 11 years 50m Free as did Riley Milne for the boys showing previously unseen speed with 38.19 to drop over 3 seconds and both the 12 year old backstrokers, Mia Maslen-Wollington & Eric Batt also improved to 38.40 & 38.00 respectively.

The club has struggled to put out 9 year old relay teams, having to put older swimmers in to give their 9 year olds races but Ava Bartlett teamed with Bea Miller, Katie Hockney & Bella Cliffe to post 1:20.88 and Jack Eastaff paired up with Barnes, Ed Eastaff & Ale Partridge to clock 1:20.66 for the free relays with Jack setting a new backstroke pb of 24.08.

Te final relays of the first half were the 12 years Medleys and produced 2 x 5th places for Mia Maslen-Wollington, Chrissie Soulsby, Kate Hopper and Emma Hockney & Batt, Cole Moore, Ezi Svichla-Fekete and Riley Milne, who swam up an age group for this one.

Bea Miller started the second set of individuals in the 9 years back, just off her best before Jack Eastaff dropped his 25m back best to 25.31 for 3rd.

Joe Harrison improved his fly by ¾ of a second after Jones had taken 2nd place for the girls. Ezi Svichla-Fekete was 3rd in his 50m Free following Hockney’s strong 2nd for the girls.

Heidi Batchelor-Hannaby & Noah Przygrodzki (pb 24.87) were both 5th in their 10 years backstrokes as was Charlotte Whittle in her first gala for a couple of years but slicing 4 seconds from her 50m breast pb to post 55.75 and Rocco Addati claimed 3rd in his breast too.

Kate Hopper showed huge improvement in her 50m fly, dropping over 7 seconds to go 44.31 as the individual races came to an end.

In the second set of relays Olivia Bridgeman lowered her free pb by nearly 3 seconds, leading off the 10 years free squad and Austin Clements improved his to 16.71 leading the boys.

Charlotte Whittle, Phoebe Goss, Isabella Whitaker & Emily Jones teamed up for 3rd in the 11 years medley before the 12 years girls picked up the club’s last win on the night in the Free relay, Chrissie Soulsby leading off to Kate Hopper, Mia Maslen-Wollington & Emma Hockney in 1:01.87.