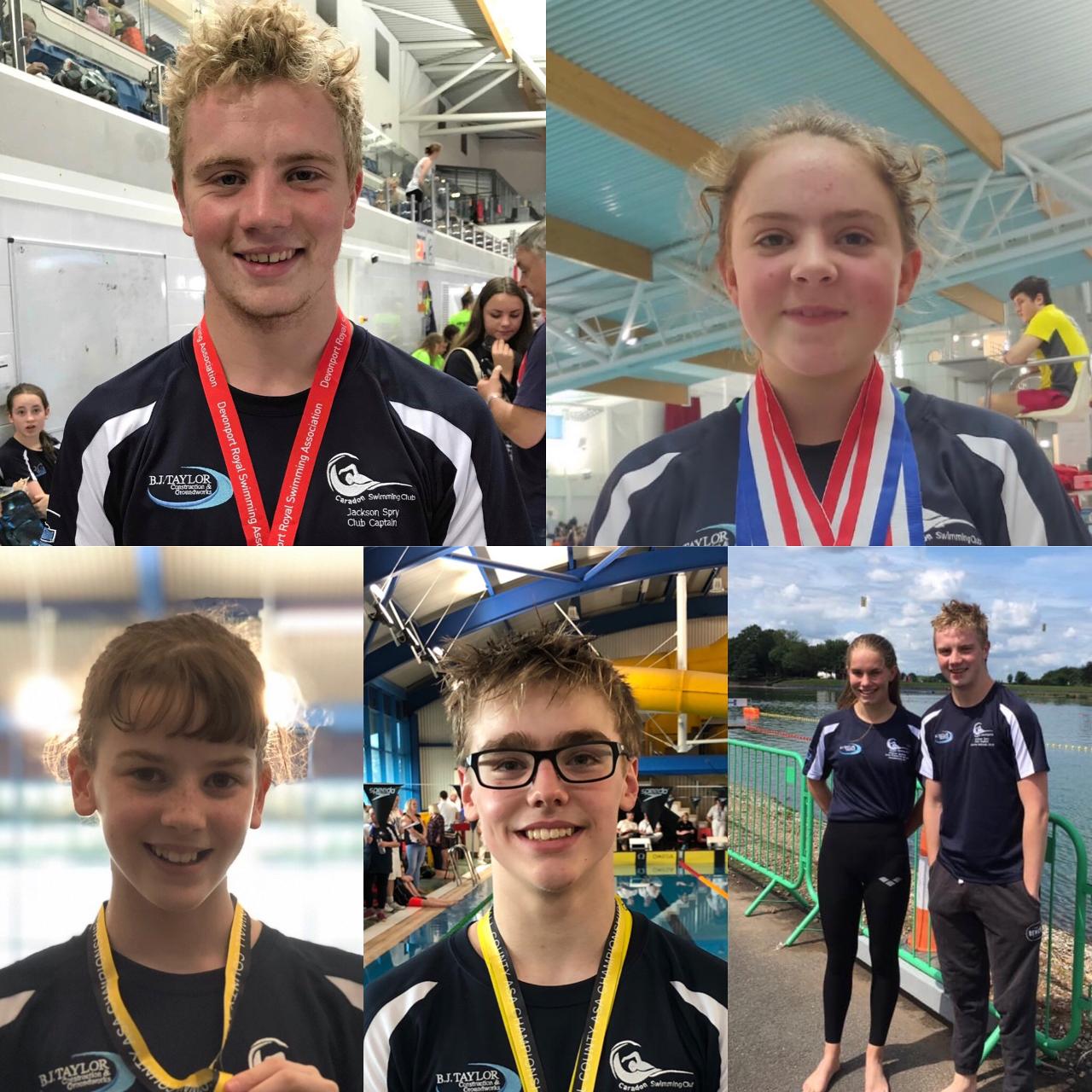 August was a busy and hugely successful period for Caradon Swimming Club. The South East Cornwall club has seen swimmers compete at the Welsh Open Meet, English Summer Nationals, Swim England Open Water Championship and the World Masters Championship in Gwangju, South Korea.
We should see coverage of this in this weeks Cornish Times on Friday and for next week in the Plymouth Herald.
Ollie Naylor, Olivia Shute and Katie Daniels all competed at the Welsh Open Meet.
Katie Daniels in the 12 years age group had a great meet. Having qualified in December for the Welsh Short Course meet, coming to Swansea for a long course event required her to increase her training to help her prepare for what was only her 3rd long course (50m pool) meet. Two fantastic performances in her 50 Free and 100 Back plus a solid swim in the 100 butterfly.
50 Free - PB in a time of 32.01 finishing 22nd
100 Fly - Long Course PB in a time of 1:29.20 finishing 30th
100 Back - PB in a time of 1:21.30 finishing 20th
Olivia Shute in the 13 years age group was a tough meet for Olivia who suffered a broken wrist less than 8 weeks before the meet. Olivia had less than a week of full training before the competition and performed amazingly to come close to her PBs.
50 Fly - in a time of 35.65 finishing 31st
200 Back - in a time of 2:54.46 finishing 27th
50 Back - in a time of 36.06 finishing 17th
50 Breast - in a time of 41.43 finishing 23rd
Oliver Naylor in the 15 years age group had a fantastic meet and performed to the best of his ability. Ollie has had a full season of hard training and finished the session with his best performances.
50 Free - in a time of 26.74. This huge personal best qualified Oliver for his first National final. He repeated this level of performance in the final, finishing 8th in a time of 26.78
50 Breaststroke - PB swim in a time of 36.69 finishing 24th
50 Fly - PB swim in a time of 29.85 finishing 17th
50 Back - PB swim in a time of 32.64 finishing 12th
Oliver, Olivia and Katie, now turn their attention to the Welsh Short Course Nationals in December.
Jackson Spry in the Open age group qualified for the second year in a row for the English Nationals in his strongest event, the 200m Backstroke. This event sees the 24 fastest English swimmers compete in Sheffield. Jackson raced early in the morning and put in a solid swim with a time just off his personal best of 2:14.63. This secured Jackson a place in his first National final. Jackson managed to find an extra gear for the final and improved on his time from earlier in the day, finishing 9th in a time of 2:13.86.
Jackson Spry and Aegean Bramley qualified for in the Swim England Open Water National in the 17/18 Age Group Unlike pool swimming, Open Water swimming offers a range of additional challenges: swimming in a large group, weather conditions, water temperatures, no lane ropes to name a few.
Jackson followed up a successful English National by competing at the English Open Water Championships less than 24 hours after his 200m National Backstroke final. Jackson was joined by teammate, Aegean Bramley, both competing in the 5km race.
Aegean finished 12th in a time of 1.06:53. Jackson finished 19th in a time of 1.04:52. Both had very impressive races, demonstrating their ability and quality to compete against the best swimmers in England.
Jackson season did not stop there. Almost straight after the Open Water Nationals, Jackson returned to Sheffield to represent Team GB in the U19 Underwater Hockey World Championships winning a World Silver medal.

Helen Kula-Przezwanski is one of Caradon’s Masters swimmers and now one of our Club Captains and travelled the 5800 miles to the 18th Fina World Masters Championships being held in Gwangju, South Korea. Helen produced outstanding swims throughout the competition starting with the 3k open water race, finishing in 5th place out of 20. A silver medal followed in the 200m individual medley and 200m backstroke and in the 400m Individual Helen beat her time set in June at the British Masters by nearly 3 seconds with a time of 6.25.59 and claimed the bronze medal.

Helen went on to swimto her first Gold medaland championship title in the 200m Freestyle but ended the competitiontriumphantlywith a second gold medal in the women’s 60-64 100m backstroke. Helen was totally dominant in the two length backstroke event, winning by more than eight seconds. Helen’s swimming time was 1:21.66, with Australia’s Vivienne Anthony taking second in 1:30.14 and claiming her second World Masters Championship title from the competition.