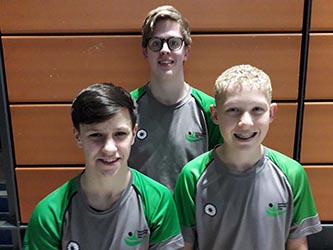 In an unusual move Herts County ran their distance events on 2 successive Tuesday nights at The Venue, Borehamwood and 3 Berkhamsted swimmers took advantage to further enhance the club’s reputation.

On the 14th Tamsin Moren, Alex Kalverboer and Owen Strakosch competed in the 800m events.

Tamsin Moren was first up and, in her now customary way, she attacked the race from the off being 6 seconds ahead of her previous pb swim at 200m and leading the field in her heat when seeded slowest of everybody in that heat. Forging on she was 12 seconds ahead at halfway as the rest of the field closed in. Swimmers did pass her but the gap over her pb continued to grow and she increased it to 18 seconds by the finish where her 10:22.54 placed her 6th overall and 5th in the heat.

Alex Kalverboer swam a much more conservative first half, cruising in 3rd in the heat for the first quarter of the race and then moving through into a strong 2nd place which he held until the finish at which point he was closing on the heat winner at a rate of knots, ending with a 6 second improvement and 7th overall.

Owen Strakosch showed yet another way of swimming the race with a very even split effort as he spread his effort evenly across the 32 lengths to come home in a 7 second personal best of 9:20.34 which was also a club record for his age group.

All 3 swimmers improved their seeding in the event with Owen Strakosch, who before the season began, had never had an individual swim at County Champs, coming away with a Bronze medal for his efforts to climax a great evening.

Alex Kalverboer was back the following Tuesday for the 1500m Free as the club’s sole representative and, once more did himself proud as he sliced 10 seconds from his previous record having got into what was possibly a too slow rhythm given his levels of fitness and the ‘engine’ he now has, but he should be justifiably pleased with his eventual 8th place in 19:41.28.