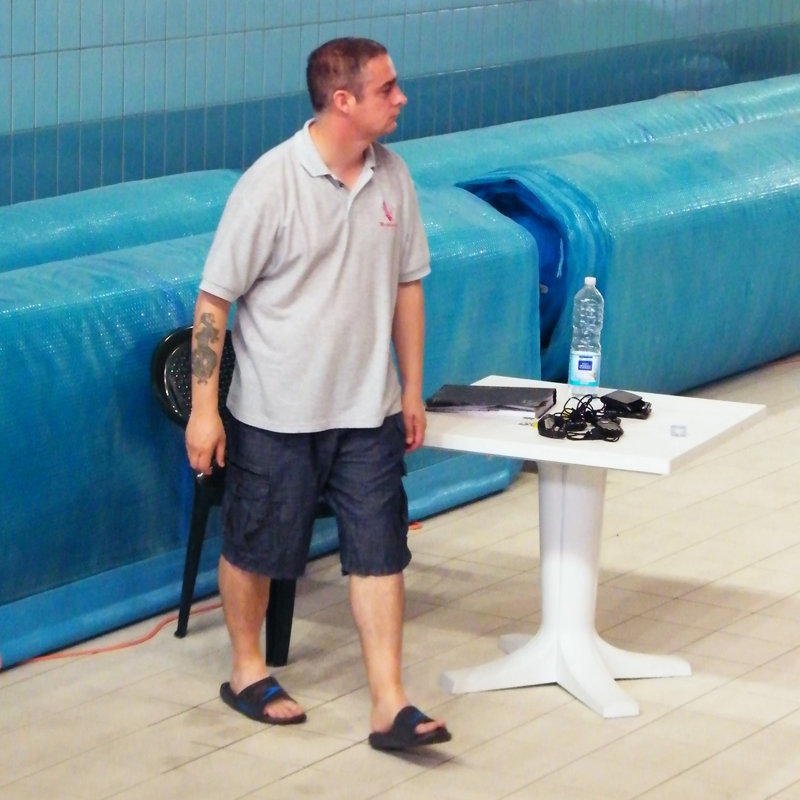 This award is presented to an individual who regularly goes above and beyond within aquatics and without whom the sport could not continue to run. They will have contributed towards the development and participation of aquatics at a local, regional or national level and have promoted the sport to all.
Ian started life with the Modernian SC as a swimmer in the mid ‘70s, when his father coached the club and then followed in his footsteps as a swim teacher and then a coach for over 25 years.
In 2003, as Junior Squad Coach, he was the driving force behind a total re-vamp of the club’s lessons. Following an outside review, he instigated changes such as in-house teacher training and using L1 teachers as administrators.  He also improved internal communications by setting up a club newsletter and re-introducing overseas training camps.
After a 9 month break due to work commitments he returned to the club in 2009 as its Head Coach, whilst still teaching in Luton and running a small business venture, The Swim Centre in Bedford. In this period Ian would coach poolside every evening and then go home and spend hours on research looking for information on skills, drills, nutrition and psychology. He introduced snorkels, alignment boards, Tempo trainers, lactate testing and heart rate monitoring and instigated a partnership with Optimum for a ‘strength and conditioning’ programme to supplement the land training that he had started a few years before.
Results from the county championships improved and the club held top spot for 3 years running with the numbers of swimmers qualifying for different events increasing steadily from 51 in 2009 to 72 in 2014. Similarly, the number of swimmers achieving regional qualification increased by 100% (from 14 to 27) as did the number of swimmers getting to nationals (from 5 to 10) across all strokes and distances. In 2012 Ian attended Olympic trials with Nicola Pasquire.
Ian’s swimming legacy doesn’t stop at the club. In 2011he helped set up an innovative scheme, the Modernians-subsidised Crash Courses, to help young people develop employment pathways in the sport and help children that would not otherwise be able to afford swimming lessons.  Between 2010 and 2015, under this initiative, the club developed more than 60 young volunteers, about 40 of which have become swimming teachers, and 5 have taken up coaching qualifications, benefitting from Ian’s mentoring, at the club or elsewhere.
Ian has always been innovative in his approach to coaching and keen to share ideas, knowledge and experience with other Modernians coaches and with coaches joining the club from elsewhere.
He is always approachable and is highly respected by swimmers, teachers, fellow coaches and parents – developing a great rapport and always supporting the underdog.
In 2014 he was appointed as the club’s Director of Swimming. This coincided with the arrival of a new head coach who was strongly supported, assisted and mentored by Ian when required. Late in 2015, Ian’s ‘proper’ job once again took priority and he stepped down to become an assistant coach.
Ian has chlorine in his veins and may that never change. His passion is for swimming and for the Modernian SC