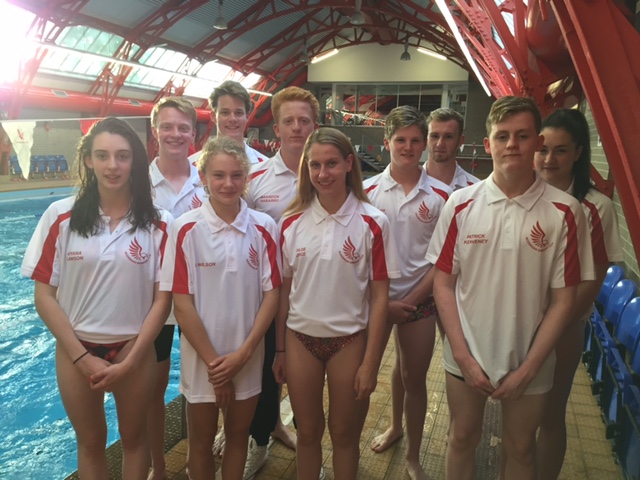 In their 50th anniversary year, 11 Modernian swimmers qualified for 50 events at National Championships this summer.
Jamie McCaffray kicked off at the Scottish Summer Meet where he won Gold for 1500 Free and Silver for 400IM and also made it to the 200IM final where he placed 5th. Then Llewelyn Wake and Nick Stalley travelled to the Swim Wales Summer Open where Nick finalled in both 50 and 100 Breast against tough competition. Llewelyn raced the 200 Fly, one of the toughest pool events and finished 12th.
Then it was up to Rother Valley Park, Sheffield for the National Masters Open water 3km event where Anne Wilson swam through to claim Silver. Daughter Tia Wilson emulated mum’s achievements the following day by claiming Silver in her age group in the 1.5km National Open Water event. Chloe Lence missed a medal by just 0.42 seconds in a tight finish in her age group with Aiyana Lawson and McCaffray finishing 9th and 12th in their age groups.
The action moved from Rother Valley Park to Ponds Forge for the British Summer Champs.
Oliver Maltby snatched the 100 Fly Bedfordshire County record in the first swim for the club and then went on to final in the 50 Back finishing 10thand 50 Fly to finish 8th. Becky Burton finalled for the 50 Breast and placed 10th. Lence, Lawson and Brandon Nabarro raced hard in their individual events coming close to their season bests.
Then it was on to the ASA Summer Championships which saw Peter Webster claim Gold in the 50 Fly with a County record and Silver in 50 Back. Lawson and Lence made their first ever finals at a national event in the 200 Free finishing 7th and 9th. Burton had to settle for 8th place finish in the 200 Breast final. Also making finals were Maltby also claiming another County Record came 6th in 100 back Wilson 6th in the 400 Free. Paddy Keaveney raced hard in his swims posting times close to his PB’s.
The Modernian swimming club Nationals campaign was a great end to this season! There are exciting times ahead as the club welcomes Balázs Sasvári as its new Head Coach from September.