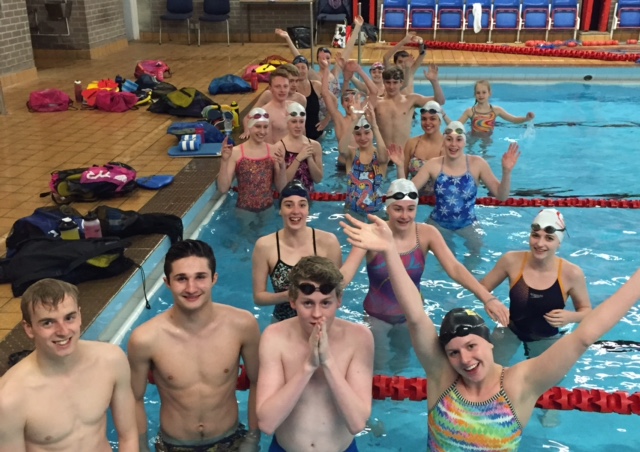 The Groundhog meet at Norwich was a successful meet for all swimmers. The swim of the meet was from Aiyana Lawson gaining her British Championship time for April in her 200 IM. This was fol-lowed a close second by Brandon Nabarro setting a new Bedford-shire County Record in the 200m Backstroke. Brandon was also unlucky to miss out on his British Championship times.
All of the Inter squad sets lots of new personal bests, with Eloise Bailey storming in her breaststroke leg of her 200 IM. Emily Jones set a very good PB in her 50m Breaststroke, as did Debbie Fridkin in her 100m Breaststroke. Orla Keaveney equalled her personal best in the 200m breast-stroke also, but I would like to point out the vast improvement in skills amongst these swimmers, which is a credit to themselves and their coach Louise.
Alexia Nabarro set a 7 second personal best in the 200m butterfly, missing her regional QT by 0.2, in the heat that included Chloe Lence and Kaelah Lawson too! This was a bit of a handful to time, so I entrusted a stop-watch to Chris Murphy who was a big help! Chloe stormed to a four second personal best too. Kaelah set some good pbs in her 400 free and 50 back.
Mea Roberts set some good personal bests in the 50 fly and 50 free narrowly missing her regional qualifying times. Emma Shoobert and Emma Burton sets lots of pbs in their events, as did Tia Wilson. Max Wilson swam out from the front in his races, challenging the other swimmers in his heat to keep up, and set a good time in the 100 backstroke.
Peter Webster and James Norman posted some very good times, all faster than in this period last year. Peter narrowly missed the county record in the 50 butterfly.
Jamie McCaffray swam two amazing medleys, posting regional qualifying times in both. Chris Murphy set a new personal best in his 50 Fly, not long after joining the team. Becky Burton swam some very solid swims, all faster than the same time last year, but the 200 IM was notably much better paced and three seconds faster. Gemma Trott also swam a good 200 IM, and won herself a chocolate bar in the process, as she set herself a very diffi-cult goal for her breaststroke leg. Hannah Hawkins swam amazingly on the Sunday in all of her events, but the pick for me was the 5 second personal best on the 200 IM. Nicola Pasquire, still recovering from a back injury, set faster times in her freestyle events than short course before Christmas, showing good advancements on her road to recovery.