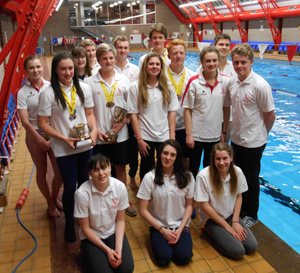 The recent ASA East Region Winter Championships at Inspire;Luton was a great meet for all Modernian SC Swimmers. They were all swimming on their personal best or beating their best.

Gemma Trott swam a fabulous 1.08 in her 100 Backstroke, and Kaelah Lawson swam a good 4 sec pb in her 800 Freestyle. Chloe Lence swam a fabulous 7 sec pb in her 400 Freestyle race. With her recent hard work paying off, Katie Shoobert raced hard and hit her bests in all her races closely followed by Nicola Pasquire, just returning from injury who swam very close to her pbs.. Hayley Alcock bowed out of her competitive swimming career for now, to concentrate on her studies, with and a ½ sec personal best in her 50 Butterfly. Aiyana Lawson, Nick Stalley and Max Wilson all swam well in their events.

Paddy Keaveney swam a great 200 Backstroke and set a 7 second pb. Oliver Maltby smashed his own Senior County Record in the 50m Butterfly winning the event with a swim of 25.28 secs. Brandon Nabarro accumulated 3 Silvers with fast paced swimming in the Breaststroke and 200 IM events.

Rebecca Burton swam the race of the meet in the final of the 50m Breaststroke. She broke the East Region Junior and Senior record and smashing her own county records posting a time of 32.30 secs.

The male 400 Medley team swam out of their skins to clinch the silver just behind Hatfield. Peter Webster broke the county record with a 57.89 on the Backstroke leg, Brandon kept the pace with Hatfield on the Breaststroke leg. Oliver Maltby swam his second 56 fly of the day on the fly leg and James Norman stormed home on the freestyle leg in a 54.08.

Modernians finished 6th in the region with 2 Gold medals and 5 Silvers. Between them, the swimmers managed to break 9 Bedfordshire ASA county records and 2 ASA East Region records.

Vicky, the club’s Head Coach said ‘I’ve been nagging the swimmers about their underwater skills and finally they are starting to show through in racing. Brandon is still perfecting his back to breast rollover turn in his IM, but he had two officials come over and comment about how good he was at it. Turns are also getting faster. I am pleased with the results from my swimmers this weekend’