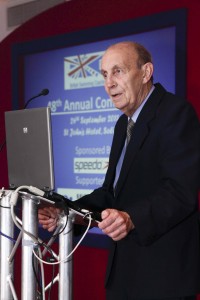 Modernian SC is saddened at the news that our founder, Charlie Wilson, passed away on Thursday 19th June 2014.
Charlie started his long relationship with swimming as a young lad and when he was appointed Master in Charge of Physical Education and English at Bedford Modern School in 1956, was given specific responsibility for all aquatic disciplines. He remained a competitive breaststroker until 1964 but prior to that he had qualified as an ASA Teacher, Coach and Tutor.
In 1965 Charlie founded Modernian Swimming Club which was accessible to all but with strong links to the school. In the same year he was also a founder member of the British Swimming Coaches Association. From 1969 he held many positions not only locally but nationally and internationally:
GB Team Coach 1969-78
Olympic Team Coach 1976
ASA Swimming Committee 1974-96
ASA Coach Certificate Committee 1968-96
Director & Tutor to ASA Teacher & Coach Education Certification Courses from 1966
Senior director/tutor of ASA Coach courses for the training of swimming coaches in Great Britain from 1975
Appointed to FINA as one of three coaches to lecture and advise on all aspects of coaching
Over the years Charlie has taught and coached thousands of swimmers and tutored and mentored thousands of swim teachers and coaches and left an indelible impression on all those who have shared his knowledge and expertise.
Charlie leaves a huge hole in the world of swimming as well as in the lives of his family. Our thoughts are with Catharine, Helen and Anne and their families at this sad time.
Rest easy Charlie, your legacy lives on in all those blessed to have known you…