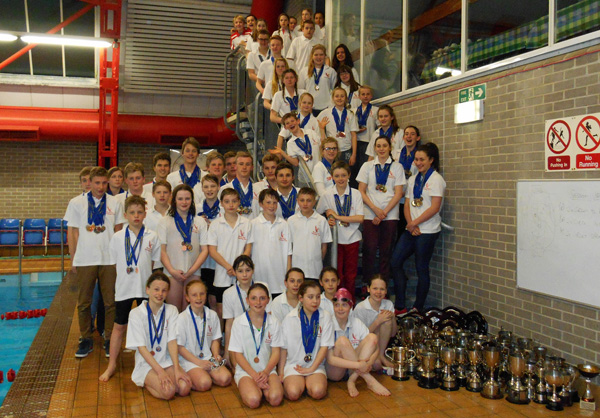 Modernian Swimming Club  exceeded all expectations at the Bedfordshire County Swimming Championships held over two weekends during March at Inspire:Luton  “...By every measure of success, the Club has achieved results that are unprecedented.”, said Ian Douglas, the club’s Director of Swimming. “...Club swimmers have broken records, won more medals than any other club and set new standards to qualify for regional and national competitions. As important, every swimmer is achieving their potential, with 245 personal best performances over 4 days of racing. The club is getting the basics right to build strength in depth. It is the basis of long term success”.

Modernian Swimming Club had 72 swimmers qualify for the championships. The club is nurturing future talent. In the younger 9 to 14 age groups, the Club won six of the twelve age group titles where success is measured across several events. The clubs investment in young people through learn to swim programmes as well as the transition to competitive swimming is where they  are pulling away from  rival clubs in Bedfordshire.

Success in the younger age groups is matched by the number of Senior and Junior County Champion titles won, in total 55 titles. Newly appointed Head Coach, Vicky Simpson, said “...There are many individual successes, far too many people to mention by name. Our best swimmers know what they’ve achieved. They deserve recognition as much for setting an example for others to follow as the records they’ve set or medals they’ve won.” Setting new records does stand out - Modernian swimmers setting 14 new County Short Course Records and breaking one East Region Record.

Club success in the relay events is a particular pleasure for the club’s chairperson, Jo Stalley. “...Of the 16 potential gold medals in the relay events, the club won 12. This shows our club is in top form, compared to other Bedfordshire Clubs. The relay events are thrilling to watch and galvanise our club spirit. It’s great to see a swimmer winning an individual event, but team performances stand out because they are a measure of the club’s strength and depth. Vicky added, “..We shall now take our County success to the regional stage where we aim, over the next three years,  to match the best clubs in the region“.

Overall Modernian Swimming club finished the County Championships on top of the medals board, with 129 Gold, 105 Silver and 58 Bronze medals. The Modernian medal haul amounts to 36% of the medals that could be won.(whilst Luton took 21% (80 of them gold), and the remaining 6 Bedfordshire clubs between them shared 43% of the medals). The medals total is a good indication of success across the board, but when you look below the surface, you see that the results are due to the quality of coaching and the club’s investment in every facet of the swimming pathway. The club is ambitious and success is measured as much by teaching young children to swim as it is by breaking records or heading the medal table at the County Championships.

Vicky concluded “...The team performance was amazing, supporting each other individually and as a team. The racing ability of individuals and the relay teams was fantastic and showed brilliant potential for the future”.