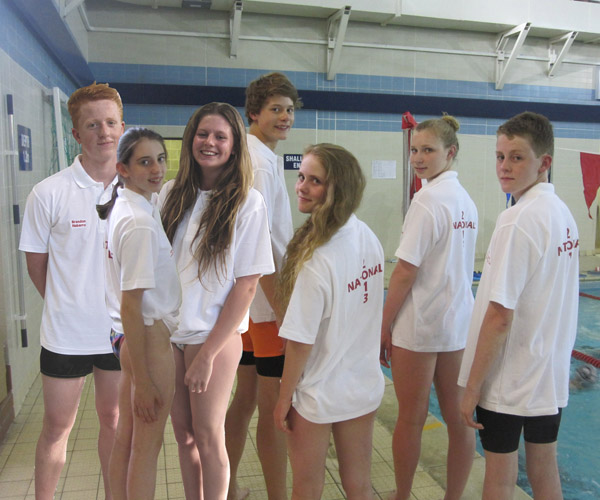 Over the last two weeks seven swimmers from the Bedford based Modernian Swimming Club have been competing at the National Youth and Age Group Swimming Championships at the 50m Ponds Forge pool in Sheffield.

The first competitors were the Age Group swimmers and 12 year old Aiyana Lawson started off proceedings with a great personal best time in the 200 Individual Medley finishing 14th overall. This was a great result in her first swim at her first national championships. Aiyana had another four swims swimming just outside her personal best in three but her best placing came in the 100 Breaststroke finishing 12th overall with a new personal best time of 1.20.07.

Paddy Keaveney, 13, was the other Modernian Age Group swimmer and he had six swims finishing between 13th and 22nd in all of his swims. Having competed in the Irish Nationals the previous week, winning two gold and five silver medals, Paddy was competing in his second Nationals and saved his best swim until the end swimming a good personal best time of 5.07.91 in the 400 Individual Medley. His highest place finish was in the tough 1500 Freestyle event where he finished 13th in a time of 18.00.95, just outside his pb.

Peter Webster was first up at the Youth Nationals and he swam two events. Last year he made the semi-finals in the 200 Backstroke but this year he was at the bottom end of a double age group so the going was tough and he finished on his pb making him the 16th fastest 15 year old. In the 100m event he swam a pb and finished the 18th fastest 15 year old. Brandon Nabarro showed his versatility qualifying for five events. His best event was the 200 Individual Medley where he qualified for semi-finals and finished 16th overall. In all of his other events he swam on his pb finishing his week off with the very tough 400IM. Rhiannon McCaffray qualified for two of the toughest events, the 400IM and the 200 Butterfly. After a long season Rhiannon was just off her pb's but competed hard and came home in respectable times.

Nicola Pasquire and Hayley Alcock both qualified for two swims and both had one disappointing swim and one excellent swim. Nicola had a fantastic 2km Open Water swim finishing 9th overall whilst at the bottom end of a double age group. This year Nicola has been on the England Talent Programme specifically aimed at distance and open water swimming and this result showed how much she has developed over that period. Two days later Nicola had the 800 Freestyle but found it hard to repeat her heroics of the open water swim and missed her pb. Hayley started her nationals off with the 100 Butterfly but unfortunately her hat came off and her goggles filled up as she was swimming. It took a lot for Hayley to finish the swim and as such her time was off her pb. However, in her second event Hayley well and truly made up for it with a new pb and County Record in the 100 Breaststroke. Hayley turned second at 50 and then powered ahead to win her heat and qualify for the semi-final. She finished 17th overall and showed her true potential and ability.

All seven swimmers represented the club with pride and are looking to qualifying again next year. There were very few clubs as small as Modernian SC there with seven qualifiers and Chief Coach Ian Douglas said 'These seven swimmers deserve this for all the hard work and dedication they and their parents have put in over the season. Next year we hope to have even more swimmers qualify and to make more semi-finals and finals.’